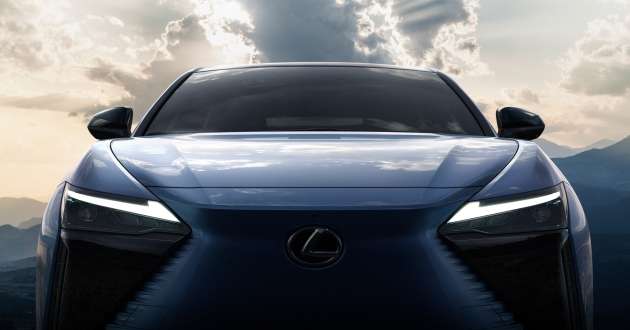 The Lexus RZ, the brand’s first-ever dedicated battery-electric vehicle, will make its global debut on April 20, 2022, the Japanese carmaker announced recently. The electric crossover was previewed by the LF-Z Electrified concept last March before a production version was shown during Toyota’s big electric vehicle showcase near the end of 2021.

To go along with its latest announcement, Lexus also gave us our first look at the RZ’s interior, which bears similarity to said concept. The main attention-grabbing detail is the steering yoke just like what you’ll find in the latest Tesla Model S and Model X – it’s not clear if Lexus will offer a regular steering wheel for customers who prefer something familiar in their hands.

We also find a driver-centric cockpit with a digital instrument cluster as well as a modestly sized touchscreen infotainment system angled towards the driver. The latter integrates the car’s media and climate systems into it, but there are still physical dials to control volume and temperature – two things that most users will fiddle with on their daily commute.

Elsewhere, the engine start button is located close to the high-mounted air vents, while the centre console houses the gear selector, electronic parking brake, traction control button and two cupholders. The RZ also has triple USB-C ports, a wireless phone charger and a head-up display, based on what we can see. 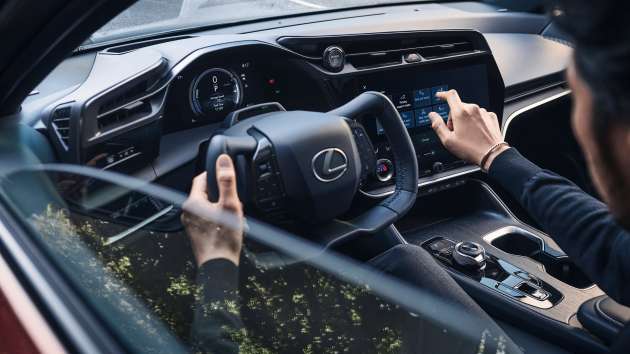 Just like the interior, the exterior of the RZ also stays relatively true to the show car that previewed it. Key design cues include the “spindle body” front end that mimics the grille on Lexus’ petrol-powered models. There are also black panels beneath the sharp headlamps (with boomerang-shaped DRLs), black wheel arch flares, a kinked window line and full-width taillights.

The RZ is reportedly a posher version of the Toyota bZ4X, suggesting it rides on the same e-TNGA platform (Lexus could have its own fancy name for it) that is also shared with the Subaru Solterra. The RZ 450e will be one of the variants available, and it will likely come with two electric motors for all-wheel drive (as hinted by the Direct4 badge).