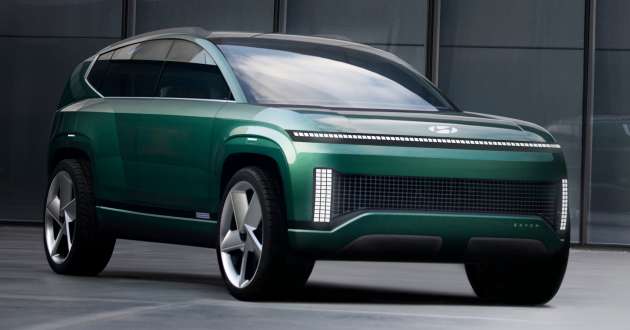 Hyundai has unveiled the Seven concept at this year’s LA Auto Show, which previews the upcoming Ioniq 7 SUV. The Korean carmaker’s electric sub-brand was launched back in August last year, with three models being announced at the time. The first to arrive was the Ioniq 5, which will be followed by the Ioniq 6 next year, while the Ioniq 7 completes the initial trio when it comes to market in 2024.

The Seven is referred to as a sport utility electric vehicle (SUEV) and is based on the Hyundai Motor Group’s Electric-Global Modular Platform (E-GMP). Powertrains details are limited for now, but we are told that the concept was engineered to achieve a target range of over 483 km (300 miles). Hyundai also adds that in a real-world situation with a 350-kW charger, the Seven can get from a 10-80% state of charge in about 20 minutes.

In terms of design, the Seven looks unlike most SUVs of today, featuring a low, leading edge of the bonnet as well as a single, streamlined roofline, both serving to deliver an aerodynamic profile. The Ioniq brand’s signature Parametric Pixel lights also make the vehicle easily identifiable from the front, which incorporates active air flaps that deploy or retract depending on brake-cooling or low-drag requirements.

Equally as striking is the hulking rear end, which has the same Parametric Pixel setup surrounding a large rear window. Those vents aft of the rear wheels are also functional, as they are part of the concept’s Hygiene Airflow System, extracting air that comes in through the roof rails and out of the cabin. 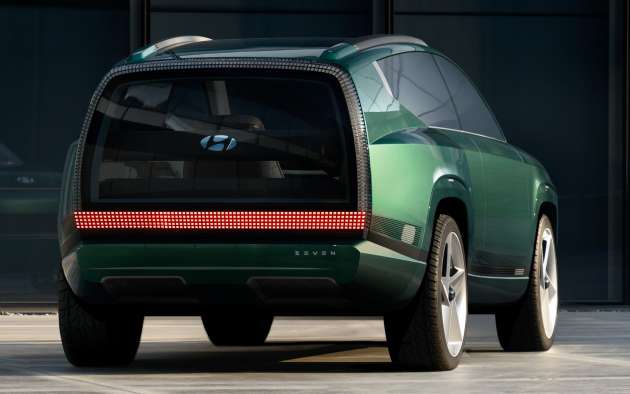 Speaking of the cabin, the Seven’s wheels are push as far outwards to allow for a wheelbase of 3.2 metres that can accommodate up to three rows of seats. The use of the E-GMP architecture also creates a flat floor, which Hyundai says “opens new opportunities to furnish the interior like a premium lounge.”

Since this is a concept and not a production vehicle, there’s an unconventional interior greeting passengers that enter through the pillarless coach doors. Hyundai notes that the Seven embodies its future vision of autonomous mobility, so there’s no need for the usual driver’s equipment.

There aren’t even regular seat rows either, as they have been replaced with an L-shaped sectional couch and swiveling seats. The driver’s seat closest to the windshield does come with a retractable control stick that hides away when not in use, while integrated screens add to the lounge-like experience. 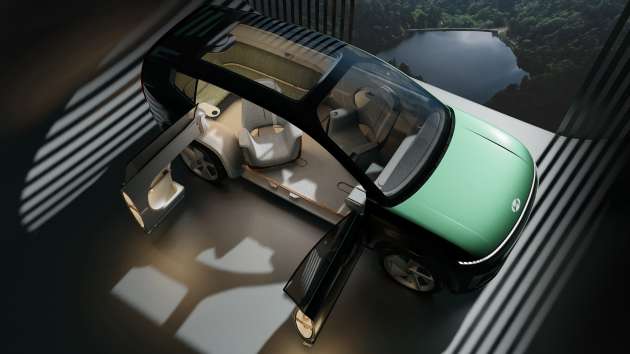 Also present inside the cabin is a Universal Island console that is designed to home appliances like a mini-fridge and a shoe-care compartment for footwear. The roof features a panoramic OLED screen that can display various content and can change the overall atmosphere of the interior, along with an ambient lighting system.
Sustainability is also a focus for the Seven, with bio-paint applied to its exterior, while hygienically-recycled and renewable materials are used for the interior. On the latter, you’ll find mineral plaster, bamboo wood and carpet, bio resin and interior paint based on renewable sources.

Hyundai adds that it used copper and hygienically treated fabric with proven antibacterial functions to ensure all surfaces inside the Seven remain clean at all times. This is supplemented by a UVC Sterilisation system that activates UVC lights to eliminate bacteria and viruses once the vehicle is vacated of its passengers.

While these features do sound intriguing, it’s important to remember the Seven is just a concept, so expect certain elements to be toned down for the production Ioniq 7 it previews. The end product will reportedly be sized close to the Palisade and competes against other electric SUVs of this size like the BMW iX, Rivian R1S and Cadillac Lyriq.