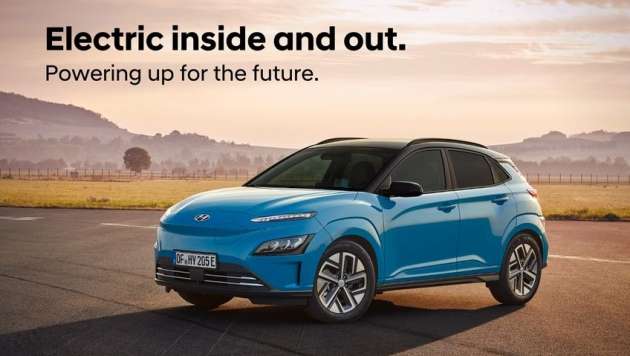 Not long to go before the Hyundai Kona Electric facelift makes its official Malaysian debut, with Hyundai Sime Darby Motors (HSDM) announcing via a Facebook post that the full-electric SUV is set to be launched next Thursday, on November 18, with the event beginning from 10.20am.

We already know that three variants have been confirmed for our market. These are a base 39.2 kWh model, available in two guises known as e-lite or e-plus, and a range-topping e-max 64 kWh version. Official prices haven’t been revealed, but is estimated to start from under RM150k, which would make it the most affordable EV in the country when it arrives.

That estimated price is however inclusive of the import and excise duty exemptions as outlined by the government during the recent Budget 2022 announcement, so actual market deliveries look like they will happen only from next year.

Regular AC charging with the single-phase 7.2 kW onboard charger will take six hours to juice the battery from 10% to 80% SOC in the base model and nine hours, 15 minutes with the 64 kWh. Charging times go down to four hours and 20 minutes and six hours and 50 minutes respectively with an optional three-phase 11 kW onboard charger.

Three exterior colours will be available for the Kona Electric, and these are Chalk White, Misty Jungle Two Tone, and Dive in Jeju Two Tone. As for the interior, there’s a choice of black or grey. Even though prices haven’t been finalised, the order books have already been opened, and with a RM1,000 deposit, you can place an order for one here.