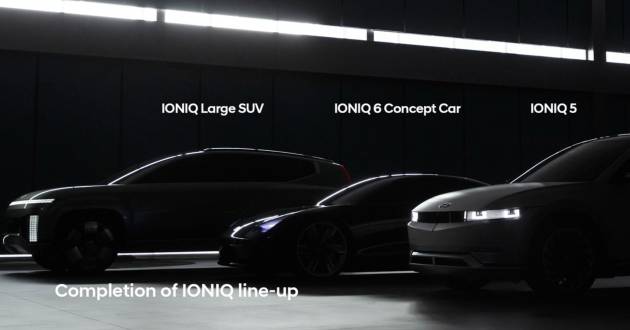 When Hyundai announced its Ioniq electric vehicle sub-brand last August, the Korean automaker said there would be three models to make up the initial range of offerings, all built on the company’s Electric Global Modular Platform (E-GMP).

The first to arrive was the Ioniq 5, and this will be followed by the Ioniq 6, which is a sedan previewed by the Prophecy concept, in 2022. Completing the trio is the Ioniq 7 that we already know to be an SUV, but a new teaser released during this year’s IAA Mobility event gives us a much clearer look at the upcoming model set to arrive in 2024.

Firstly, this will be a big SUV, with prior reports claiming it to be comparable in size to the three-row Palisade. Based on what is shown in the teaser, this certainly appears to be the case, and given the use of a dedicated EV platform, the Ioniq 7 looks to have a more significant wheelbase by comparison.

Design-wise, the SUV features slow-rising windscreen that meets with a sloping roofline to give a slippery silhouette. This is helped along by a face that lacks a conventional grille, replaced with a full-width LED light bar placed above a small lower intake flanked by vertical LED headlamps

Along the sides, you’ll find a kinked window line that points up vertically midway along the rear pillars, while squared wheel arches are accompanied by some futuristic-looking wheels. As there’s still some time to go until the 2024 debut date for the Ioniq 7, this is likely an early concept and we should expect a near-production prototype to be presented in the coming months.

The E-GMP is designed with modularity in mind, and since the Ioniq 7 is a longer vehicle compared to the Ioniq 5, there is room for a large battery pack. The automaker has already confirmed this in May, saying the Ioniq 7 will have a capacity of 100 kWh and an 800-volt electrical architecture, both linked to a dual-motor powertrain capable of 313 PS (308 hp or 230 kW).

#Hyundai will electrify its entire model line-up in Europe by 2035, and by 2040 in other major markets.#CarbonNeutrality2045 #PositiveEnergy pic.twitter.com/YensZG6zvg