January 1, 2023 brought a new federal tax credit of up to $7,500 for US consumers who are in the market for electric vehicles.

As you are about to see, things are not that simple. The new terms introduced by the Inflation Reduction Act (IRA) limit the number of EVs that currently qualify, mainly because of local US manufacturing requirements.

The full $7,500 tax credit will be available to individuals reporting adjusted gross incomes of $150,000 or less, $225,000 for heads of households, or $300,000 for married couples filing jointly. Assuming you qualify, let’s see what electric vehicles you can buy that allow you to benefit from the full $7,500 tax deduction.

Main requirements for EVs to qualify

In order to be eligible for the full tax credit, an EV must have final assembly in North America by a qualified manufacturer, a battery size of at least 7 kWh and a gross vehicle weight rating less than 14,000 pounds (6,350 kilograms).

Battery electric vans, SUVs, and trucks qualify for the revised credit if their MSRP is below $80,000, while other EVs that don’t fall in the above category – mostly passenger cars – have an $55,000 MSRP limit.

The IRA has also added battery manufacturing requirements, but those haven’t been enforced yet; the US Department of Treasury has delayed a decision on applying the battery guidance at least until March 2023.

With that out of the way, here’s the list of electric vehicles that currently qualify for the federal tax credit, as per the Internal Revenue Service (IRS). For reasons that are explained below, the list is provisional and will most likely suffer changes in the coming weeks and months. We’ve also deliberately left out plug-in hybrids – yes, they also qualify for the full $7,500 tax credit.

As you can see on the table above, besides the Ford E-Transit, F-150 Lightning and Mustang Mach-E, all the other Ford and Lincoln eligible vehicles are plug-in hybrids. It’s also worth noting that the Mach-E is not classified as an SUV, which is why it is subject to a $55,000 MSRP limit. This means that only the base Mach-E Select and mid-range Premium trims qualify for the full tax credit.

It’s no surprise that the Chevrolet Bolt EV and Bolt EUV have made the list, but it’s unexpected to see the Cadillac Lyriq not classified as an SUV. The $55,000 MSRP limit means no Lyriq trim qualifies for the full tax credit – the 2023 Cadillac Lyriq starts at just under $63,000 – which is why we crossed it off the table.

There are no surprises here: the entire Nissan Leaf lineup qualifies for the full tax credit. The Nissan Ariya is made in Japan and is therefore not eligible.

Rivian’s both consumer electric vehicles – the R1S and R1T – qualify for the full tax credit, but there’s a catch. Only Dual Motor variants are priced below the $80,000 MRSP threshold, but the thing is they are not on sale yet. Rivian currently builds and sells Quad Motor models, with the Dual Motor configurations to become available sometime in 2023. 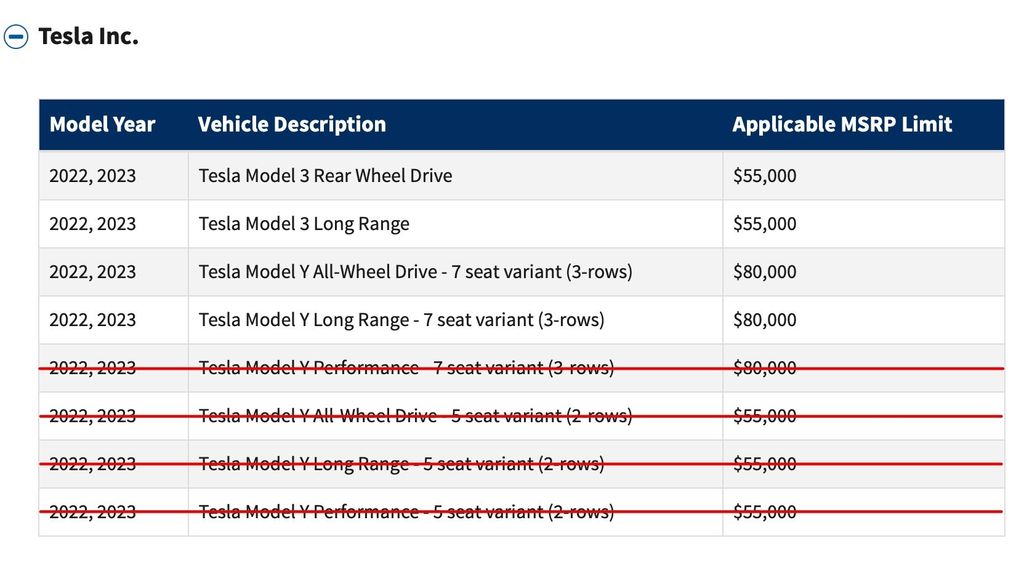 The Tesla Model 3 and Model Y are eligible for the full tax credit, but not all trim levels – not even all those you see in the table above. The Model 3 RWD and Long Range make the cut, but the Model 3 Performance does not, because it’s more expensive than the $55,000 MSRP limit.

The entire Volkswagen ID.4 lineup qualifies for the tax credit, even though only AWD variants are classified as SUVs. Rear-wheel-drive ID.4s have a $55,000 applicable MSRP limit.

A work in progress

As you can see, the list is quite short, but more electric vehicles will likely be added in the coming weeks and months. The IRS notes that a number of automakers have entered into written agreements to become a “qualified manufacturer” but haven’t yet submitted a list of specific makes and models that are eligible.

Those manufacturers include Hyundai, Kia, Mazda, Mercedes-Benz, Mitsubishi, Subaru, and Toyota. With the exception of Mercedes-Benz, which makes the EQS SUV in Alabama (and will also make the EQE SUV there soon), none of them currently assembles EVs in North America. Mind you, several automakers, including Hyundai and Kia, have announced plans to build EVs on the continent in the coming years.

As for the inconsistencies in the way the IRS classifies EVs, they should be sorted out as soon as possible so that a level playing field is ensured for all automakers. This will also result in customers having a wider selection of EVs to choose from.