You’ll be heading to three of the world’s best-known race tracks in this week’s new set of GT Sport Daily Races, as two one-make races headline the offerings for the next seven days.

This week’s Race A features one of the more unlikely choices of race car, with players getting to grips with a large sedan. The Toyota Crown Athlete arrived in GT Sport comparatively recently, in December 2019 alongside Laguna Seca and the Ford GT. Unsurprisingly it’s dropped a little under the radar, but you’ll need to race it in the one-make event.

Players will need to hustle the Crown’s weight — though the BOP system has removed a fair chunk of it — around the Fuji International Speedway for a three-lap race, on Sports Hard tires. The last sector in particular should prove interesting.

There’s another one-make race for the second event, but in something a good deal more sporty. It’s also a three-lap race, but this time around the Nurburgring GP course. You’ll be using a 997-generation Porsche 911 GT3, and that should make for a fairly heart-racing event.

Finally, this week’s endurance race takes you to the Brands Hatch GP circuit in the UK. For this 13-lap race you’ll be taking charge of any Gr.4 car of your choice. This is a category for road car-based racers, stripped-back road vehicles with race-ready parts. You can pick any of the Gr.4 cars you have in your garage for this race.

One consideration here is the required tire restrictions. Though tire wear is set at a mere 6x multiplier, you’ll need to make at least one pit stop during that race. That’s because both the medium and the soft compounds are mandatory — you must use each for at least one lap during the race. We’ll likely see some interesting tactics at play here, not least because the pit entry at Brands Hatch is pretty severe, and the pit exit spits you out right on the racing line for Paddock Hill…

These three races will run through to Monday, December 7, when another new set of three will replace them. 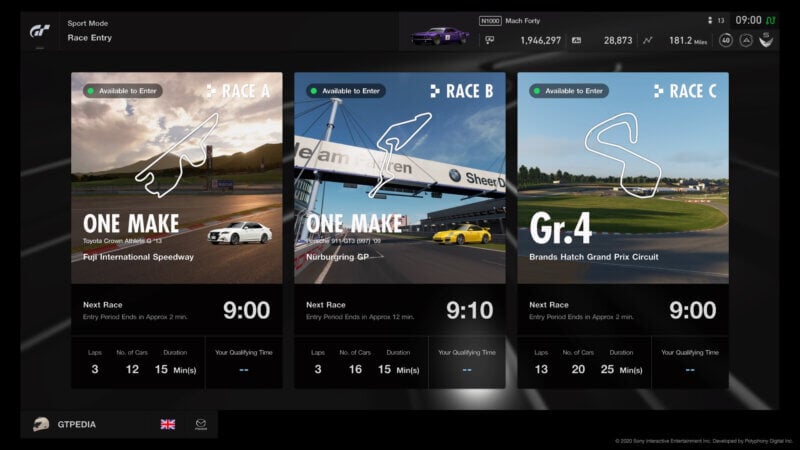