The first new GT Sport Daily Races of spring (or autumn if you’re reading this in the southern hemisphere) bring up a pair of one-make road car races for the classic front-engine, rear-wheel drive layout to get your teeth into for the next week. There’s two fictional circuits in the mix, and a blast from the past event based on a real-world endurance race too.

Race A provides that look into GT history. It’s a six-lap event around the short Tsukuba Circuit, a track well known for its time attack antics as well as those Best Motoring videos which were part of the inspiration for Gran Turismo. Of course there’s no other reasonable choice for this event than the Mazda Roadster, here in its modern, fourth-generation — or “ND” — guise.

There’s a real, annual four-hour endurance race at this circuit in these cars, and it’s something we’ve seen in previous GT games too. The car is provided for you, so all you need is to pick a color and practice your grid starts.

You’ll also be put into road cars for Race C this week, which takes you to another Japanese circuit but this time a fictional one. The Kyoto Driving Park will play host, with the longer Yamagiwa circuit as the venue. It’s another one-make event, but this time it’ll involve cars from your garage, so expect plenty of variation in liveries.

For this event, the car will be the 2020 version of the new, fifth-generation Toyota Supra, known as the GR Supra. As this is the endurance race spot, this could almost be a round of the GR Supra GT Cup, although we’re yet to hear of a third season for this championship.

You’ll need to be aware of the tire requirements. Although the car can make all ten laps on either tire, you’re required to use both the Sports Medium and Sports Soft grades for at least one racing lap each during the race. That will result in almost all of the field running one lap on the medium tire to start the race or to finish the race, with the other nine all on the softs.

Race B is a stalwart of GT Sport, putting you into your choice of Gr.3 car for a four-lap race of the Lago Maggiore circuit in GP configuration. There’s no details to fret about here, so just pick a car and go racing.

These three races will run through to Monday, March 29, when another new set of three will replace them. 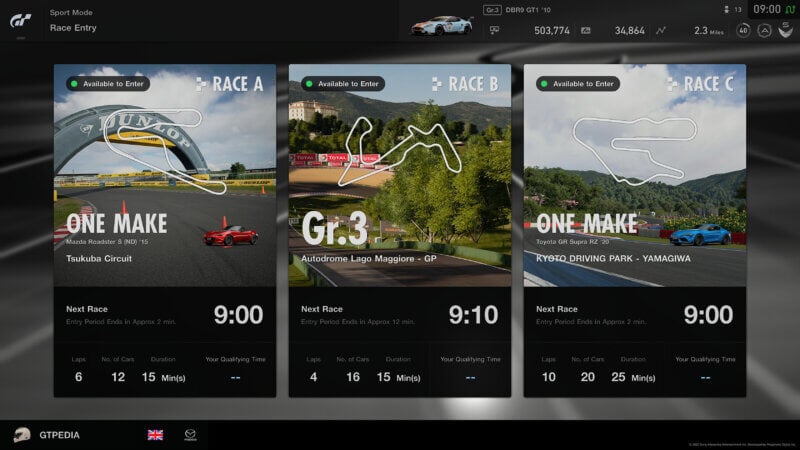