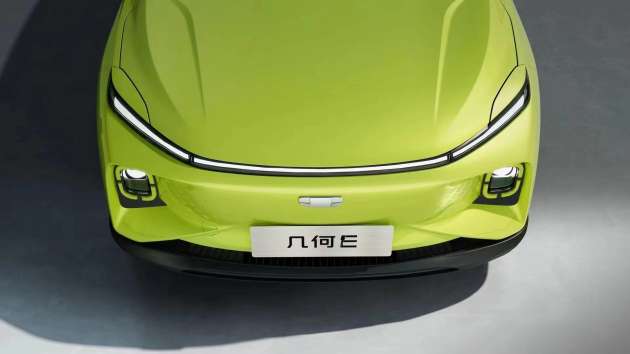 Geometry has released the first teaser images of its upcoming electric vehicle, which will simply be called the E. According to CarNewsChina, the E actually had a different, quirkier name prior to the latest announcement, the Thunder Tiger, although it seems the Chinese carmaker has had a change of mind.

As such, the EX3 Kungfu Cow that was revealed last September is the only vehicle in the carmaker’s line-up with an animal-themed name for now. Like the Kungfu Cow, the E is a small crossover with small dimensions, measuring in at 4,006 mm long, 1,765 mm wide, 1,550 mm tall and with a wheelbase of 2,485 mm.

By comparison, the Kungfu Cow is 4,005 mm long, 1,760 mm wide, 1,575 mm tall and its wheelbase spans 2,480 mm. While both are of similar sizing, the E is a lot more modern in appearance, based not only on the teasers, but also by photos published by China’s ministry of industry and information technology last month.

Standout cues include a wide-width light bar, which sits above a blank grille and the car’s primary headlamps – it’s a split design. The body panels are also different, as evident by the distinctive creases on the doors and contemporary designs of the door handles and side mirrors.

This continues at the rear, which has a simple lower apron contrasted by slim taillights that flow down the corners of the E. There’s also a creased section on the tailgate links the clusters, just above the Geometry script, while the roof spoiler has a slight protrusion for the third brake light – not seen on the Kungfu Cow.

The E, like the Kungfu Cow, are not built on entirely new platforms, but are instead based on the existing B-segment Geely Vision X3 that has been around since 2017. One key difference, beyond the looks, is the E is powered by a single electric motor at the front rated at 81 PS (80 hp or 60 kW), good for a top speed of 121 km/h. The Kungfu Cow’s electric motor serves up a more substantial 95 PS (94 hp or 70 kW) and 180 Nm of torque.

The report says the Geometry E will make its public debut next month at the Beijing Motor Show before going on sale in China soon after.