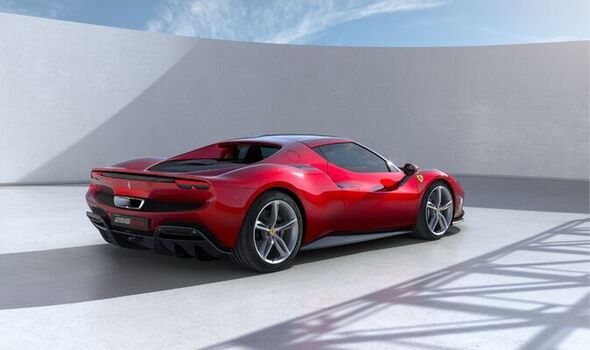 The £241,550 supercar features Ferrari’s first ever production V6 engine, which is supported by a battery-powered electric motor, producing 819bhp and propelling the car to 205mph. And 0-60mph is achieved in a staggering 2.9 seconds.

Initial reviews of the car yesterday showed that the legendary Italian manufacturer has surpassed itself with the 296.

Top Gear wrote: “A huge accomplishment. A successor to the legendary Dino. A genius bit of technical development.

“A warning shot across McLaren’s bows. Proof downsizing can improve the breed.

“Evidence that Ferrari has fully got its head around hybrid and electricity.”

EVO were similarly effusive, saying that the new model “redefines what a supercar is” and Car Magazine said: “Oozing power, poise and panache from every pore, this Ferrari challenges and satisfies all six senses.

It continued: “…the finest Ferrari sports car in years. Define finest? Accessible high performance, mind-blowing dynamics and style crammed with real substance. Truly the 296 GTB has it all.”

Pistonheads took the 296 GTB to the Monteblanco circuit in Southern Spain and was astonished by the car.

John Howell wrote: “How can a car of such remarkable extremes marshal them in a way that is not only intoxicating, but also conquerable to a mere mortal?

“I decided it’s the very definition of man and machine working in perfect harmony instead of fighting each other for supremacy. In that respect, it is a modern wonder.”

One indication of the modern motoring world is that the new Ferrari is more than capable of operating silently on its electric power alone.

In fact the car can achieve a speed of 84mph without needing the powerful petrol engine at all.

The usual battery range is lower than most normal cars however at just 15 miles.

Ferrari says that its plug-in hybrid system allows for instant acceleration with much fewer emissions.

The company’s first attempt at an SUV, named the Purosangue, is likely to arrive at some point next year.

Prices for the car are likely to be around £300,000 and it will also have a hybrid engine.

It means almost all supercar manufacturers have joined in making 4×4 models.

Lamborghini already has the Urus and Aston Martin recently updated their DBX Suv, which has surpassed sales expectations.

They sold 11,155 cars worldwide despite many manufacturers suffering amid shortages and production issues.

“We recorded double-digit growth across all main financial indicators exceeding our guidance.”