As 2020 begins to draw towards a close, Summer has reappeared to help start the countdown to 2021 in Forza Horizon 4. Series 30 is now officially underway, with new content heading to the festival following the launch of Super7 community challenges.

An underrated Fiat sports car arrives in Horizon, along with a new set of Playlist prizes for 50% and 80% completion. Let’s jump in to check out Summer’s content. 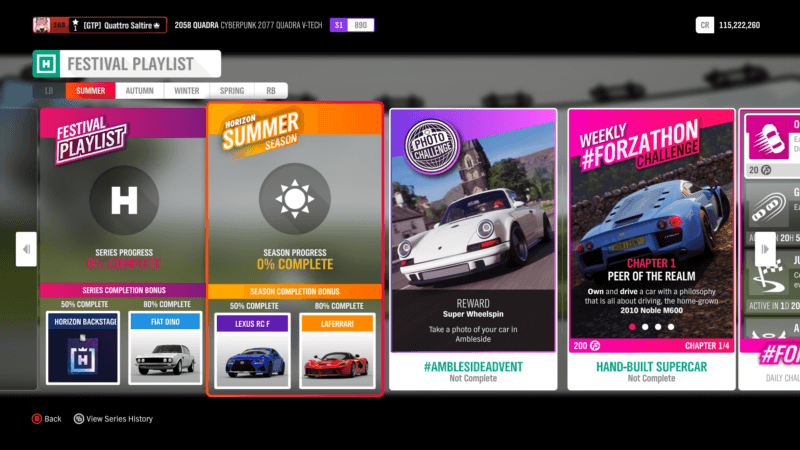 Returning content makes up the bulk of Playlist prizes this week. Kicking things off is the Lexus RC-F.

In an effort to keep up with the BMW M4, the RC-F counters the Germans with raw muscle and a scintillating soundtrack. The 5.0-liter V8 from the IS-F has been boosted to 471hp which should give the M4 a run for its money.

On the more exotic scale is the Ferrari LaFerrari. The third member of the hyper-hybrid “Holy Trinity” crushes its rivals in the numbers game. A 6.3-liter V12 and electric motor produce a combined 950hp. With all that power going to the rear wheels, you’ll need to be on top of your game to get the best out of this stallion.

This week’s main prize is the little Fiat X1/9. The wedge-shaped sports car is often forgotten about among the Italian breed. Fiat’s main aim with the X1/9 was to bring lightweight performance at a reasonable prize. Behind the drive sits a 1.3-liter engine with just 67hp. However, a weight of just over 2,200lb means that the Fiat is keen to be thrashed everywhere.

The Fiat can be yours by winning the “Abarth On The Hearth” championship.

Series 30′ first Photo Challenge will see you traveling down to Ambleside. #AmblesideAdvent asks you to snap any car you have at your chosen location in the town.

Summer events and prizes can be found below:

Abarth On The Hearth

The Knight Before Christmas 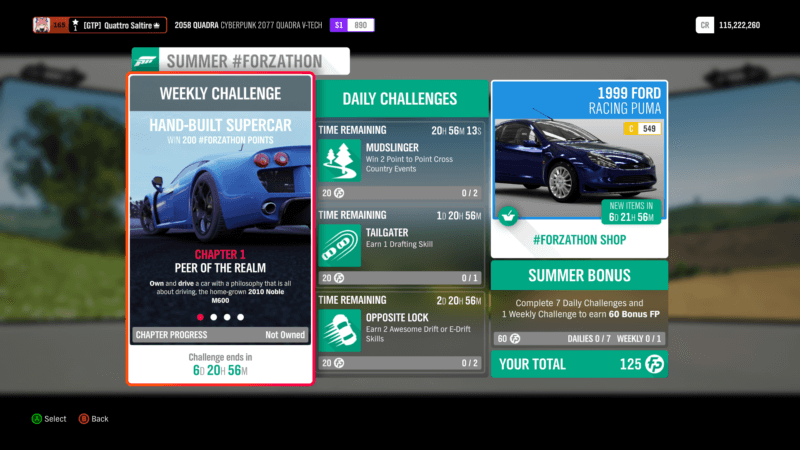 This week’s Forzathon puts the spotlight on a British supercar with an old-school punch: the Noble M600. Climb aboard to get started.

Next, get to know the Noble by going on a 10-mile drive around the UK. With 650hp on tap, that distance will fly by. Afterwards, tame that power by earning a total of 15 stars from PR stunts.

Finally, unleash that Yamaha-tuned V8 and attempt to reach 225mph to bring this week to a close. 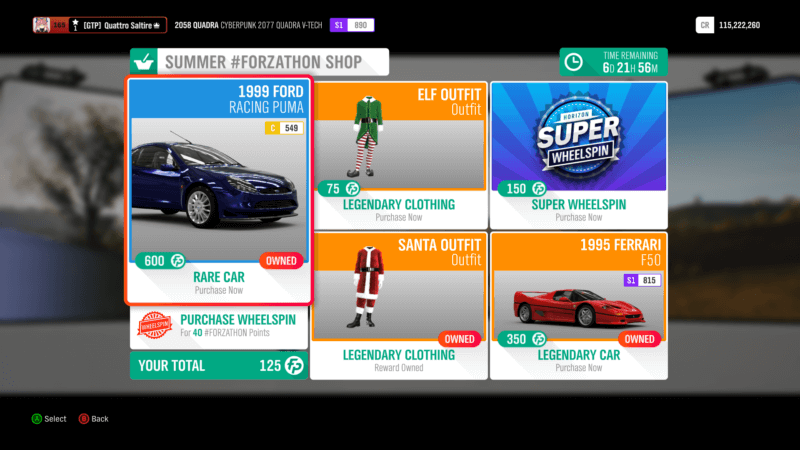 Legends are on the menu for the shop this week. Taking center stage is the 1999 Ford Racing Puma.

One of the most adored cars of the early 2000s, the Puma was built as a rally homologation model that only reached 500 units of an intended production run of 1000. Under the subtly tweaked styling is an ordinary sounding 1.7-liter engine, and with just 153hp to play with, it’s far from the most potent small coupe. However the Puma makes up for it by demanding to be driven at maximum attack all the time, where it truly shines on twisting roads.

At 600 Forzathon Points, you’ll be paying a hefty price for the Puma, but you’ll be getting a UK cult classic in return.

Joining it is the 1995 Ferrari F50. With its predecessor, the F40, billed as one of the greatest supercars ever, the F50 was always going to have a tough job, but it does raise the game over its predecessor in some ways. The 4.7-liter V12 can trace its roots to the Ferrari 641 Formula One car. With 513hp and a top speed of over 200mph, the F50 was the fastest open-top car on sale.

At 350 FP, the F50 comes rather cheap. If you find the F40 too popular, then the F50 should be more than satisfactory.

To celebrate the Christmas season, clothing items up for grabs include the Elf Outfit and the Santa Outfit.