It may come as something of a surprise, but Forza Horizon 4 is nearly two years old. The open-world racer, set in a lightly massaged version of the United Kingdom, arrived on October 2, 2018 — or September 28 for Ultimate Edition buyers — and to mark the occasion Playground Games is holding a competition.

The concept behind the competition is a pretty simple one: design FH4‘s official birthday livery. All you have to do is head into the game’s livery editor and get creative. There’s a single limitation, in that the livery you design must be for a car available in the base game — so no liveries for paid DLC vehicles — but that’s about it.

Once you’ve got your design ready, all you need to do is post it to the official Forza Horizon 4 social media channels, on Twitter or on Facebook. You’ll need to provide your Xbox Gamertag, the in-game share code for your design, and, of course, some pictures. The PG team will then choose a winner, and their car will become featured in the game as the official two-year anniversary livery, available to all users.

There’s no indication of exactly what Playground Games is looking for in a winning livery, so it’s really up to you how you approach it. However you go about it though, you’ve got until October 2 — the game’s actual second birthday — to create and submit your entry. 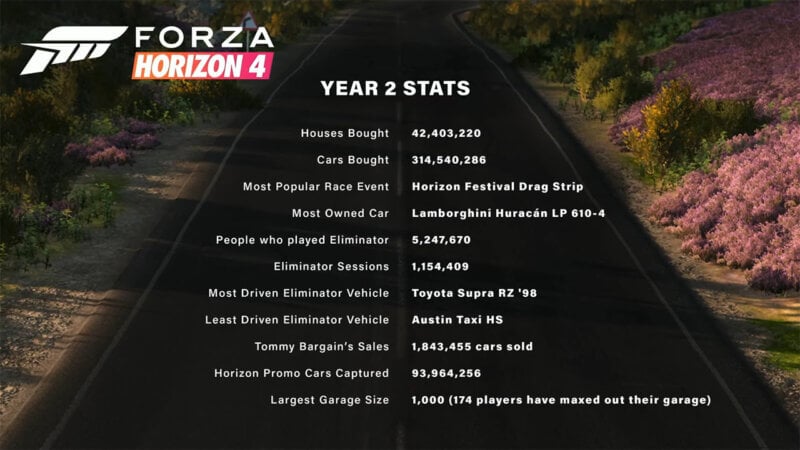 In addition, PG has shared some fun stats for FH4, to show exactly what players have been up to during the game’s life. For example, FH4‘s players have bought some 42 million houses in the game (impressive, as the UK’s Office for National Statistics reckons there’s only 27 million houses in the whole country), along with 314 million cars — which outstrips the UK’s total car parc by a full order of magnitude. FH4‘s roads are significantly busier than the real ones…

Despite only arriving at the end of 2019, 5.2 million players have got involved in the Eliminator game mode, or 18,000 players each day. The most popular car in the Eliminator is the Toyota Supra which arrived right alongside it.

One particularly odd stat is that 174 players have maxed out their 1,000-car capacity in-game garage. Given that this has only been possible for 27 days, with the garage cap lifted at the end of August from the old 750-car figure, that means almost 200 players have been very busy in the car market this past month.