The exciting world of automotive spy photos is never an exact science. Sometimes the images are straightforward, catching thinly-disguised prototypes of future models from which we can reach some obvious conclusions. Then there are photos like these, featuring a current-generation Mustang Shelby GT350 crowned with the mother of all hood bulges.

Clearly this is a test mule. Considering how many videos we’ve seen of Mustangs crashing into crowds at car shows, witty readers might see this as some kind of bizarre protection device. We promise that wasn’t our first take, and besides, it would be useless with the gaping grille still inhaling coffee-filled humans standing too close to the road. 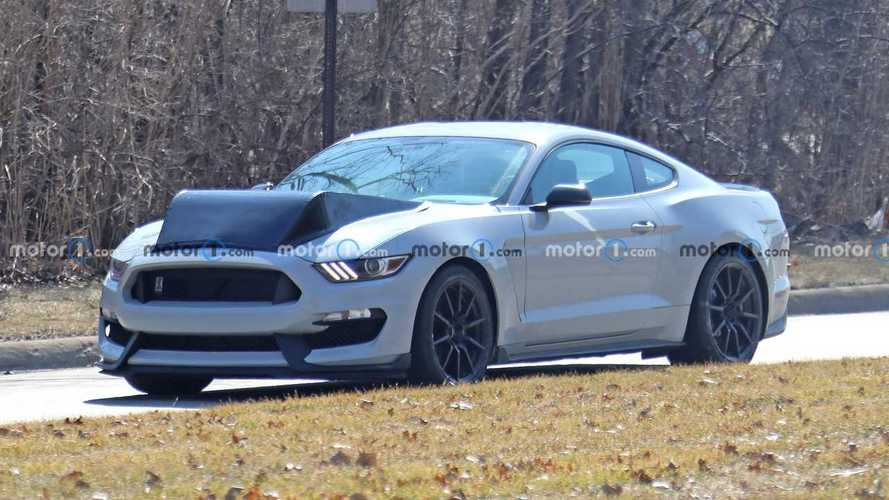 Okay, time to get serious because there are some legitimate theories to discuss. For starters, our spy crew recalls a similar setup several years ago, seen on a previous-generation Mustang test car. When all was said and done, it was hiding the significantly domed hood used on Mustang Cobra Jet race cars. As a refresher, Cobra Jets are purpose-built for drag racing and are not street legal.

That’s a very likely scenario in this case, especially since we’ve already seen prototypes of the next-generation Ford Mustang on the street. We’ve also confirmed that V8 power will return, and a new run of Cobra Jets could certainly be in the cards for the forthcoming pony. Perhaps a bigger question at this point is whether this car is merely testing a meaty hood, or if there’s a meaty engine underneath?

Our spy sources for the video didn’t mention an overabundance of sound from this test car, and everything else appears to be standard-issue Shelby GT350. The 5.0-liter V8 should return for production cars, but there’s also a distinct possibility that Ford’s 7.3-liter pushrod V8 could wind up under the hood. A prominent member of the Canadian Auto Workers union mentioned a 6.8-liter version would be used in the Mustang, though Ford never confirmed the statement.

A big pushrod engine, be it in a special production model or a track-only Cobra Jet, could be a grand sendoff to internal combustion power in Ford’s enduring pony car. With electrification on the horizon, the next-generation Mustang could be the last to feature a gasoline engine. And this Shelby could be testing it right now.