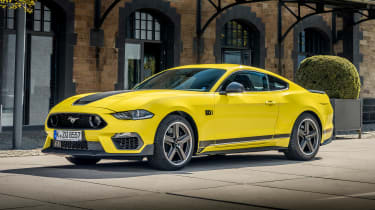 Ford has confirmed plans to bring the extreme Mustang Mach 1 to Europe, offering improved handling on the iconic sports car and, for the first time in the region, the option of a six-speed manual gearbox.

The limited-edition Mach 1 made its European debut at the Goodwood SpeedWeek, in front of a virtual audience. It uses a recalibrated version of the Mustang’s 5.0-litre V8, producing 454bhp and featuring the open-air induction system previously restricted to the US market-only Mustang Shelby GT350. Peak power is delivered at 7,500rpm, while peak torque of 529Nm kicks in at 4,600rpm.

The Mach 1 also gets an auxiliary engine oil cooler – again shared with the GT350 – that’s designed to ensure more consistent performance under heavy loads, such as track use. There’s an Active Valve Performance Exhaust system too, with four 4.5-inch tips to ensure a typical V8 note. 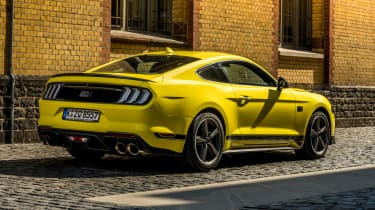 A Tremec six-speed transmission is fitted as standard – the first time a production Mustang has been offered to European customers with a conventional stick shift. A retuned version of Ford’s 10-speed automatic gearbox will be available as an option and regardless of which transmission the customer chooses, the Mach 1 gets additional rear-axle cooling and a limited-slip differential as standard.

The Mach 1 also features aerodynamic changes, including a new two-piece upper grille, a new front splitter and a rear diffuser; these all contribute to a 22 per cent gain in downforce compared with a regular Mustang GT.  The car gets bespoke suspension tuning too, including stiffer front springs and anti-roll bars, along with subframes from the Shelby GT350 and GT500.

There’s no word yet on pricing for the Mustang Mach 1 – but expect Ford to start taking orders for it in early 2021, with first deliveries in the spring. Company sources have confirmed that it will be made available to UK customers in right-hand drive, in line with the current Mustang range.

Click here for our review of the Ford Mustang Bullitt…