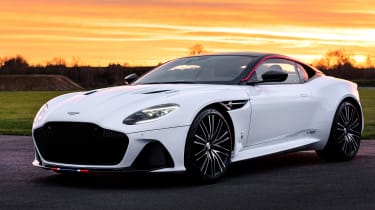 Aston Martin has revealed the first DBS Superleggera Concorde Edition – a unique version of the British brand’s flagship GT car, designed to mark the golden anniversary of Concorde’s first flight. Production of the special edition model will be limited to just 10 units.

The DBS Superleggera Concorde was commissioned by Aston Martin’s dealership in Bristol, which is little more than a stone-throw away from Aerospace Bristol at Flinton – the final resting place of the last airbourne Concorde. The museum was also once the location at which the British Concorde was manufactured.

As you would expect, the DBS Concorde features a host of styling revisions inspired by the supersonic airliner; it’s finished in the same colour as the passenger jet’s, while its roof, front splitter and rear diffuser bear the same British Airways livery. The paint scheme is complemented by a carbon fibre roof and a bespoke side strake milled from solid aluminium.

The limited edition model also features a silhouette of Concorde on its roof and a chromed version of the famous British Airways “Speedmarque” emblem on its front wings. The car’s side-skirts also wear the same Civil Aviation Authority aircraft identifier number as Concorde G-BOAC, which was the flagship of the British Concorde fleet until 31 October 2003.

Inside, the DBS Superleggera Concorde features a Mach Meter graphic embroidered on the driver’s sun visor, a bespoke Alcantara headlining with a “sonic boom” graphic, new paddle shifters made from recycled titanium from Concorde’s compressor blades and a pair of unique seats, printed with the Concorde logo and British Airways strake. 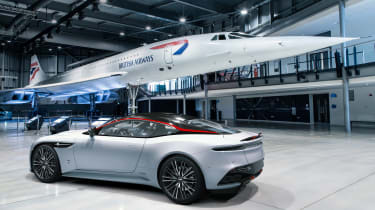 Aston Martin has also hidden a host of “easter eggs” around the DBS’s cabin, with Concorde emblems etched into the car’s paddle shifters, speaker surrounds, rear armrest and map-holder. Buyers also get a fresh pair of side steps, printed with the same logo and aircraft identification number as the exterior.

Like the standard Aston Martin DBS Superleggera, the Concorde Edition is powered by a twin-turbocharged 5.2-litre V12 engine, which produces 715bhp and 900Nm of torque. The engine sends its power to the rear wheels via an eight-speed automatic transmission, and offers a 0–62mph time of 3.4 seconds and a top speed of 211mph.

What do you make of the Aston Martin DBS Superleggera Concorde? Let us know in the comments section below…