Tesla Model 3 was #1 in August, while Ford Kuga PHEV has become the #1 PHEV in Europe.

August 2020 was another spectacular month for plug-in electric car sales in Europe as nearly 97,500 new passenger plug-ins were registered, 171% more than a year ago.

The volume was slightly lower than in the record July, but the market share improved to 11%, which means that more than 1 in 10 new cars sold is some kind of plug-in.

After eight months, nearly 612,000 plug-ins were sold in Europe. The average market share is 8.4% and grows.

The most popular models

Since the Renault ZOE results weakened in August (to 6,183), the improving Tesla Model 3 has become the best selling plug-in for the month with 7,020 registrations. Those two models are racing for first place for the year and ZOE is on the lead (52,150 VS 41,047).

The third best for the month was the Ford Kuga PHEV (Ford Escape PHEV in the U.S.) with 5,055 copies.

While the Volkswagen e-Golf is third YTD (24,489), an interesting thing happened below, as the Mitsubishi Outlander PHEV fell from #4 to #7, overtaken by Hyundai Kona Electric, Audi e-tron and Ford Kuga PHEV in a single month. Soon, those three EVs might also beat e-Golf, which is going to retire after the Volkswagen ID.3 ramp-up.

In the case of the Ford Kuga PHEV, we must note that now it’s the top-selling plug-in hybrid model in Europe. 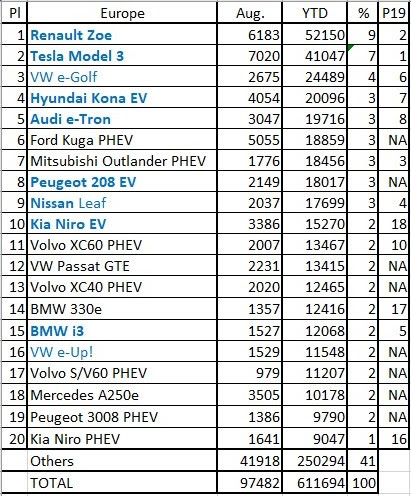