The late-1960s was the golden age of the muscle car from Detroit, and the Mustang was one of its brightest stars. At that time, anything branded with the “Cobra” designation went hand in hand with big cubes and horsepower, but by the mid-1970s, the best that Ford could do to keep the name alive was to slap it on the fangless Mustang II King Cobra. With the introduction of the Fox-body platform in 1979, the neutered Cobra name continued as little more than a trim package that was available with either a turbocharged 2.3L four-cylinder, or a 5.0L V-8.

Over the years, John Maguire has managed to take all the best attributes of the Fox-body platform and elevate the lowly 1979 Cobra.

Engine
The current engine in the Cobra is a Ford Racing 347Z crate engine that John installed as delivered. It comes with a Boss four-bolt main block fitted with 9.7:1 forged pistons, forged rods, and a forged crankshaft. The heads are Ford Racing aluminum Z cylinder heads with 2.02-inch intake, and 1.60-inch exhaust valves. On the top end it comes with a single-plane Victor Jr. intake manifold. With headers, and a 650-cfm Holley carburetor, it produces 450 hp at 6,000 rpm. 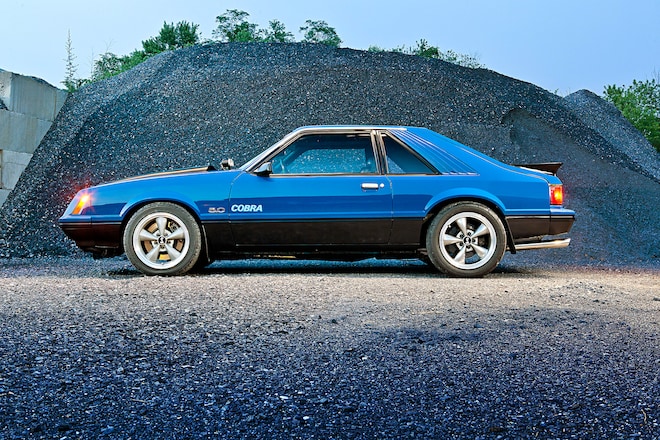 Induction
The induction system on the car consists of a FiTech Go EFI 8 Power Adder Plus 1,200hp fuel-injection system and a ProCharger P-1SC-1 supercharger with an air-to-air intercooler. This combination has bumped the horsepower at the rear wheels to 532 hp at 6,500 rpm with 8 pounds of boost.

Electronics
Engine management on the Cobra consists of an MSD 6AL box and an MSD billet distributor. This combination is part of the crate engine package.

Gearbox
John relied on a T-5 gearbox for many years. When he dropped the crate engine in, it also included a swap to a Tremec T56 six-speed with a McLeod RST hydraulic clutch.

Rearend
The current rear in the Cobra is a Ford 9-inch with a Truetrac 4.11:1 posi unit.

Paint/Body
John’s car came painted in bright blue and matte black. After a botched paintjob, it was again resprayed in its original color combination. The doors on the car, which are set up for power windows and locks are from a 1990 Mustang. At the rear, the car wears an extremely rare Ford Performance adjustable rear spoiler, while at the front an LMR fiberglass cowl induction hood replaced the original steel unit. Recently added is a reproduction Cobra decals and hood stripe from Phoenix Graphics.

Interior
When it rolled off the assembly line, the original color of the interior was blue. In 1996 John had an opportunity to buy a black one from a 1991 to replace the existing blue one. He also sourced front seats from a 1993. As part of the rebuild, front and rear seats have been reskinned in 2003 SVT Cobra Sport Seat upholstery in a black and tan suede and vinyl combination from TMI Products.