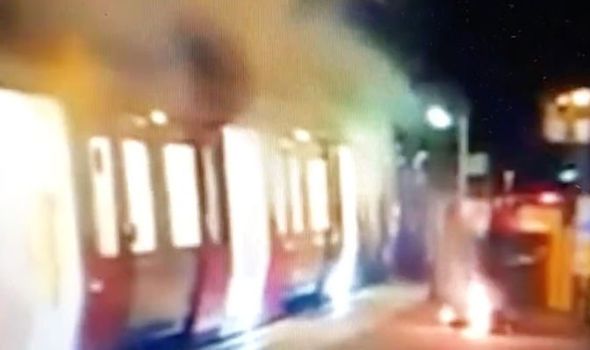 The electric scooter was seen alight on the platform next to a District Line train at Parsons Green London Underground station after a battery failure. Smoke can be seen billowing from the scooter, filling up the carriages with thick black smoke in seconds.

In a separate clip, passengers can be seen coughing and spluttering on the platform moments after leaving the train

One passenger even calls for a fire extinguisher in the hope of putting out the blaze.

The incident has sparked fury from Trade Union bosses who are demanding for change.

The TSSA, the union for people working in transport and travel, said e-scooters posed a “significant threat” to the public and staff.

Ms Ward has also called for “a further ban” to be considered across the “wider travel network” for safety.

She said: “Without doubt, the incident at Parsons Green raises very serious concerns.

“It’s becoming all too clear that e-scooters pose a significant threat to the traveling public, our members and all workers at TfL.

“There should be an immediate halt to transporting them on all TfL services until more research into these batteries has been carried out.

“I’m therefore urging TfL to fully enforce the already existing ban on the use of e-scooters.

“Indeed, a further ban across the wider travel network should be considered by the Secretary of State for Transport.

“What happened at Parsons Green and recently at Stanmore must be properly investigated as soon as possible.