Drivers could be charged for simply driving through puddles if water is pushed onto the path and into other people. In most circumstances, road users are likely to be issued with a £100 fixed penalty notice and three points on their driving licence.

However, motorists could be slapped with penalties for driving without reasonable consideration for other persons.

Maximum punishments will be issued if officers consider the act to have amounted to “clear incompetence, selfishness, impatience or aggressiveness”.

According to the RAC, splashing road users would also violate section three of the Road Traffic Act 1988.

However, road users could also find they accidentally soak pedestrians during bouts of heavy rainfall if they drive too close to the kerb. 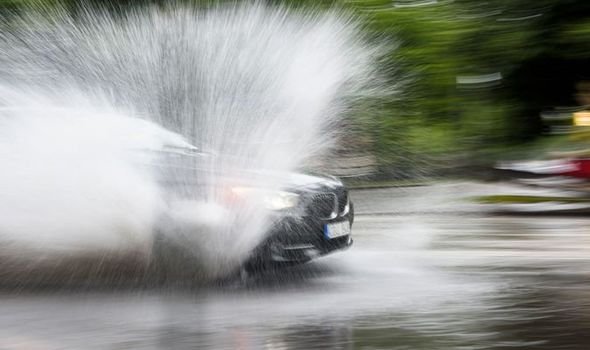 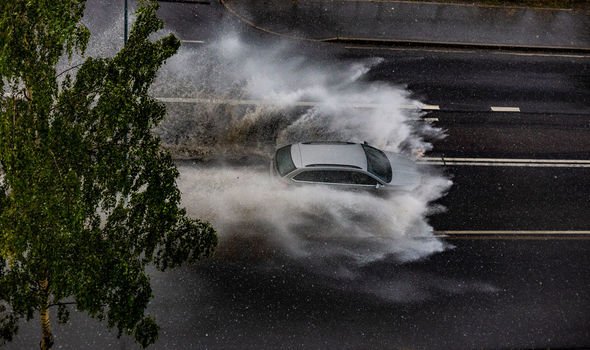 Penalties are awarded at the discretion of the police so those who accidentally committed an offence may still be charged.

RAC spokesman Pete Williams said: “Anyone unfortunate enough to have suffered a drenching by an inconsiderate motorist splashing them when driving through a puddle would probably welcome a sizeable financial penalty for the driver.

“Since 2013 careless driving can be dealt with by a Fixed Penalty Notice with a £100 fine and three penalty points.

“If, however, they refuse [the notice] then they will face a magistrate who could impose a fine up to £5,000, although the maximum is very unlikely.”

DON’T MISS
Thousands admit to not slowing down in the wet [INSIGHT]
You could be fined if you don’t prepare your car for winter  [ANALYSIS]
Weather warning: Britons urged to check car before leaving home [COMMENT]

He said: “ If you are caught out or need to drive, be prepared to pull over if it starts to become hazardous and wait for it to be safe.

“Do not drive into a flood, and if you can, avoid driving directly through puddles.”

Experts have warned that driving through puddles is also a dangerous safety risk which could see some drivers caught out.

Driving through heavy water can cause your tyres to lose their contact with the road surface which could cause your car to slide or aquaplane.

Drivers will find it hard to control the car in this state which could see them but other road users or even pedestrians which could cause serious injuries.

Mr Greening has urged drivers to “take it slow” when travelling in wet weather to avoid losing control of the vehicle.

“If you have to drive, allow more time so you can take it slow and pause your journey if you get caught in a bad patch. 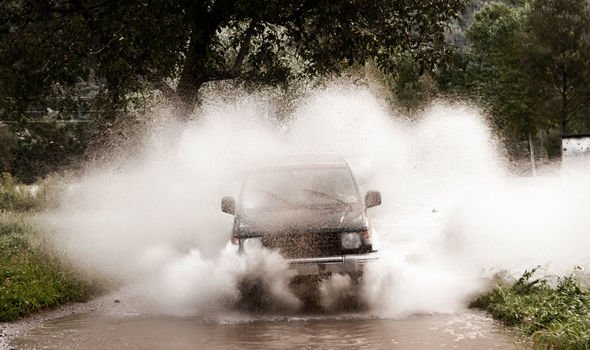 “Always keep both hands on the wheel and slow down to maintain control of the car.

“Winds and rain can be so persistent they can cause your car to drift or veer with no warning.”

Police have taken action against offenders on various occasions highlighting this is taken seriously by officers.

In 2014 a 22-year-old was banned from the road and fined after soaking a woman and a child as they walked out of school.

Police also issued an appeal after a mother and her children were splashed by a 20ft puddle in early 2018.