I may not adore DeWalt power tools as much as Guides and Gear’s Executive Editor Jonathon Klein does his precious Milwaukee impact wrench named after Thor’s hammer, Mjölnir, but they have only been good to me. My black and yellow drill and angle grinder have taken more abuse than they signed up for and are still trucking. Regardless, DeWalt isn’t the first name to come to mind when tool sets are discussed.

DeWalt is now a part of the Stanley Black and Decker family, so it makes sense that they offer tool sets. This is a brand that’s been making tools for nearly a century, and there’s probably a lot to like DeWalt’s tool set. But since they’re coming from a company known for power tools, not hand tools, there’s also the chance that its ratchet and socket collections are lemons. 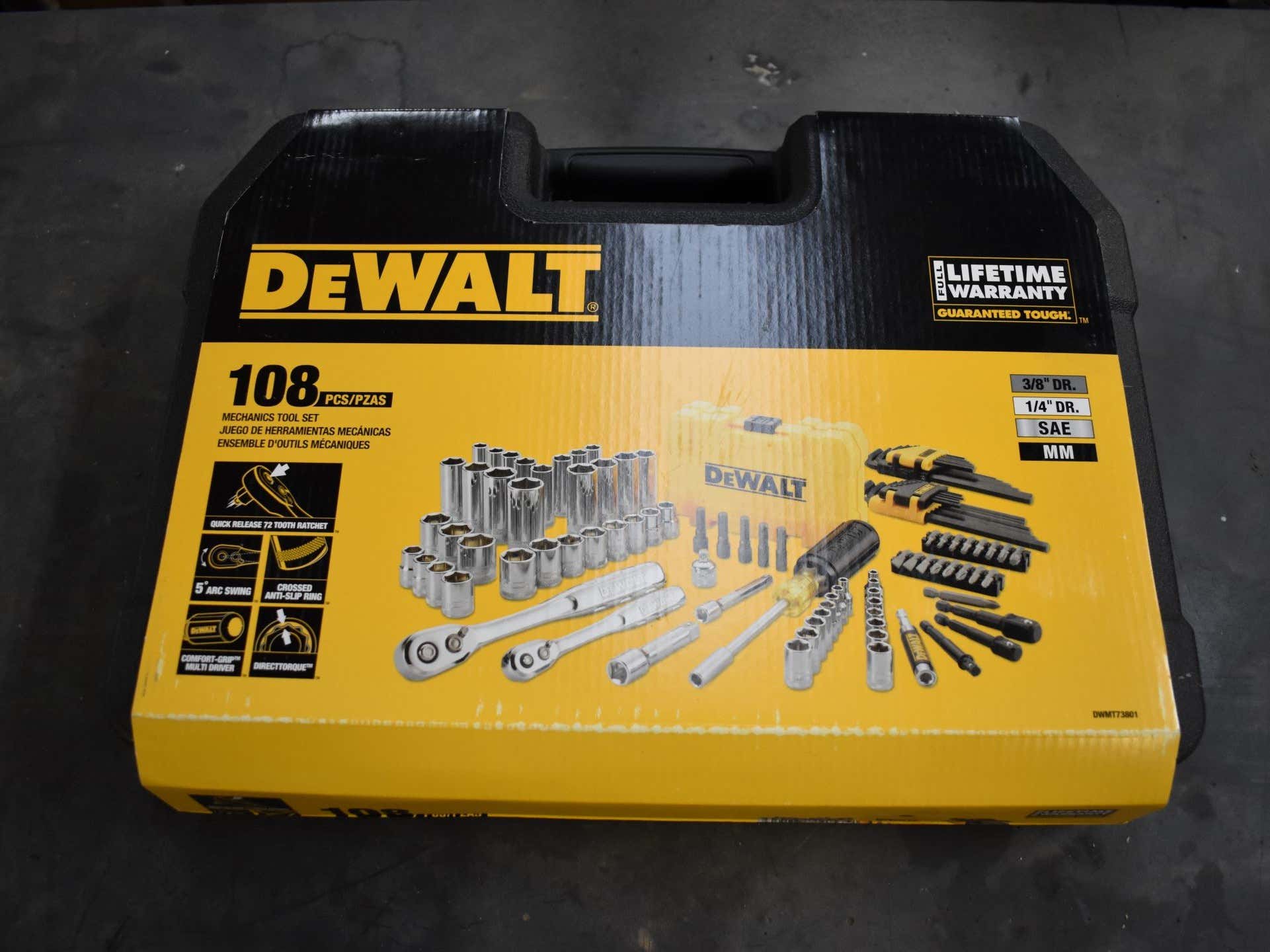 Regardless of what your gut tells you, the DeWalt 108-piece Mechanic’s Tool Set deserves a shot. That’s why The Drive tested it. We’re ran this bad boy through its paces to find out how it ranks with the rest of DeWalt’s lineup.

I was expecting with this set a rehash of the other Stanley Black and Decker tools I’ve recently put my hands on. Not that they were bad, I just didn’t expect DeWalt to change much other than the name on the case. As it turns out, DeWalt came out swinging. 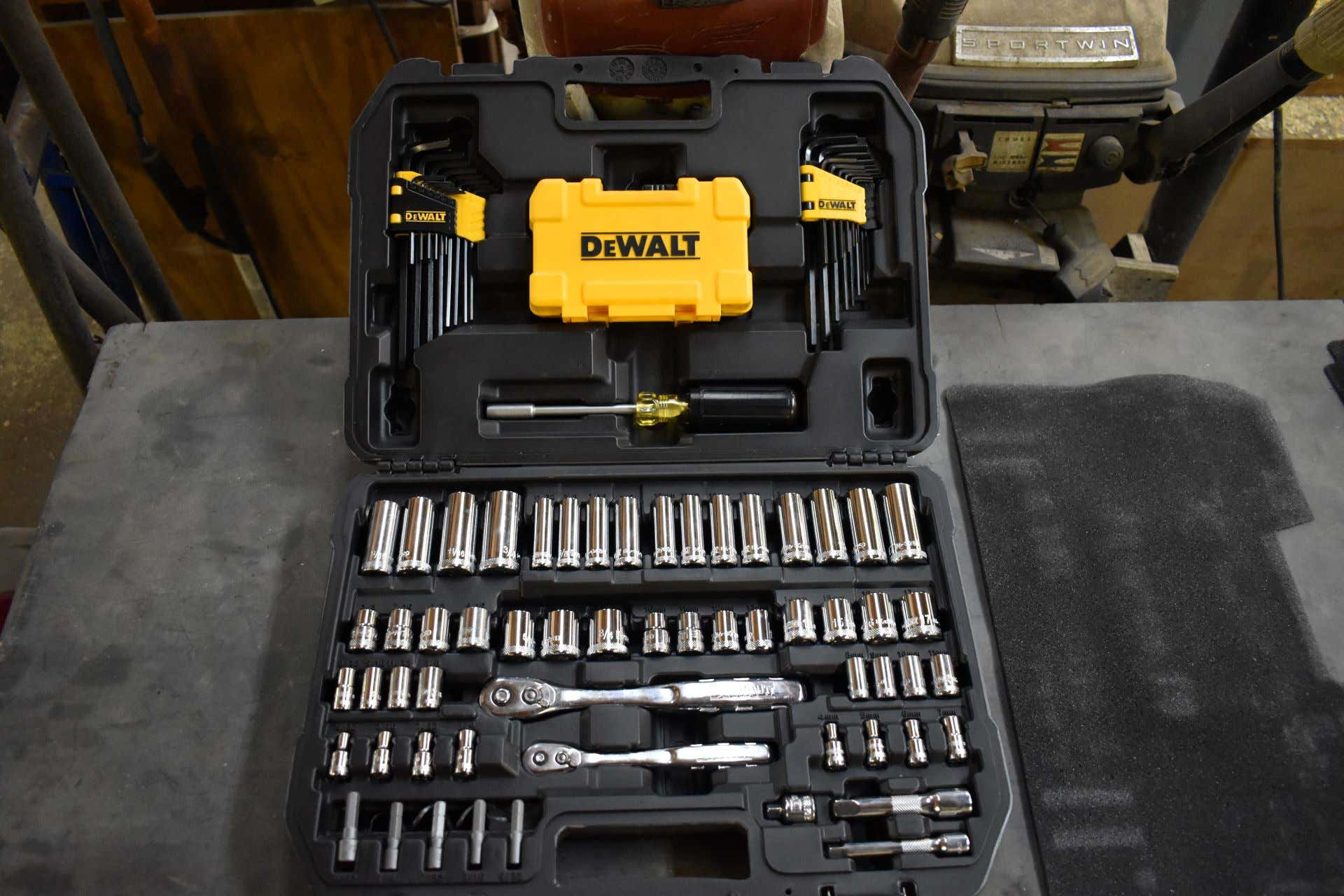 As you can see, DeWalt sets you up with a pretty good collection of sockets and tools. Though, the inclusion of a spark plug socket would be ideal.

The case has little to do with tool performance, but DeWalt’s packaging is a cut above the others. Its blow-molded case vastly outshines the Stanley case, and it’s better than what Craftsman ships out. There are no manufacturing defects, and each piece is well contained. DeWalt’s case also comes with metal latches, an upgrade from the plastic clamps that typically hold toolboxes together.

Good first impressions don’t end with the plastic bits. Every socket, extension, and adapter features knurling and legible sizing engraved in them — no sketchy laser etching here. The bit driver is much better than most, and the bits come in their own dedicated wells. Even the Allen key selection is somewhat impressive, featuring jointed sleeves.

The ratchets may feature the Stanley Black and Decker standard 72-tooth drive, but they aren’t just Craftsman or Stanley units sold as DeWalt. While the handles are reminiscent of the new, sleek Craftsman design, the heads are much smaller. I believed that the slim profile might compromise integrity, but these can squeeze into those places the others would struggle to reach. That said, I had the perfect job in mind for this tool set.

Getting After It With the DeWalt Mechanic’s Tool Set

My 1969 Dodge Charger is again the guinea pig for this tool review. Although it doesn’t have too many tight spaces, aligning the doors makes me tremble at the mercy of my claustrophobia.

I wouldn’t be taking my fenders off or dropping the dash for this task, even though that would normally begin the door-alignment process. It’s not just because I’m lazy. I wanted to see if the slim profile and high-tooth count of these ratchets would work without removing those parts. There’s little room to deal with the bolts tucked up behind the dash on the driver’s side. And I’ve always been limited to combination wrenches on the doors because most of my ratchets only cause grief there.

Even if my body lines are only slightly less jacked up — that’s why you do things the right way — I have to tip my hat to the DeWalt ratchets. They slipped into every crevice with ease, that tight swing arc helped me get out of those awkward positions quickly, and the tools felt great in my hand. 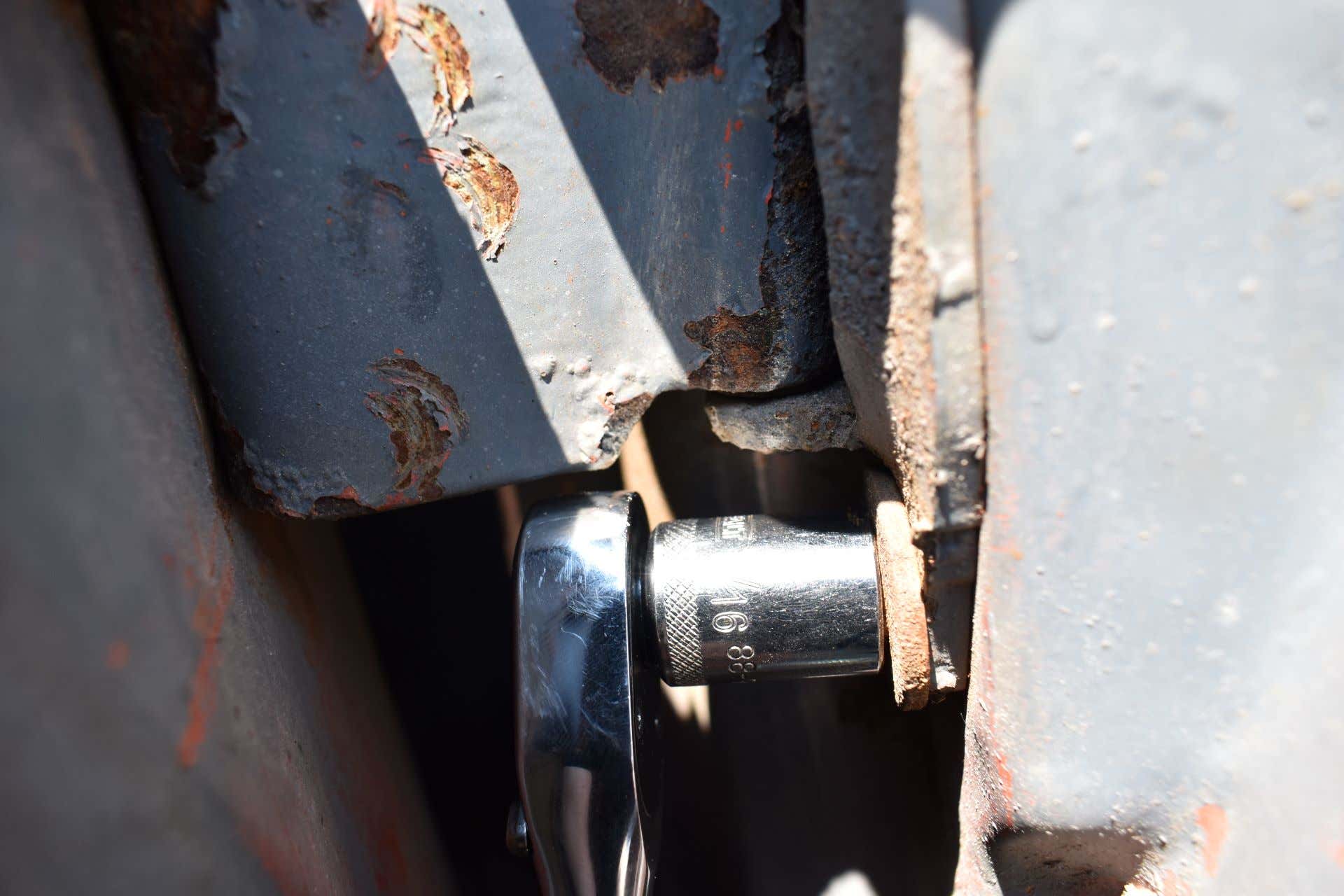 As you can see, the small head has its advantages. This might not be the tightest space, but I couldn’t get any shots of those extremely tight, extremely rusty spaces.

I used a significant amount of pressure when I tightened down the hinges in order to test the limits of the internals. I’m not Hercules, but I didn’t expect these ratchets to be able to withstand much abuse before failing since they’re so small. They didn’t fail. The sockets did well. No matter how screwed up the geometry was, they didn’t slip off any bolts and send my knuckles into any sharp edges.

I put the nut driver to the test on the strikers and doorsill protectors attached with Phillips screws. Like the ratchet, it was a joy to use, and I had no real issues with performance. The robust yet cushy grip feels good in the hand, it has a positive lock on the bits, and I didn’t have any issues with the bits camming out or deforming, even when I took a chance on the size-2 Phillips bit on size-3 screws. I did move to another screwdriver after that test, but I didn’t wreck any hardware.

As I said, I know what’s inside these ratchets. We dive into the internals to see what we’ve got to work with and if it’s up to our standards. I assumed that these are rocking the same guts as the other Stanley Black and Decker ratchets we’ve dissected, and they do. Even if my confidence in these ratchets is growing, I don’t have much faith in the design. I’ll explain why a little later. 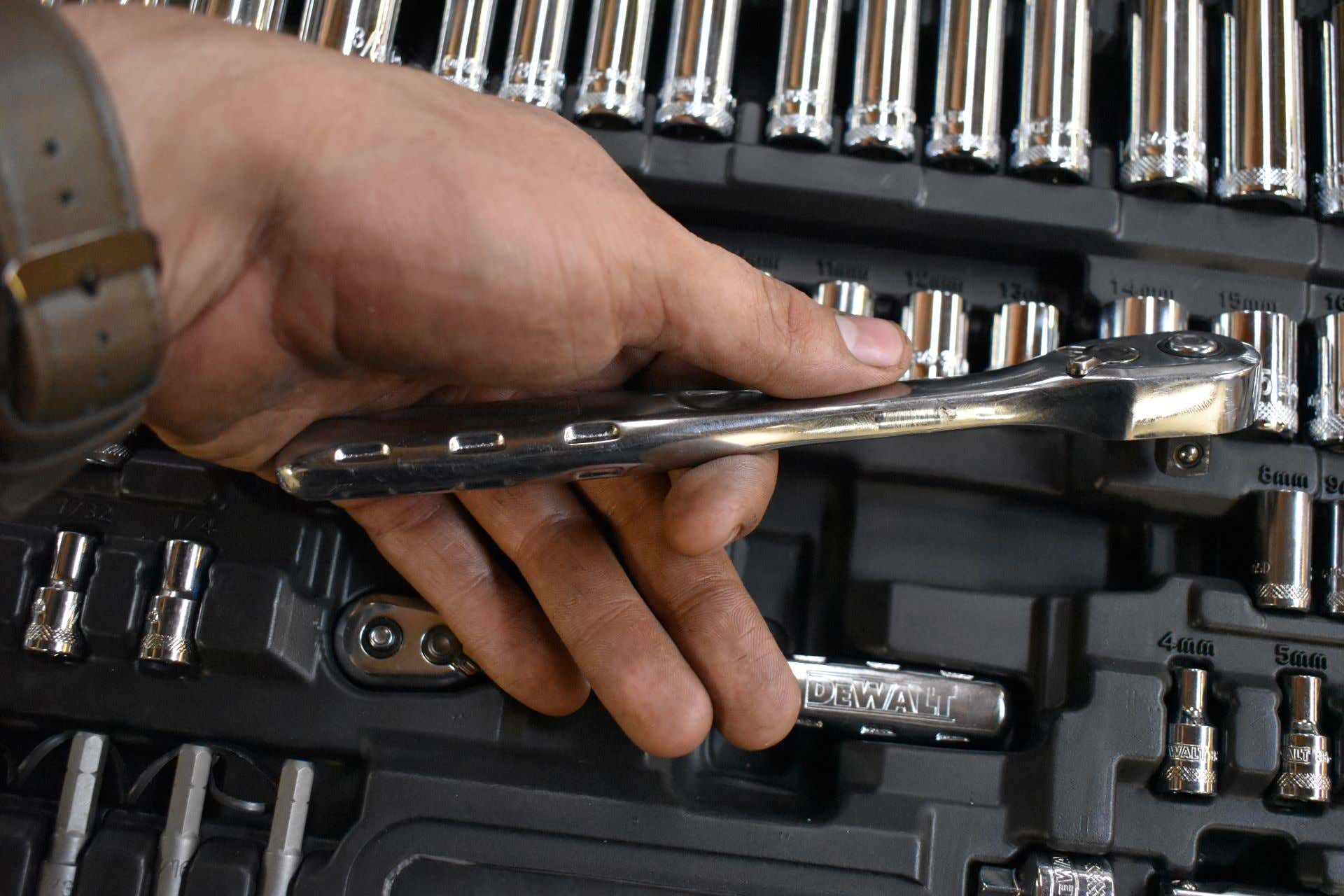 I’m entirely on board with the flat handle DeWalt has to offer. To me, this feels far more natural than the traditional round handles ratchets typically feature.

This isn’t the first set of Stanley Black and Decker tools I put to work, so I knew a little bit about how the tools handle. Still, DeWalt impressed the heck out of me.

I love that most toolmakers are designing ratchets with smooth edges that make the tools enjoyable to use. I just wish more companies would copy DeWalt and Craftsman and move away from round handles. I know the rectangular-like tools aren’t as easy on the eyes, but the grip is far more enjoyable. 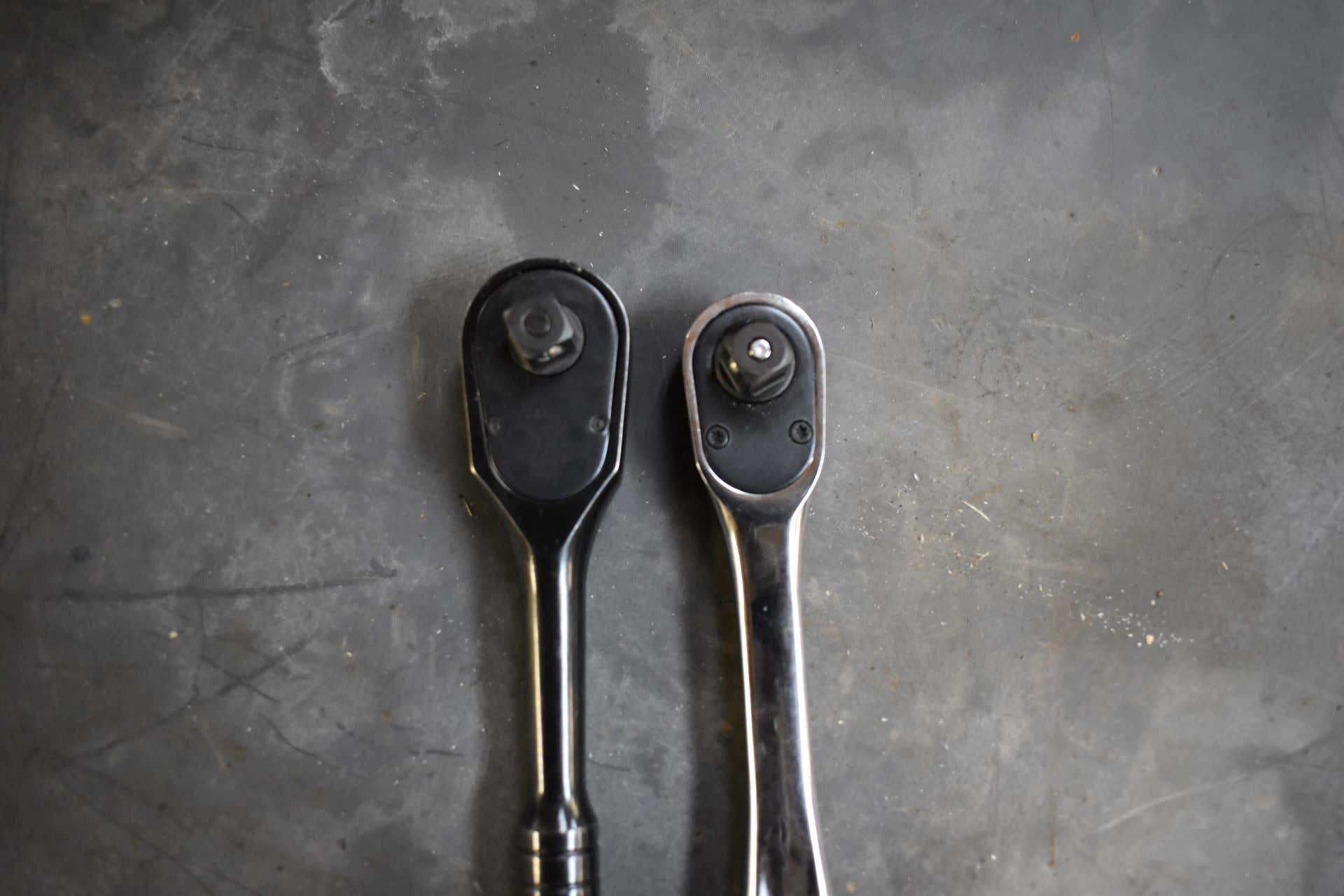 As you can see, the DeWalt ratchet is much smaller than Stanley’s black chrome ratchet.

The compact head is my favorite detail of this entire set. It makes a major difference when space is limited. I also admire the quick-release function. Typically, the button on the rear of the ratchet adds to the thickness of the head’s profile, and it’s easy to accidentally engage. The button on these ratchets is very small, so it’s not as much of a hazard.

As great as the ratchets are, the entire kit lives up to the DeWalt name. The quality of the sockets, bit-driver collection, and all other parts add a lot of value to the tool set. This kit also includes nearly double the tools that kits of a similar quality offer, making this one of the best budget-friendly kits out there.

What’s Not Good About DeWalt’s Ratchet and Socket Set

I’ve taken a stance against Stanley and Craftsman for their internal mechanism, so it’s only fair to highlight what I dislike about DeWalts guts. Stanley Black and Decker is equipping many ratchets with a single-pawl design these days. Although the single pawl is superior to the twin-pawl layout in terms of durability, these particular ratchets have a major drawback. The pin that presses the pawl into the drive gear is a thin piece of metal that can easily come out of place if anything’s out of alignment. 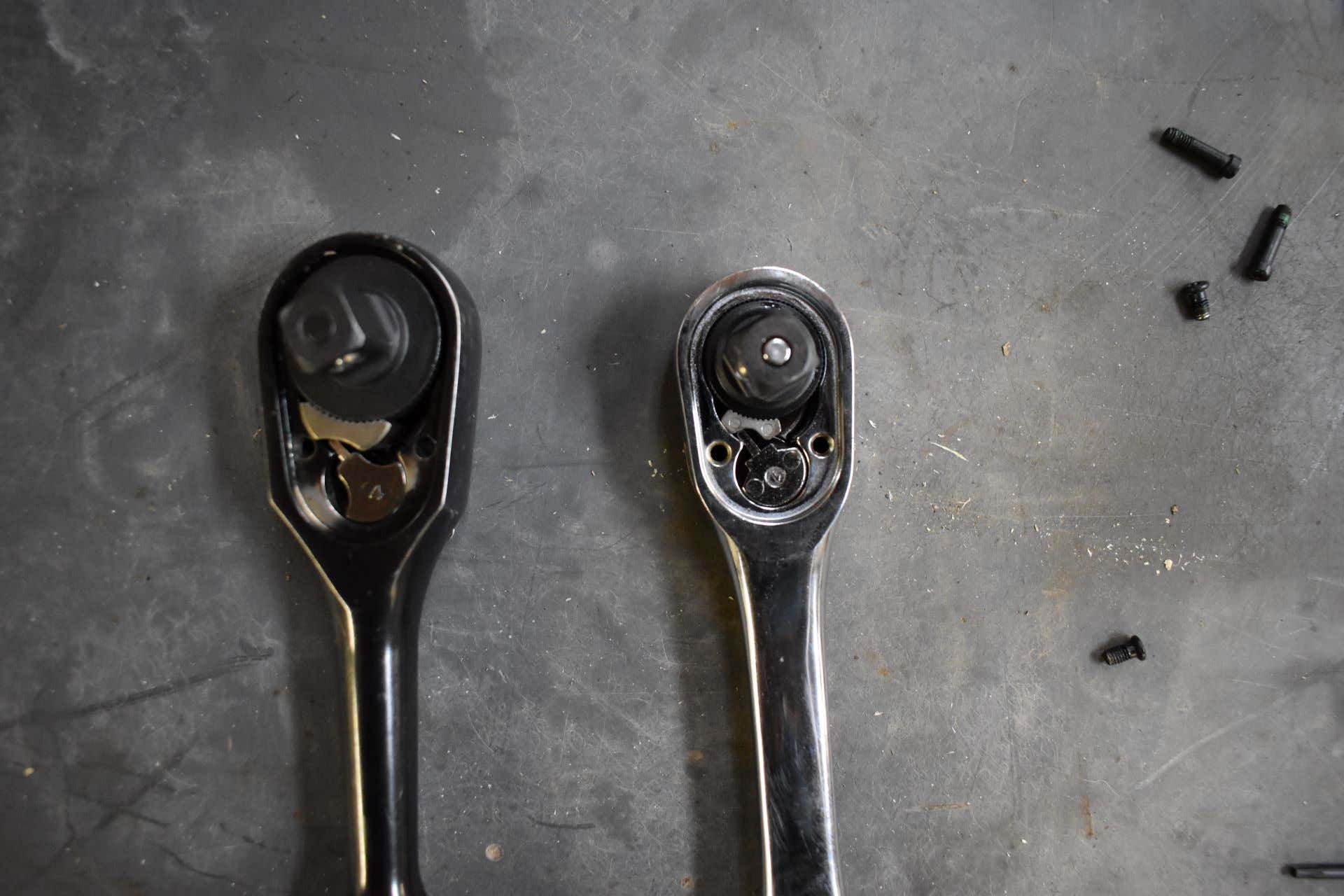 As you can see, the internals of the DeWalt are similar to Stanley’s. Though, it would appear that DeWalt’s design just might be a step up.

I have had no issues with this system, and you might have the same luck. However, I have been using tools with this setup for relatively light tasks and for only a few jobs. So, reliability and consistency over time is unknown. I’ve seen the internals of other single-pawl fine-tooth ratchets with a much beefier pin. It makes me wonder why Stanley Black and Decker doesn’t take the same approach.

There isn’t much to dislike about this set. It could benefit from the inclusion of a spark-plug socket, however. Considering everything else this set has to offer, this price is very reasonable.

You probably shouldn’t build an entire collection around this DeWalt set, mostly because other manufacturers have far more comprehensive collections of hand tools. But this is one of the better budget-friendly options out there. It’s enjoyable to use, it fits into tight spaces, they didn’t force laser etching on us, and they even threw in some knurling to make us feel all warm and fuzzy inside.

I’m still against that slim pin inside that has the potential to ruin your day, but you’re bound to take a hit somewhere when buying affordable tools. I also still have yet to see the system fail, and my confidence in it is growing. I’d like to see something a little beefier, but it is a compromise I think many can live with, considering it is such an affordable kit that does many other things well.

This is one of the better budget-friendly options out there.

You’ve got questions. The Drive has answers.

Q. Are DeWalt tools made in the United States?

A. While many of DeWalt’s power tools are manufactured in the U.S., that isn’t the case for these hand tools. As with many of the tool lines owned by Stanley Black and Decker, these are made in Taiwan.

A. I wouldn’t put DeWalt’s tools in the same league as professional tools, but I do think they’re one of the better budget-friendly options out there. This set is very similar to the new Craftsman and Stanley tools, except your dollar goes further because it includes more tools for a similar prices.

Q. What is the best DeWalt tool set?

A. The DeWalt 108-piece Mechanic’s Tool Set is great for the money, but it does lack some features. You’re better off with the DeWalt 168-piece set if you’re looking for a well-rounded collection to start with.

The Drive’s Gear section is our brand-new baby, and we want it to grow. In the interest of clarity, we want you, our dear readers, to know that the products we review are from a variety of sources, including those we purchase ourselves and those we receive from manufacturers. No matter the source, we maintain our editorial independence and will always give you our honest assessment of any product we test.

We cannot be bought — unless you wave $1 billion in our faces. Maybe then we’ll consider it.

Let’s Talk: Comment Below To Talk With The Drive’s Editors

We’re here to be expert guides in everything “how to” and product related. Use us, compliment us, yell at us. Comment below, and let’s talk, y’all. You can also shout at us on Twitter or Instagram or reach us at [email protected]