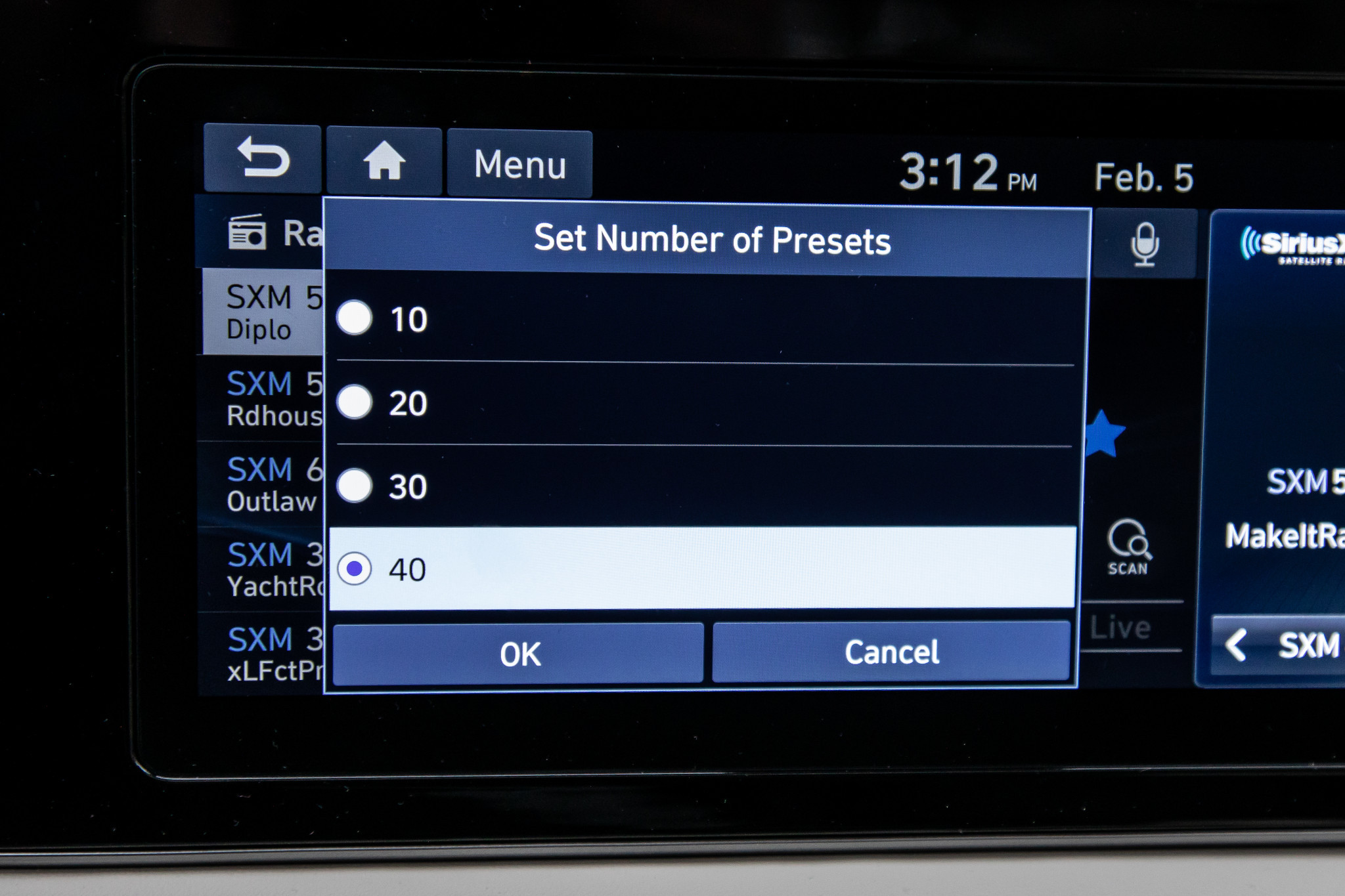 One fun thing about buying and owning our Best Of award winner each year is that we spend enough time with it to suss out the stuff you wouldn’t immediately notice just driving around for a few days. Such was the case with our 2020 Hyundai Palisade. Cars.com scribe Brian Normile leaned over our desk partition one afternoon to ask, not entirely rhetorically, “Hey, did you realize how many radio presets the Palisade has?”

Like many people, the question hadn’t occurred to me. I’m not sure I was prepared to hear 40, though.

“I ran out of even remotely legit ones at five,” Brian elaborated. “Still set 40, though.” (And, of course, he made sure to set the ambient light to violet — maybe in deference to our corporate colors, likelier in deference to Prince.)

The idea of a preset for every thief Ali Baba had to face in “One Thousand and One Nights” may seem needlessly high on a first pass. Our Palisade has seating for seven, which means even a full house guarantees at least five channels apiece if you divvy it up evenly. Or you could do six channels for six occupants and four for a less-demanding seventh. Or … you get the idea. The possibilities are virtually limitless, particularly if you live in a place like Chicago, home to Cars.com and some 9.5 million people in the metro area, as well as more than 100 terrestrial radio stations, never mind a SiriusXM subscription that adds another 150 or so.

Still, I was curious as to how Hyundai settled on the count. Spokeswoman Michele Tinson said via email that through Hyundai’s market research, “we learned that many people like having presets for HD stations and primary stations. Keep in mind, there’s the possible addition of seven subsets per station on an HD broadcast. We elected having at least 40 selectable presets provided.”

Will that number expand on future iterations of Hyundai’s multimedia system? Though the question remains open, it seems likely. Tinson noted that “as the demand and collective customer feedback changes, so will the technology incorporated into the radio.”

Hyundai isn’t the only automaker considering the future of its multimedia technology; several brands both luxury and non-luxury are in the process of unveiling updated systems. At the 2020 Chicago Auto Show, Fiat Chrysler Automobiles’ Nick Cappa told me in a run-through of the 2021 Chrysler Pacifica’s new Uconnect 5 system that it has 64 possible radio presets. Ford’s current Sync 3 system, once a game changer, has just 18 presets, but the next-generation Sync 4 due to appear on the 2021 Mach-E electric crossover may have more. Volkswagen is rolling out its next-generation MIB 3 multimedia system later in 2020 on the face-lifted Arteon as well as on the recently unveiled 2021 Audi A3. Volvo has a new Android-based Sensus system on the way, too, which will be in the XC40 Recharge — and that will replace the current Sensus, which Volvo says allows for 100 presets.

Still, as vehicles get more uniformly reliable and a consumer’s decision may increasingly come down to details like multimedia capability, the question remains: How many radio presets is too many? At what point do engineers say the technology can’t take more? What is the preset limit shoppers are willing to swipe through?

In fact, it’s more likely engineers are looking at that answer a different way. To wit, Cars.com’s Executive Editor Joe Wiesenfelder put it best when I pitched this story: “Nobody cares if you have too many presets. They care only if you have too few.” And just as it’s been with previous generations of multimedia technology, I expect the paradox of choice will continue to be a moving target both for shopper and automaker alike.