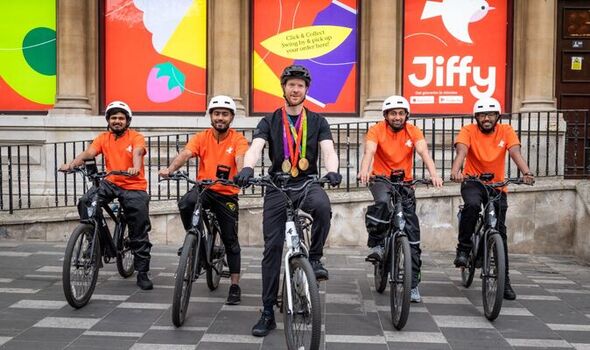 Riding on the pavement (27 percent), lack of respect for other road users (27 percent), and jumping red lights (26 percent) are the things that most annoy people about these two-wheeled travellers.

And despite more than a fifth saying these particular cyclists are what mostly cause the rage they witness, 61 percent have recently noticed more of them on the roads within a large town or city.

The research was commissioned by rapid delivery company, Jiffy, which has partnered with three times Olympic cycling champion Ed Clancy, ahead of National Bike Week, to teach rule-breaking delivery riders how to deliver goods quickly, without endangering the public.

Vladimir Kholiaznikov, co-founder of the delivery company, said: “Two in five people feel less safe on the roads than 12 months ago, and nearly half of respondents believe this is due to rapid grocery and food delivery services.

“We have taken the first step in addressing the issue – in order to improve the safety of all road users.”

As many as seven in ten don’t think delivery riders are trained to cycle safely – but despite this, more than a fifth will continue to use their services for their own shopping needs.

The issue of chaos on our streets seems to have stemmed from a “need it now” culture, as 45 percent think the ability to get things quicker than ever has led to repercussions on the road.

A third reckon they’ve become less patient over the past year when waiting for deliveries, with nearly three-quarters (73 percent) admitting we are a nation that wants and expects everything “now”.

Nearly three in ten would only wait a minimum of 45 minutes for a rapid food delivery before getting impatient.

And one in five would expect groceries to be at their door on the same day of ordering, according to the OnePoll study.

Talking about the safety course, Ed Clancy added: “It has been designed to ensure that Jiffy riders can deliver safely whilst getting people what they need in minutes, all within the rules of the new Highway Code.

“We’re making this film publicly available in the run up to National Bike Week to kick-off our training initiative to improve safety. We urge other rapid delivery services to follow Jiffy’s lead.”