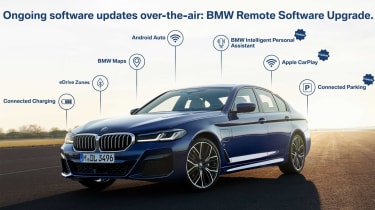 Three quarters of a million BMW drivers are set to benefit from Android Auto smartphone connectivity and a host of other new functions, after the Munich firm announced it is upgrading over 750,000 cars with its latest OS 7 infotainment software.

The upgrade will be free of charge, and BMW claims it is “the largest over-the-air update ever rolled out by a European manufacturer”. Drivers with cars that are compatible with the new operating system will receive a notification via their car or BMW smartphone app. Customers in Germany will be offered the service from 19 October, with other European markets and those elsewhere receiving the new system in stages.

By installing its latest operating system BMW will plug a hole in cars with earlier software. These models had Apple iPhone users well served thanks to Apple CarPlay integration, but left drivers with Android devices without the ability to mirror their phone’s screen on the car’s infotainment display due to Android Auto not being available.

OS 7 was introduced with the latest BMW X5 in 2018, and owners of BMWs that are able to receive the update will find that in addition to Android Auto and the new operating system, their cars will also have:

The free update is in stark contrast to the last time BMW made headlines with choices around software provision. The car maker faced criticism last year after it quietly made Apple CarPlay a subscription service that drivers would have to pay for on an annual basis. The firm subsequently rowed back on this decision, however.

Over-the-air (OTA) updates offer huge opportunities for manufacturers to upgrade – or downgrade – their vehicles remotely. Tesla’s OTA updates have seen owners of Model 3s, Ss and Xs wake up to find their cars have been equipped with new features overnight, while Jaguar Land Rover has also made big promises about the technology.

OTA updates don’t only promise advantages to consumers, however. In theory, buyers of second-hand cars could find some features disabled if the original owner’s contract specified some services were not transferable between owners, for example. Conversely, owners who might want to test out a new feature before deciding to buy it, or drivers who want to rent a particular function for a short period of time, could benefit from OTA updates.

Looking to buy a new car in 2021? Here are the best cars coming out next year…