The six-figure market has never had more utilitarian options than it offers today. There have always been a few choices for those going off-road in style, but as overlanding becomes more in vogue and dirt trails beckon to the wealthy few, new, more capable, ever-more-expensive trucks pop up by the week. And the newest entry to the high-end, hard-core off-roading market is this Chevrolet Silverado-based prerunner, the Blacklake XT1.

Blacklake Research and Development is an entirely new competitor in the independent tuning space. While the company is still in its infancy – the two trucks pictured in this story are the only two Blacklake products in existence – its founders have years of experience working at Detroit OEMs. So they’ve aimed high both metaphorically and literally for their first product, with this Chevy-based monster. 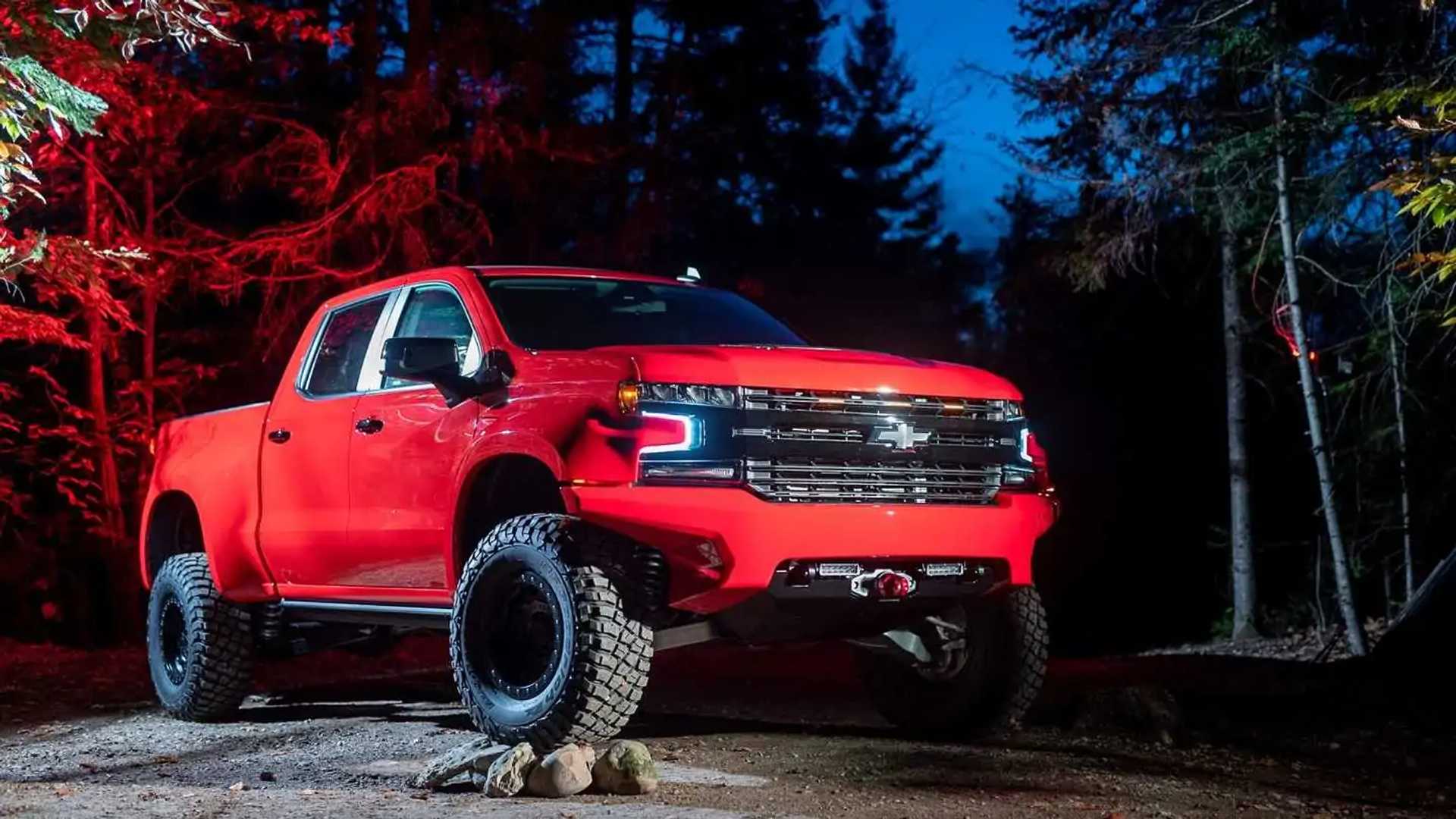 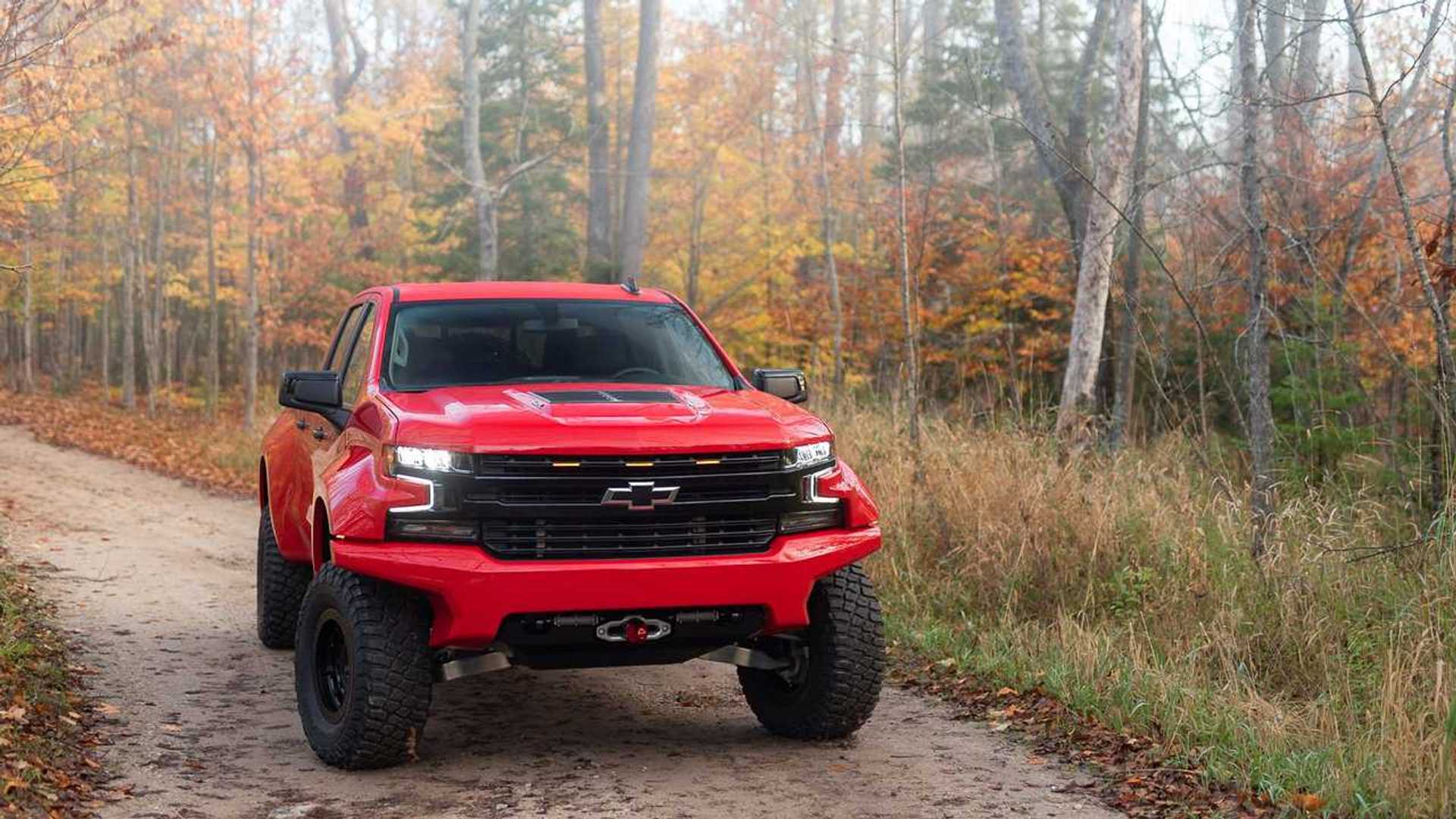 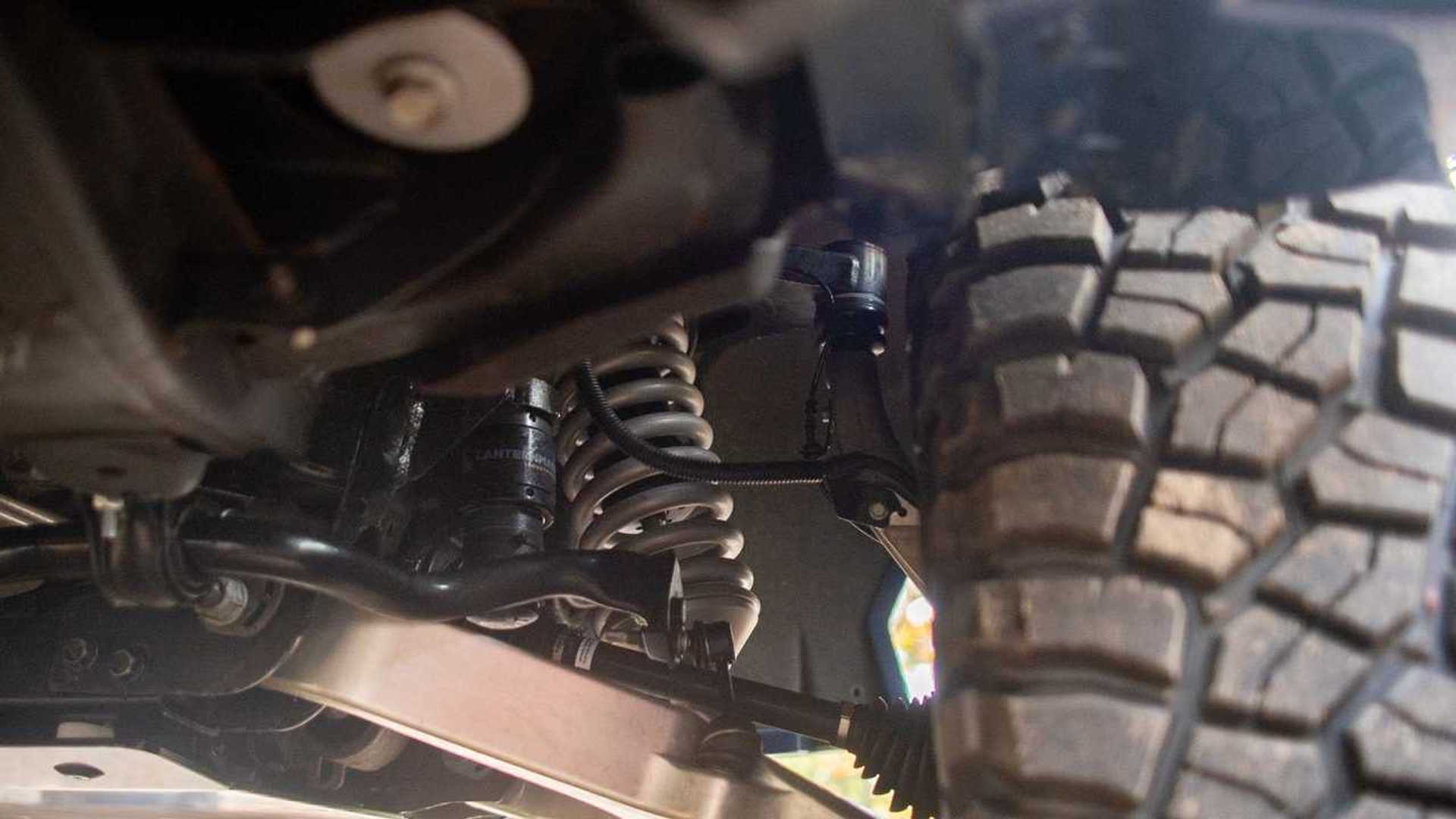 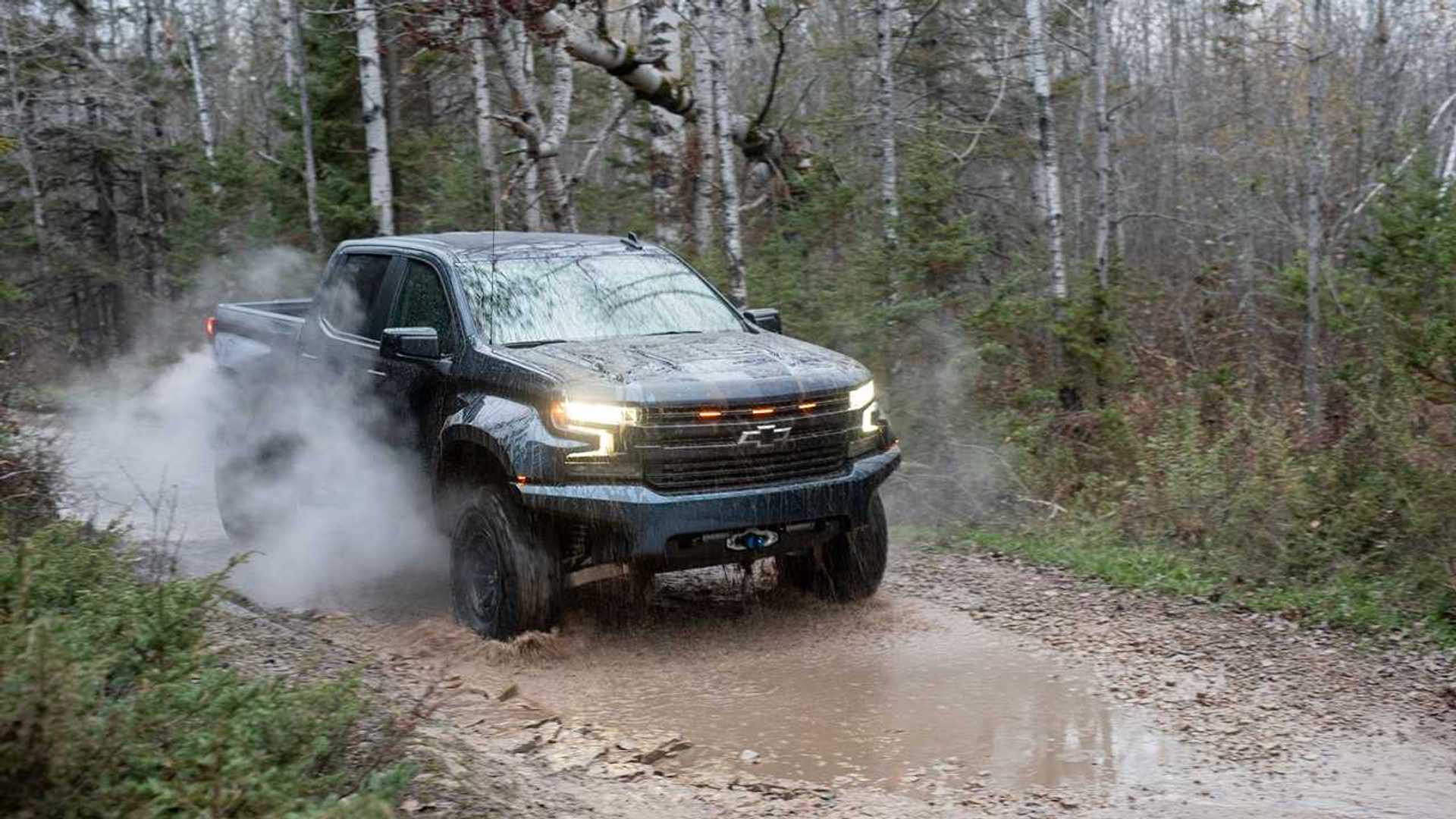 The XT1 is built on the current-generation Silverado Trail Boss, but the spec sheet promises a driving experience unlike anything the Bowtie offers from the factory. JRI coilovers, billet control arms, and 11.5 inches of travel up front; head around back, and an electronically locking 3.73 rear diff supported with a custom-made five-link setup promises a staggering 17.5 inches of travel. Lanternmark jounce shocks support the truck at all four corners, so even when all that travel is finally exhausted, there’s still a soft landing for the driver.

Under the hood, a Magnuson supercharger helps the Silverado’s 6.2-liter V8 deliver over 600 horsepower channelled through the stock 10-speed automatic transmission. To tie it all together and help establish that Blacklake’s first creation is no regular Silverado, an in-house designed carbon-kevlar widebody kit exclusive to the XT1 ensconces a set of Black Rhino 17-inch beadlock-capable wheels, wrapped in 35-inch tires. Blacklake redesigned the bumpers to match the wider body and improve approach and departure angles, with a Warn winch neatly nestled into the front fascia.

The XT1 is built on the current-generation Silverado Trail Boss, but the spec sheet promises a driving experience unlike anything the Bowtie offers from the factory.

The benchmark Blacklake is shooting for is clear from the company’s very first press release: The XT1 promises to end the “reign of the dinosaurs,” an obvious allusion to the Ford Raptor and Ram TRX. Without Chevy or GMC offering a real competitor in the prerunner space, the XT1 is a compelling proposition and, at least on paper, is more capable than either OEM offering, with more suspension travel in the rear, theoretically more robust suspension components, and more aggressive wheels.

There’s one snag, though. Whereas the other Detroit dune-runners start in medium-high five-figure territory, the XT1’s MSRP will be solidly in the quarter-million-dollar range. Even if you have $250,000 to burn on a new prerunner, production numbers are expected to stay below 150 trucks per year, so if the XT1 will end the reign of the dinos, it’s going to do that for a very select few.

This ultra-high price point and exclusive focus immediately piqued my interest as I headed to drive the XT1 on the remote Drummond Island, just east of Michigan’s Upper Peninsula. The Raptor and TRX are no slouches; for any company to claim it can outdo two of the Big Three’s in-house off-roaders raised my eyebrows.

At first glance, the XT1 does show it’s serious about being in the conversation with the TRX and Raptor. The widebody kit looks comically angry, like it knows it has something to prove, but regardless of aesthetic preferences the fit and finish of the XT1 is on par with an OEM project. The most compelling and heavily engineered components of the truck – the billet control arms and JRI-developed coilovers the whole package rides on – are all blatantly showcased by the custom front and rear bumpers and make it immediately obvious to any would-be bystanders on the trails or at the valet that this is no ordinary Chevrolet.

Step inside the crew-cab, though, and prepare for disappointment. There are two modifications from the stock Chevrolet Silverado interior: a small, outdated, and cheap-feeling touchscreen for auxiliary electronic controls (including the rear e-locker), and upgraded leather seats. The current-generation Silverado already feels disappointingly busy and cheap for its standard pricing, so sitting in the cockpit of a bespoke quarter-million-dollar truck that has essentially a stock interior is a massive letdown.

Step inside the crew-cab, though, and prepare for disappointment.

If Blacklake wanted to offer comfort, a GMC would be an improvement, and if performance is the true goal, an aftermarket dash display with more information (a boost gauge, perhaps!) would be beneficial too. With the ongoing supply chain crises, Blacklake admitted that obtaining trucks and parts has been a challenge, so hopefully as the world economy gets back on track, the XT1 will become a more special place to sit than any other Silverado.

Those same supply chain issues sadly meant that the demo truck I got for the day was this blue 5.3-liter V8 LT model with a Lingenfelter supercharger strapped to it, rather than one of the 6.2-liter V8 Trail Boss-based versions Blacklake intends to sell. Power output was down by about 100 horses, from north of 600 hp to the low-to-mid 500-hp range, although the rest of the truck was theoretically identical to the eventual production models. Further changes may come down the road because this was the very first functional truck Blacklake has ever built, and is very clearly still a work in progress.

Even with the smaller V8, the supercharged 5.3 felt plenty powerful. As a bonus, the Borla-sourced exhaust sounded fantastic. But flaws began to stand out as soon as we got up to speed. Starting off on the pavement, the steering feel was exceptionally vague even by full-size truck standards. Keeping the absurdly wide pickup in its lane when driving normally required all the concentration I could summon. The rear coils use traditional noisy sleeving as well, which lead to a worse-than-OEM level of harshness in the cabin.

Flooring it and loading up the rear with acceleration-induced squat seemed to dial in the steering feel a bit on blacktop and quiet down the rear coilovers, which makes me suspect the XT1’s pavement mannerisms could be improved vastly with further tuning, but right now you’d have a more comfortable ride to the grocery store in a TRX that costs a third of the price. Still, this was forgivable – presumably, a monster truck like this is truly meant for the dirt, and blacktop was an afterthought.

Without pushing the XT1 well beyond safe limits for dirt roads, it felt unstable.

Once we finally hit the dirt, however, the lack of tuning was impossible to forgive. On Drummond Island, the majority of the trails available to us were single-lane groomed dirt, primarily meant for hunters in UTVs and Jeeps, all with low speed limits and blind corners. Without being able to really use any of the six hundred horses available, the dirt paths were a good place to see how it would handle more typical trail running to campsites and cabins.

And sadly, without pushing the XT1 well beyond safe limits for dirt roads, it felt unstable. The suspension’s overly soft tuning meant it had a decent amount of see-sawing, and without proper load at the rear, the XT1 didn’t feel steady or surefooted. But finally, a gravel pit beckoned, and with it, a safe place to really romp on the massively overbuilt suspension.

But then I hit a handful of “woops” – elevated dirt humps – at around 20 miles per hour, and while the rear suspension did a phenomenal job of absorbing them, the front just couldn’t keep up, leading to a sickening up-and-down motion as the oversoftened front coilovers tried futilely to find equilibrium. And when I kept my foot in it, getting the suspension to finally reach its fullest travel for the very first time in the day, the stress from the long-travel coilovers cracked the OEM transfer case open and split the rear differential carrier like a twig.

Blacklake did get it fixed in record time using the spare transfer case from the SEMA truck, and it added in a few quick-welded support braces on the diff carrier to try and help hold the whole thing together more firmly – a very clear demonstration of the benefits of having a company run by engineers. After it was repaired, the tests continued and the team tweaked the suspension setup, which immediately showed benefits. I watched closely from the passenger seat while the next writers took it out for a spin. It markedly improved, especially at high speeds, when the suspension was a bit stiffer.

A Long Way To Go

Unfortunately, it never quite seemed to all come together in our tests. Large bumps would still lead to cockpit see-sawing as the suspension components weren’t quite working in harmony. At lower speeds, the XT1 never felt as comfortable as vastly less expensive off-roaders, and at higher speeds it was hard to feel entirely confident after watching it so spectacularly break earlier in the day.

This isn’t to say the truck doesn’t have promise, though. The five-link rear end and JRI-designed coilovers, when finally dialed in – hopefully before the XT1’s target launch date, in quarter two of 2022 – promise to offer an incredibly high ceiling of performance off-road, potentially higher than its OEM competitors, and in the brief periods where the full supercharged power of the XT1 were usable, this truck was an absolute riot.

Overall, I left curious to see more, but far from sold on the Blacklake project. I do suspect that the heavily engineered suspension setup will only really shine at ten-tenths driving; at anything less than full tilt off-road, it felt subpar compared to its competitors. Even more concerningly for Blacklake, though, with only a touch over eleven inches of travel up front (almost three inches less than a Raptor and about two less than the TRX), it still remains to be seen if the XT1 can actually offer more in practice than the Ram or Ford trucks offer – especially for $250,000.

At lower speeds, the XT1 never felt as comfortable as vastly less expensive off-roaders, and at higher speeds it was hard to feel entirely confident after watching it so spectacularly break earlier in the day.

And the plain Chevrolet interior offers absolutely no creature comforts over other, similarly domesticated prerunners on the market. For buyers where cabin noise and plushness is an afterthought, any actual purpose-built $250,000-dollar prerunner would absolutely eat the XT1’s lunch. At the same time, it’s too spartan for TRX and Raptor shoppers to tolerate the price tag.

All of these concerns may be addressed in the final product, however, as the team seemed excited to work on the next revision of the XT1 and were receptive to my critiques. Growing pains of this sort are natural for a company as small and fresh as Blacklake, and if it can come from this experience with a better product, I’ll be excited to give it a harder, more thorough test.