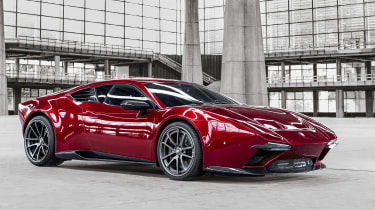 Italian coachbuilding firm ARES design has officially unveiled its first custom supercar – the Panther ProgettoUno. Production will be limited to just 21 units, with each bearing a price tag of €515,000 (roughly £465,000) when it arrives this summer.

The Panther ProgettoUno is based on the same chassis as the Lamborghini Huracan – but its styling is inspired by the De Tomaso Pantera. ARES has fitted a new carbon fibre body with a similarly sharp nose, wedge-shaped profile and pop-up headlamps.

Like the Pantera, the Panther also has a slatted engine cover and an aggressive rear diffuser, which houses an enormous upswept quad-exit exhaust system. Finally, to give its custom supercar the same broad stance as its spiritual grandfather, ARES Design has fitted a set of wider rear wheels and fatter tyres. 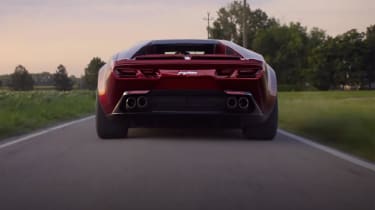 It’s powered by a fettled version of the Huracan’s naturally aspirated 5.2-litre V10 engine, which has been fitted with a new stainless steel exhaust system and a reflashed ECU. Output has increased to 641bhp and 600Nm of torque – which is 10bhp more than the range-topping Huracan Performante.

The engine is mated to the same seven-speed dual-clutch gearbox and four-wheel-drive system as the Huracan and, to keep the engine’s performance in check, there’s a set of Brembo carbon ceramic brakes with six-piston calipers.

ARES Design was founded by ex-Lotus CEO Danny Bahar in 2015. The brand is based in Modena, Italy, and since its launch, it has designed and built modified versions of existing luxury cars, providing unique takes on the Rolls-Royce Wraith and Bentley Mulsanne.

Hungry for more performance car news? Check out our list of the best hypercars on sale in the UK now…