Brazil’s Adriano Carrazza has won the Americas Regional Final in the 2020 FIA Gran Turismo Online Championship, taking the win in a three-way tie after the three races.

Carrazza, Angel Inostroza, and Andrew Brooks all racked up 38 points from the day’s races, and were only separated on the basis of their result in the final event of the day: a 25-lap endurance race at Sardegna Road Track A.

It was Chile’s Nicolas Rubilar who set the early pace, taking a pretty straightforward win at the Interlagos circuit in Gr.3 race cars. Having qualified on pole position — as is typical for Rubilar — he pulled out a 3.5-second advantage by the time the checkered flag dropped. That was somewhat aided by Brooks who, fighting with his Viper, was able to keep both Inostroza and Bonelli behind throughout the race.

Coming onto the last lap, Bonelli tried to make his move on Brooks, but ended up sufficiently out of position that Inostroza and then, in quick succession, Carrazza and Randall Haywood managed to slip past before the end.

2018 World Champion Igor Fraga meanwhile was having a tough time. Fraga managed to qualify in 7th in the Mazda Atenza, and finished in the same position despite the fracas directly ahead. 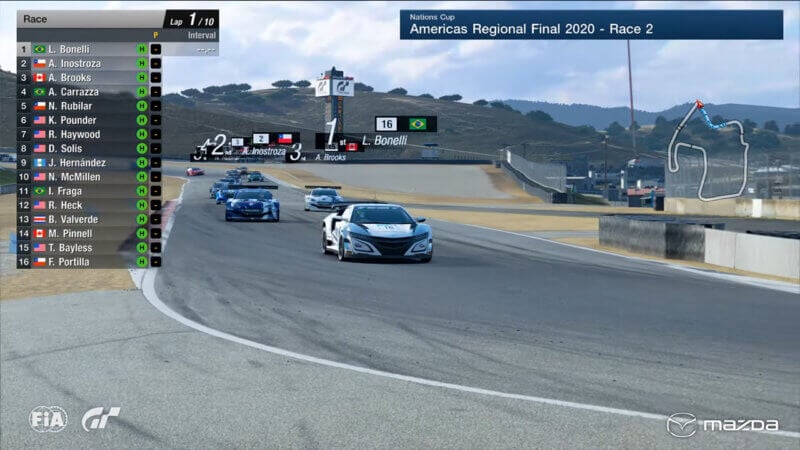 As is often the case, the Gr.B cars proved a little more dramatic. Bonelli scored the pole position, ahead of Inostroza, and for much of the race that appeared to be how they’d finish too. However a turn six incident on lap eight changed the result entirely.

After closing right up onto Bonelli, Inostroza appear not to take account of the Brazilian’s braking point for the corner and drove into the back of him. That sent Bonelli into the gravel and the loss of momentum for Inostroza was enough to allow a lurking Brooks to slip into the lead. With a two-second penalty slapped onto Inostroza too, Brooks was able to coast to the win.

The penalty wasn’t enough to swap Bonelli back past Inostroza, but the duo rounded out the podium, ahead of Carrazza. Despite Rubilar finishing well down the order, he was still able to hold onto third place in the points table, setting up a probable five-way scrap for the four World Finals positions. 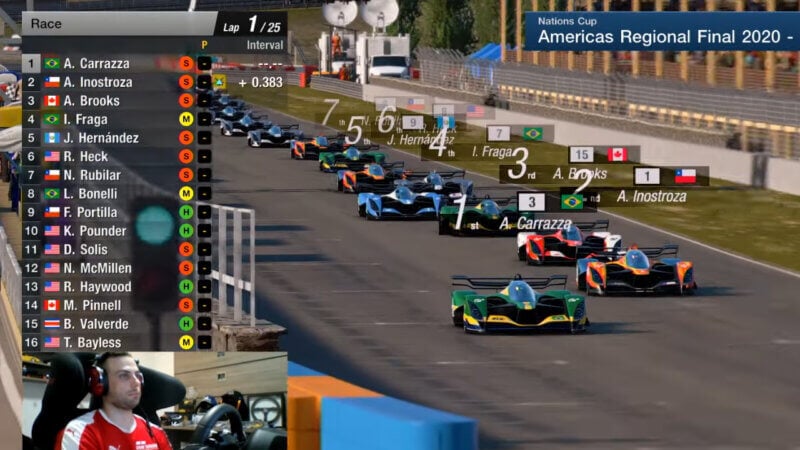 Despite Rubilar’s legendary qualifying form, the Chilean could only place seventh in the X2019s, with Carrazza taking pole ahead of Inostroza and Brooks. Sitting in fourth was Fraga, who’d not had the greatest of events thus far but we all know he’s supremely capable in these particular machines.

However, Fraga’s race was effectively over on lap two. The only one of the front seven running on medium tires rather than softs, the 2018 champion unwisely tried to defend from Brooks around the first sweeping chicane. This ended with Fraga in the gravel and pushed back into the clutches of Rubilar and Bonelli, which resulted in a further off-track excursion at the tight left corner we refer to as Piaggio.

The race began to settle a bit as the pit stops started, but the front three were beginning to look a little comfortable. Inostroza then made an unusual strategy call, coming into the pits three times in successive laps — running a single lap each, the minimum required, on the medium and hard tires, and then again for his second set of softs. That put him back in 13th and with two more stops than his rivals and still needing to run the medium tires.

Meanwhile, Bonelli was making a fight back. Having tripped over Fraga, and then having a solo accident two corners later, early in the race, he’d been back in 11th. However he’d managed to get past Haywood and Bayless to get up into fourth. Debut driver Juan Hernandez had quietly sneaked up into third but some way distant from Carrazza and Brooks up front.

With Brooks running until lap 24 before pitting for his required hard tires, and Inostroza’s earlier strange strategy call, it wasn’t clear until the closing stages how they’d finish. However the Canadian hadn’t pulled out enough of an advantage to pit and keep either Carrazza or Inostroza behind, so finished third on the road.

That created an unusual situation where the top three were tied on 38 points. The result of the final race acted as a tie-breaker, crowning Carrazza as the Americas champion, ahead of Inostroza and Brooks.

Bonelli’s remarkable recovery drive saw him finish fourth in the race, out-dragging Hernandez to the line, but that didn’t change the overall table. The Brazilian finished with an eight-point advantage over the fifth-placed driver, the USA’s Haywood, to claim his place in the World Finals next month.

The full list of Americas region qualifiers for December’s final is as follows:

There’s one more regional finals to come, with the Asia-Oceania event coming on December 6, which you’ll also be able to catch here on GTPlanet. That comes the same weekend as the races in the World Finals, though these will be broadcast at a later date.