Five roll racers reveal the appeal at Charlotte’s Big One.

Drag racing is the bedrock on which Car Craft’s foundation lies, but a new trend is emerging on drag strips: roll racing. We attended 2019 Street Car Takeover in Charlotte (June 29 – 30, 2019) to see what all the excitement is about. The activity has grown steadily over the last decade, and has its roots in larger, Southern cities with out-sized communities of performance-minded folks, but with relatively sparse outlets for legal racing.

The background of roll racing goes back at least as long a dig racing (drag racing), but didn’t get popular until the advent of YouTube and smartphones. Wanting to provide proof for their exploits, roll racers began recording and posting videos of illicit late-night racing on social media. The “roll” part evolved from street cars with drag power, but not equal levels of traction or driveline strength (and some would say talent, too—but that’s beyond our scope here). 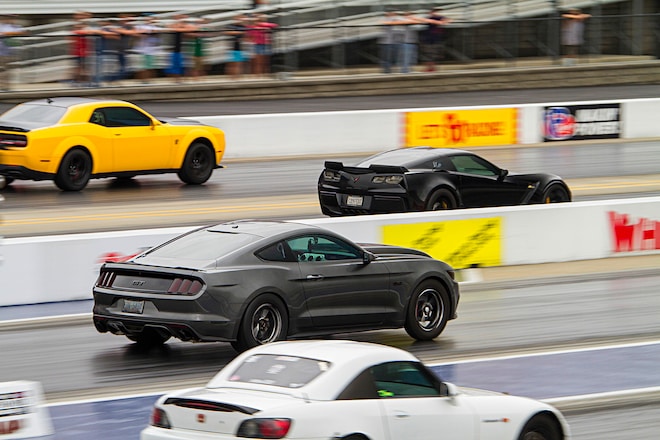 Born on the interstate highway network in and around large Southern cities, races are started at a roll—usually 40 mph. For many street cars with DOT tires, this is a sweet spot that allows drivers to start a race at the right engine speed for maximum torque, but at a speed that makes it easier to get traction. One of the cars (often a passenger) gives a three-finger count starting the race, which ends when a car hits 140 mph (or whatever is customary in the region.) It’s exhilarating, but dangerous as hell, not to mention illegal. That brings us to Charlotte’s zMax Dragway, and Street Car Takeover.

Street Car Takeover is a three-day event open to a variety of street cars with a common trait: they’re all driven fast. It was founded by two young car guys, Justin Keith (32) and Chase Lautenbach (27), who after a humble beginning in 2014, now hold events throughout the country. At Charlotte, we saw a wide variety of car makes represented, including real-deal Nissan GTR R34 Skylines, LS-swapped Fairmonts, turbocharged Vipers, and Hondas—with and without LS power plants. There are only two classes: full-tilt drag cars, and street cars.

“We want to give the 1,000hp street car guys the spotlight on a big track where they’re the main attraction,” said Justin. “They’re not secondary, and the fans are there to see them.” Street Car Takeover, the only national event which holds roll racing, reserves Friday for roll racing and Saturday for a car show, burnout competition, and drag racing.

Some participants live for roll racing, while most of the racers we observed at Charlotte this weekend chose to race from a dig (drag racing). There’s still a degree of uncertainty in the racing outcomes due to the inability to ensure a totally fair start (there’s an element of honor), but some racers maintain that’s part of the fun as well as part of the strategy. In the beginning, you’ll remember drag racing was started by flag, something today’s pro drag racers would walk away from in a second.

We wanted to know if roll racing was the magic bullet that promises to revive interest in the automobile among the younger crowd, or if it was just another Pokémon GO-like flash in the pan. As an illegal and dangerous activity that’s normally conducted on public highways, we hope it catches on. Have Justin and Chase saved any lives along the way? There’s no way to tell for sure, but it’s a good bet they have, or will—as long as it catches on with track operators and racers. That discussion is far from over. To be continued…

So who exactly participates in roll racing, and why? For some, it’s the thrill of doing something for the first time they’ve never done before (or will admit to!). For others, it’s a matter of proving what they already know—but in front of a larger audience with video cameras, cellphones, and live social media. (Who among us hasn’t wanted to spank that idiot in the other lane with the slower machine?) We found five guy at Charlotte with some serious machinery who were waiting in the roll racing line. We asked ’em about their rides and their motivation. Here’s what we found! 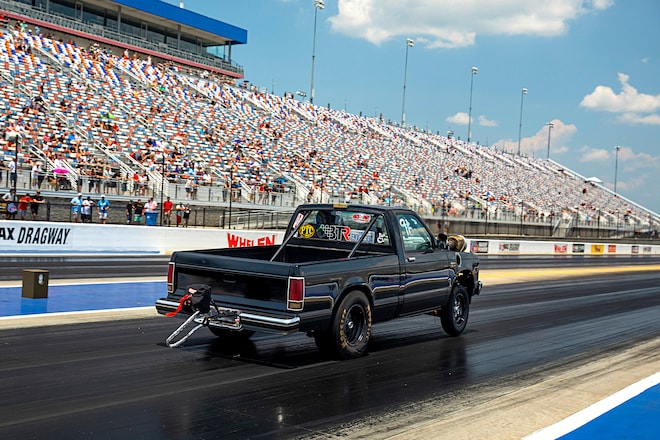 Craig Lewis built his ’88 Chevrolet S-10 in only five months, then blew up the engine on a chassis dyno. Now it has a Cadillac 6.2L L94, an all-aluminum, square-port head LS—a truck-version of the LS3. It features a Brian Tooley Racing Cam and VS Racing S4 88mm turbo kit. Craig built the Turbo 400 himself and added a PTC torque converter. Out back is a Ford 8.8-inch rear axle with Ford Racing 3:55 gears. 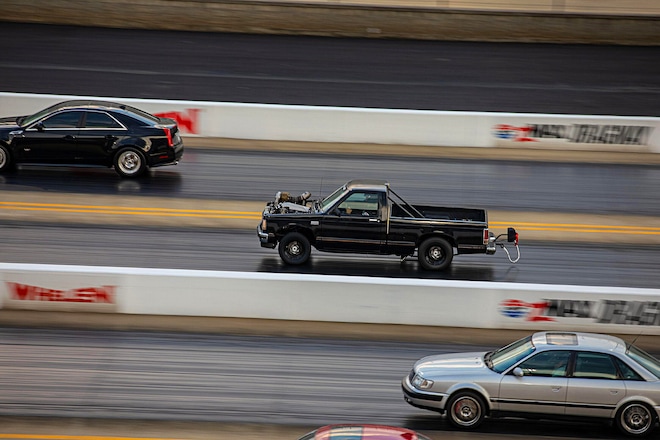 He doesn’t know how much power the truck makes as Craig does only street tuning. He’s a self-taught tuner with a laptop in the passenger seat and EFI Source MS3 Gold Box ECU. 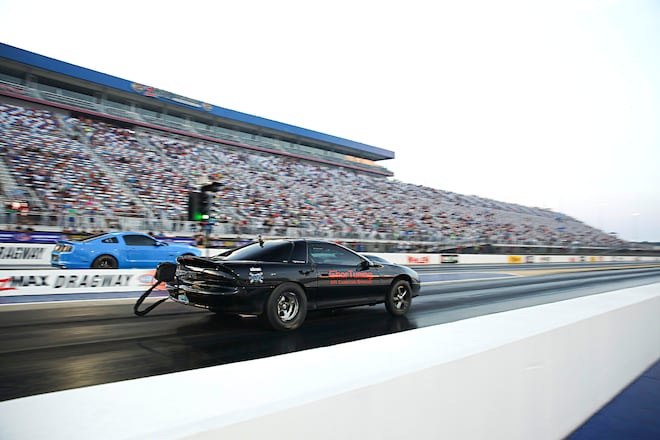 This unsuspecting stick-shift Camaro blew us away with a 178-mph run. Due to a slick track, James Short only did test and tune roll racing and chose to focus on Saturday’s Drag Racing competition classes. Saturday, he ran an 8.37 e.t. at 180 mph.

It’s no surprise his day job is EFI tuning with his shop ShorTuning. The build features a Chevrolet Performance LSX 427ci block with Callies crank and rods, and Diamond pistons. Brian Tooley Racing prepped a pair of Trick Flow 245 heads. The camshaft and pair of twin S45 turbos came from Lil John Motorsports. The Camaro features a Monster Clutch triple-disc unit and Tremec T-56 with the first-through-fourth gears face plated by G-Force. The car has been a best of 8.06 e.t. at 181 mph. 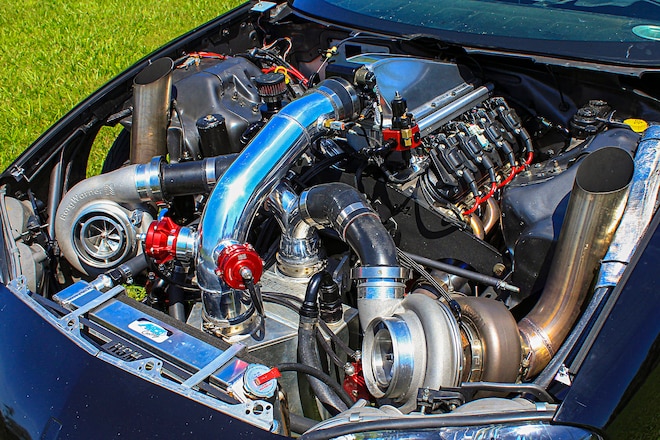 “The roll racing is more or less just to get track data,” said James, who has entered into roll racing competition before, “just to get in some more passes.”

The Viper that killed the Coyote belongs to Financial Advisor Ned Dunphy. His ’14 SRT Viper TA has gone through three complete stages of build with progressively bigger turbos, built by Vengeance Racing. The Viper features a bullet-proof bottom-end built by Late Model Engines (LME) with 80/96mm Garrett T-6 turbos. The engine is capable of a whopping 45 lbs of boost, “but we haven’t seen that yet,” laughed Ned. The team did see 39 lbs of boost during roll racing though and took home the King of the Bakery (Unlimited Class) win with a 184mph run.

“The car was built to do everything,” said Ned. They started half-mile racing, and have a pre-built gear set to swap out—3:55s for quarter-mile racing and 3:00s for half-mile racing. “We then change our shift points and where we lock up the converter. That’s it.” 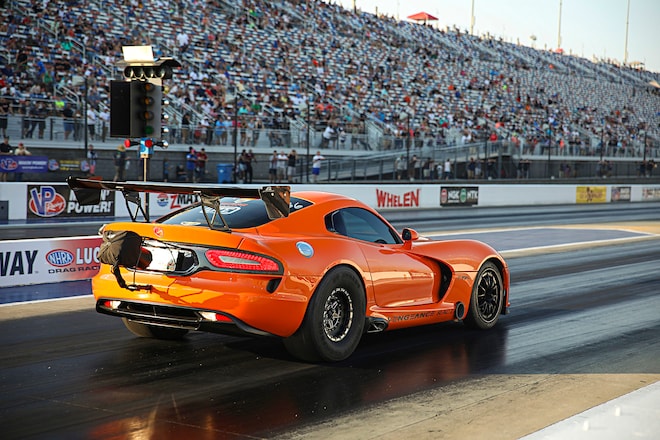 Ned says roll racing is much faster, which allows for a more enjoyable time. “But the G-force on the dig is so much better than the roll,” said Ned, who clocked 1.4 g in roll racing compared to 2.3 g in drag racing. “It’s so much more gratifying, just slams you back in the seat and go.”

Ned entered six classes with two Vipers. After winning roll racing, the orange Viper went on to run a 7.69 e.t. at 190.5 mph for what he believes to be the best Gen-5 Viper pass ever. Nevertheless, his yoke broke while shifting into Second gear during the semi-finals of another class, destroying the differential and oiling the track. Through his ups and downs, Ned’s biggest highlight was walking away with the “Jeff Hagaman Tribute Award.” Jeff was a longtime participant of top-speed events and lost his life in racing last year. 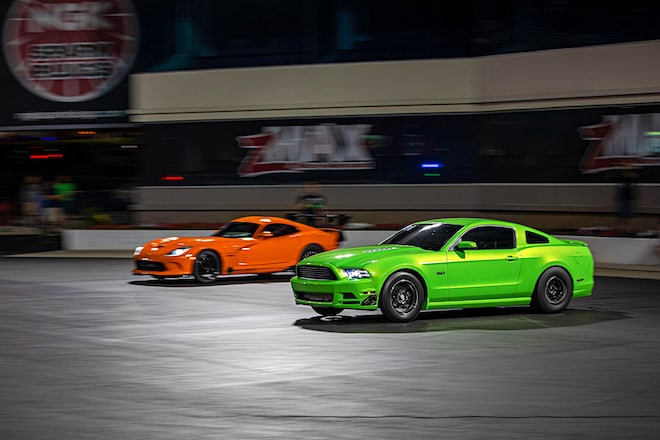 “It’s fun. I mainly like dig racing though. Just because it’s a clean, honest start every time and a more fair race,” said Brett LaSala. “But in roll racing everyone knows that, so it’s just a part of the roll-racing game. I’ll continue to do it.” Here, the left lane leads in the finals, however, Brett lost out to Ned’s Viper pictured in the far lane.

Brett LaSala’s Monster Mustang powered him to a runner-up spot in the King of the Bakery roll racing class. His S197 Mustang is powered by a Fast Forward Racing-built Coyote, which features all forged internals and custom sleeves. It retains the original displacement and even the original heads, but what makes it unique is the bottom-end’s ability to hold up to 35 lbs of boost. Two custom-plumbed 64/66mm Precision turbos feed the boost, and the engine produces 1,600 hp. Li Tuning and Racing of Tampa, Florida performed the tune on an AEM ECU. Out back is a Strange Engineering S-Trac in a stock 8.8-inch rear axle which added bracing. 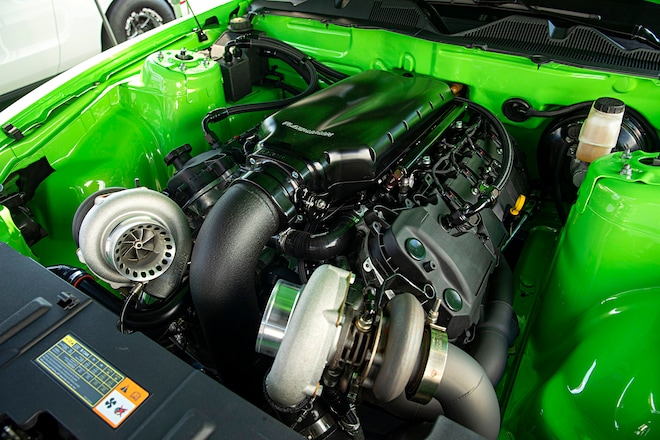 Saturday, Brett ran in the Street Racer class where participants had to perform a street cruise without working on the car in between. The car has run as fast as 7.33 at 187 mph, with Brett running a best of 8.50 ET at 178 mph in Charlotte that day. 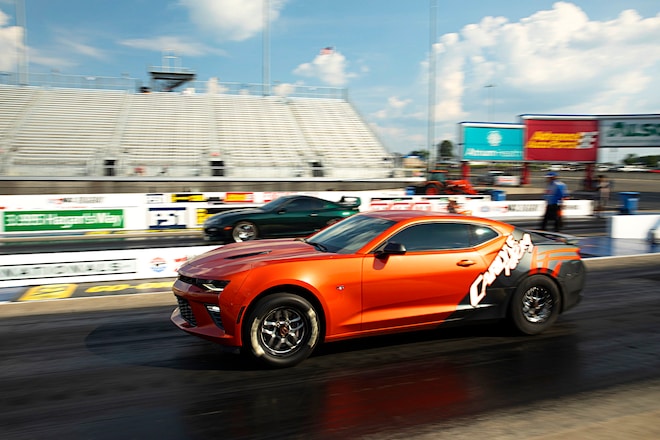 The small, five-person team at Carlyle Racing shares this Camaro. We caught Mike Davis in the driver’s seat after driving it to Charlotte from Ohio. They roll raced, drag raced, then drove it home. The LT1 features forged internals, a 2600 Magnuson supercharger, and long-tube headers, and runs on pump gas or E-85.

The shop Camaro made it three rounds with a best speed of 138 mph. “We spun the tires, and a Porsche got away from us,” said Mike. “It’s the first time trying it, and it’s just something new. It’ll stay around, but it’s not our forte; we’re drag racers.” Saturday, the car went a best of 9.52 at 141 mph. After the event, the team planned to drive it 400 miles home.

All of Street Car Takeover’s events host roll racing, often the day before drag racing. They’re the only national event to hold roll racing. The International Roll Racing Association (IRRA) claims to be the first Roll Racing association ever formed. They host all events at Palm Beach International Raceway in Jupiter, Florida. There are pop-up events at local tracks throughout the U.S. too, so check your local track schedule. 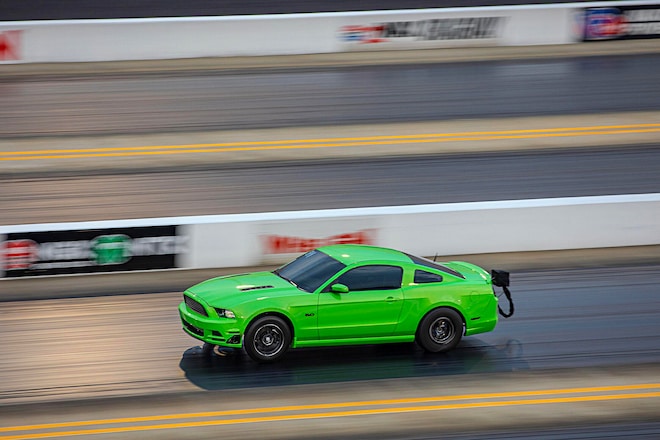