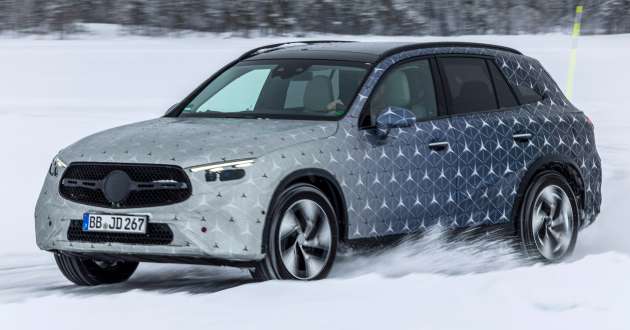 Mercedes-Benz has announced that it has begun winter testing the next-generation X254 GLC, which will make its debut in the autumn of this year (between September to November in Germany). According to the carmaker, the GLC has been its best-selling model for several years, with more than 2.5 million units delivered since 2008 – the company says this figure factors in the GLC’s predecessor, the GLK, which was first introduced that year.

At a test site located in Arjeplog, Sweden, prototypes of the all-new GLC are subjected snowy and icy roads, intense winds and temperatures that dip down to -30 degrees Celsius, all in the pursuit of proving its reliability in extreme conditions.

The SUV is also being tested in other places around the world with different environments, including in Germany at a test site in Immendingen, as well as countries like Austria, Finland, France, Spain, Italy, Dubai, South Africa, USA, Mexico, China and Japan. The carmakers also noted that prototypes have been driven for approximately 7 million km during testing.

To accompany the announcement, Mercedes-Benz also provided plenty of images of the X254 wrapped in some mild camouflage, giving us some idea of what the final product will look like. Based on what we can see, the X254’s profile doesn’t appear to deviate much from the current X253, although there are some notable changes elsewhere. 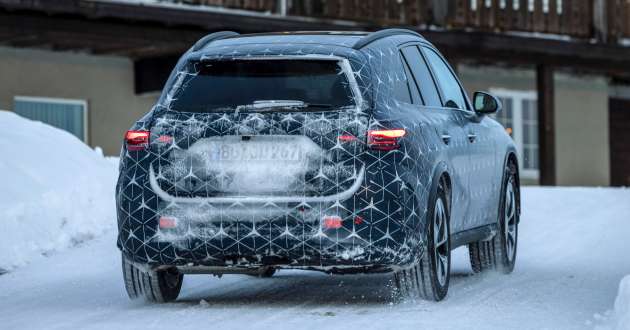 For instance, the window line appears to have been reprofiled to allow for larger windows, of which there are still four separate panes on each side. The door handles have also been relocated further downwards, while the side mirrors are now mounted on the doors instead of being placed close to the A-pillars as on the X253.

Up front, we find a new, hexagonal-shaped, single-slat grille flanked by headlamps that bear a unique daytime running light signature – a full strip placed on top of a dashed line. Large corner intakes can also be roughly seen poking through the camouflage beside the lower centre intake. As for the rear, it looks a lot like the current X253, still with two-piece taillights, albeit without ring-shaped graphics based on the images.

Mercedes-Benz isn’t ready to show us the cabin of the new GLC just yet, but it did provide some random details for us to paint a mental picture. As a start, the SUV will have a new three-spoke steering wheel with redesigned Touch Controls for controlling navigation, telephony or entertainment, as well as the cruise control function or optional proximity control.

Like the W223 S-Class and W206 C-Class – the new GLC will also get the second-generation of the Mercedes-Benz User Experience infotainment system. This will include more advanced voice assistant functions, a special Off-Road menu and augmented reality.

The system comes as standard with a 12.3-inch digital instrument cluster and an 11.9-inch central display, the latter allowing for not just the augmented reality function to work, but also a new (and optional) transparent bonnet that works with the 360-degree camera system to show the real-time view of the ground under the front end, combined with a virtual representation of the driving lane based on the current steering angle.

Other bits of tech include an expanded Energising comfort control, with Energising Coach available to promote wellbeing during a journey by adjusting seat kinetics and other onboard comfort systems. The carmaker’s Digital Light headlamps are also available and come with animations for when you approach or walk away from the vehicle.

In terms of safety and driver assistance systems, the new GLC will get the latest generation of Mercedes-Benz’s Driving Assistance Package, which improves upon what was previously available for the X253.

As an example, Active Distance Assist Distronic can automatically maintain a preset distance from vehicles in front on all types of roads, be it highways, country roads or in town. The function can also respond to stationary vehicles on the road at speeds of up to 100 km/h, an improvement from the previous 60 km/h. 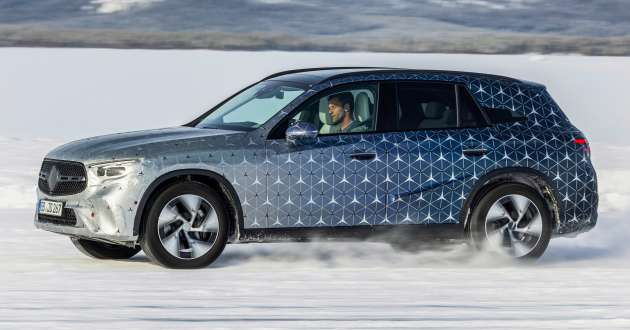 Meanwhile, Active Steering Assist helps the driver to stay in lane at speeds of up to 210 km/h, with new features being additional lane detection with the 360° camera, forming an emergency corridor especially at low speeds, significantly improved availability and performance in bends on country roads and improved lane centring on motorways.

The Traffic Sign Assist will now detect not just conventionally signposted speed limits, but also signs mounted on overhead gantries and in roadworks. Conditional instructions (i.e. “when wet”) are also shown and warnings against driving through stop signs and red lights are included as well. Improved intelligent parking and safer positioning when attempting to hitch a trailer are also included.

Focusing on the mechanical bits, the new GLC with the optional Driving Package will receive air suspension/adjustable damping as well as rear-wheel steering for the first time, the latter capable of an angle of up to 4.5 degrees to make the SUV more agile. 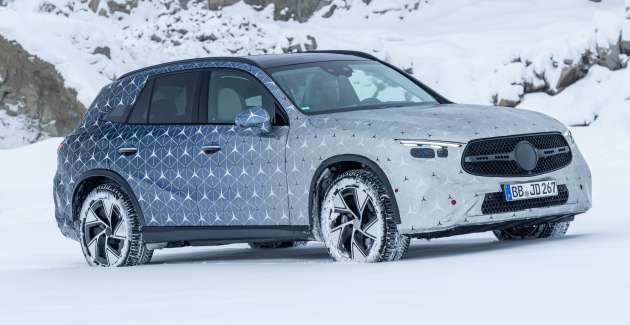 Both engines feature a 48-volt mild hybrid system that integrates a starter-alternator with an output of 23 PS (23 hp or 17 kW) and 250 Nm into the transmission. Mercedes-Benz also says the GLC will be offered with plug-in hybrid powertrains (two petrol, one diesel) based on the mentioned engines.

These will have an electric motor integrated into the traction head of the 9G-Tronic automatic transmission, which has higher outputs of 136 PS (134 hp or 100 kW) and 440 Nm. Further details about the PHEV variants will be revealed later on, but the carmaker claims an electric range of well over 100 km following the WLTP standard. There’s still some time to go before we the next GLC is revealed in full, but do you like what you see so far?