After publishing exterior images of the all-new G90 in late November, Genesis is back with the remaining pieces of the puzzle by showing the posh cabin while talking about the technical specifications. We’ll cut to the chase and hop inside the Long Wheelbase derivative with its spacious rear compartment ideal for VIP passengers. Even if you’re tall, there’s enough room in the back to stretch your legs while the driver does all the work.

As you would expect from a stretched luxury sedan, there’s quilted leather just about everywhere you look. Elsewhere, real metal and wood are combined with forged carbon surfaces to give the G90 a fancy atmosphere from the moment you step inside. For the same effect, the ambient LED lighting has been discreetly integrated into the door cards.

Depending on the seat mode, the 10.2-inch rear touchscreens of the entertainment system automatically adjust for the best viewing angle. Should you want more screens, there’s an eight-inch tablet hosted within the UV light-sterilized armrest box separating the rear seats to control everything from the lighting and climate settings to the massaging seats and the position of the curtains. The interior has been coated in antibacterial Silver Zinc Zeolite material to diminish the probability of bacteria and microorganisms growing on the artificial leather. 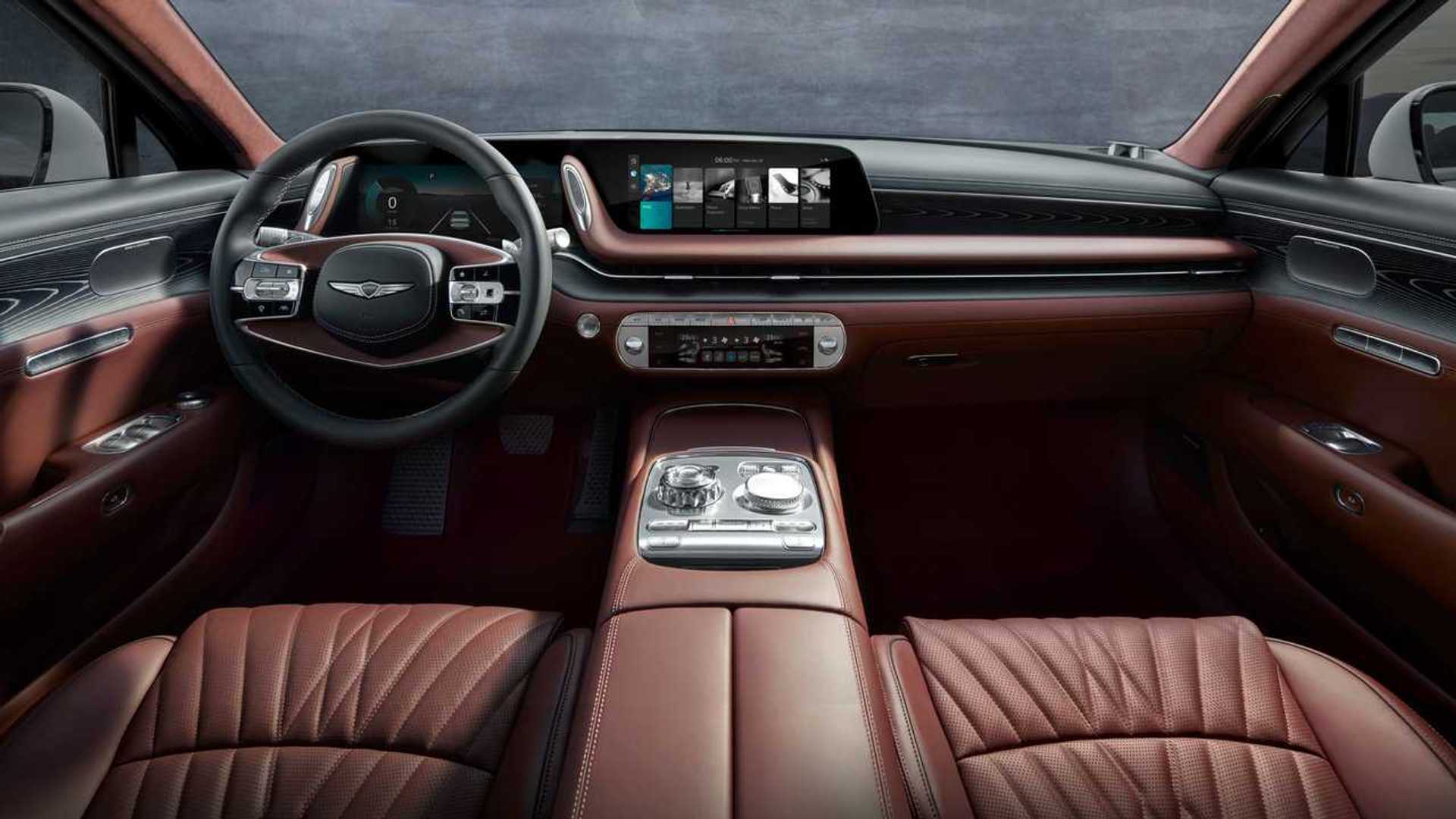 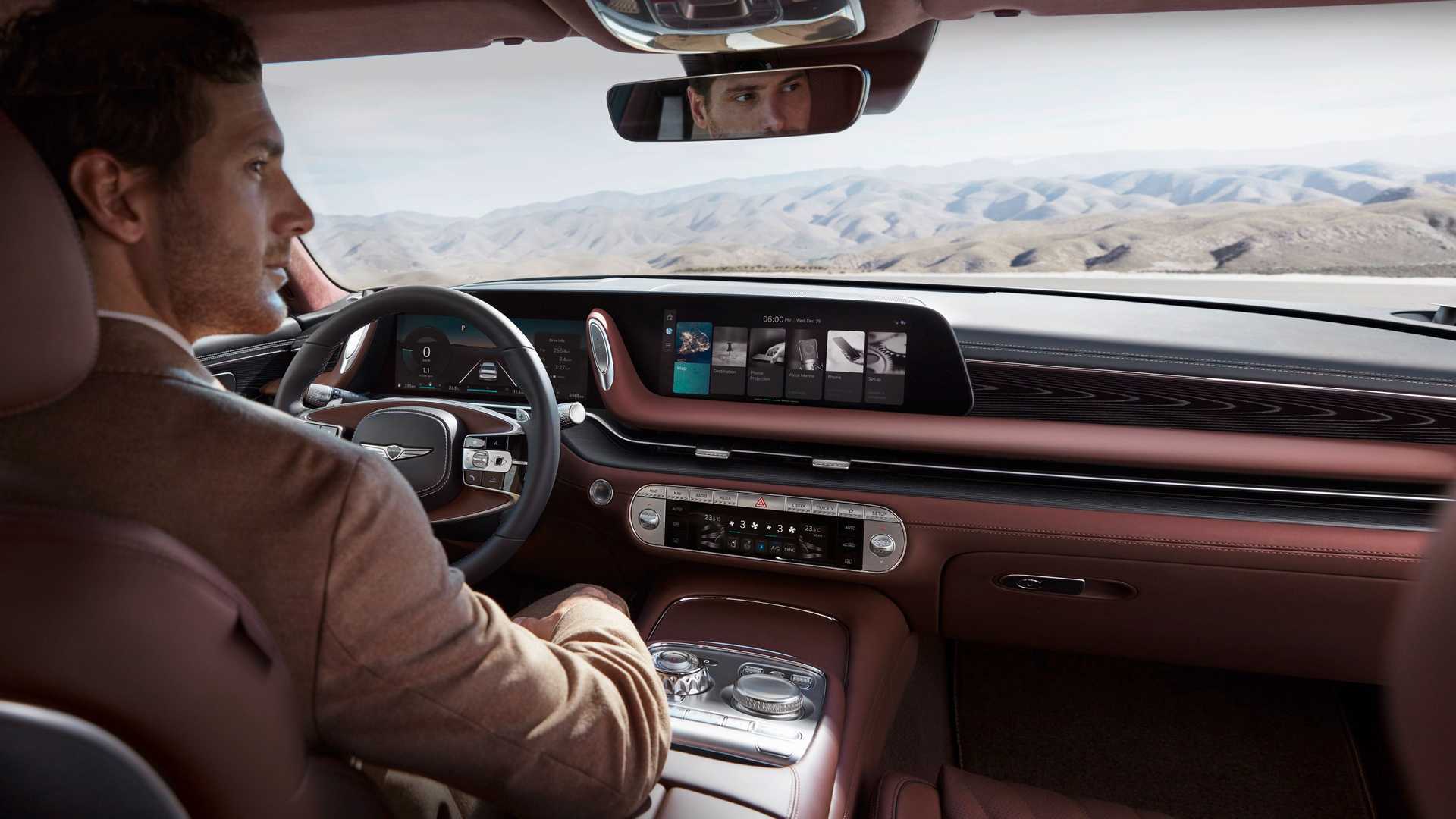 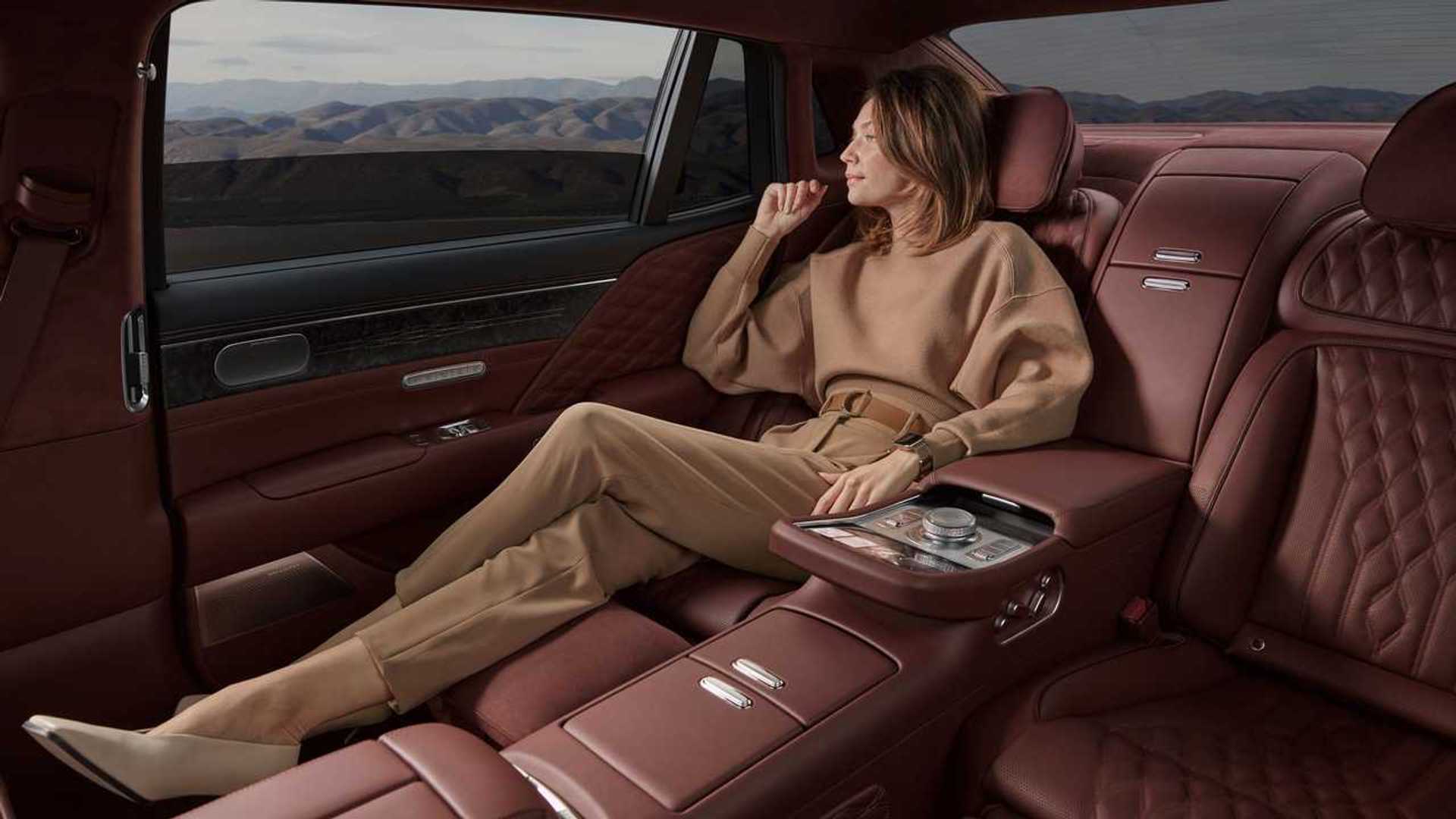 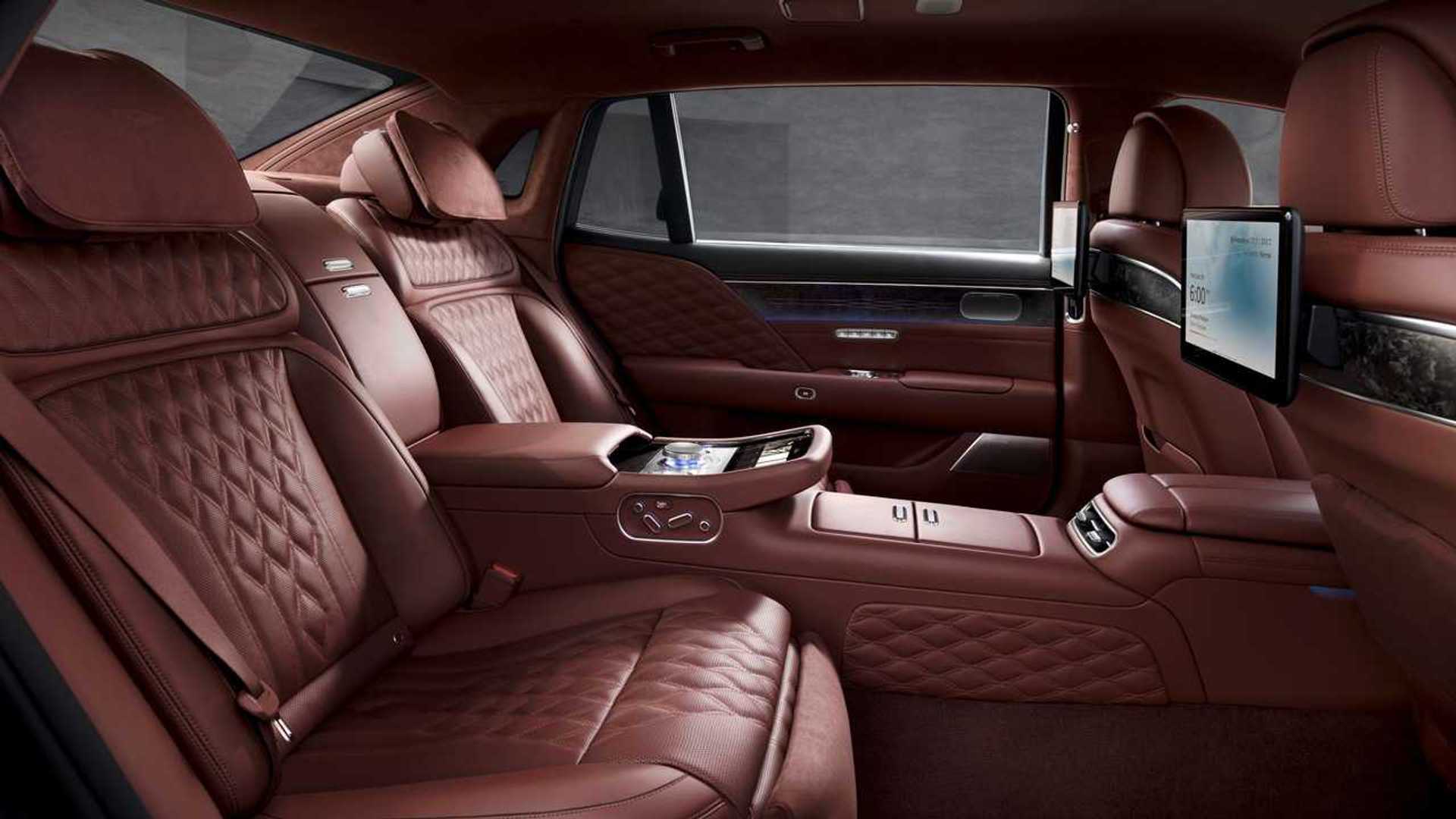 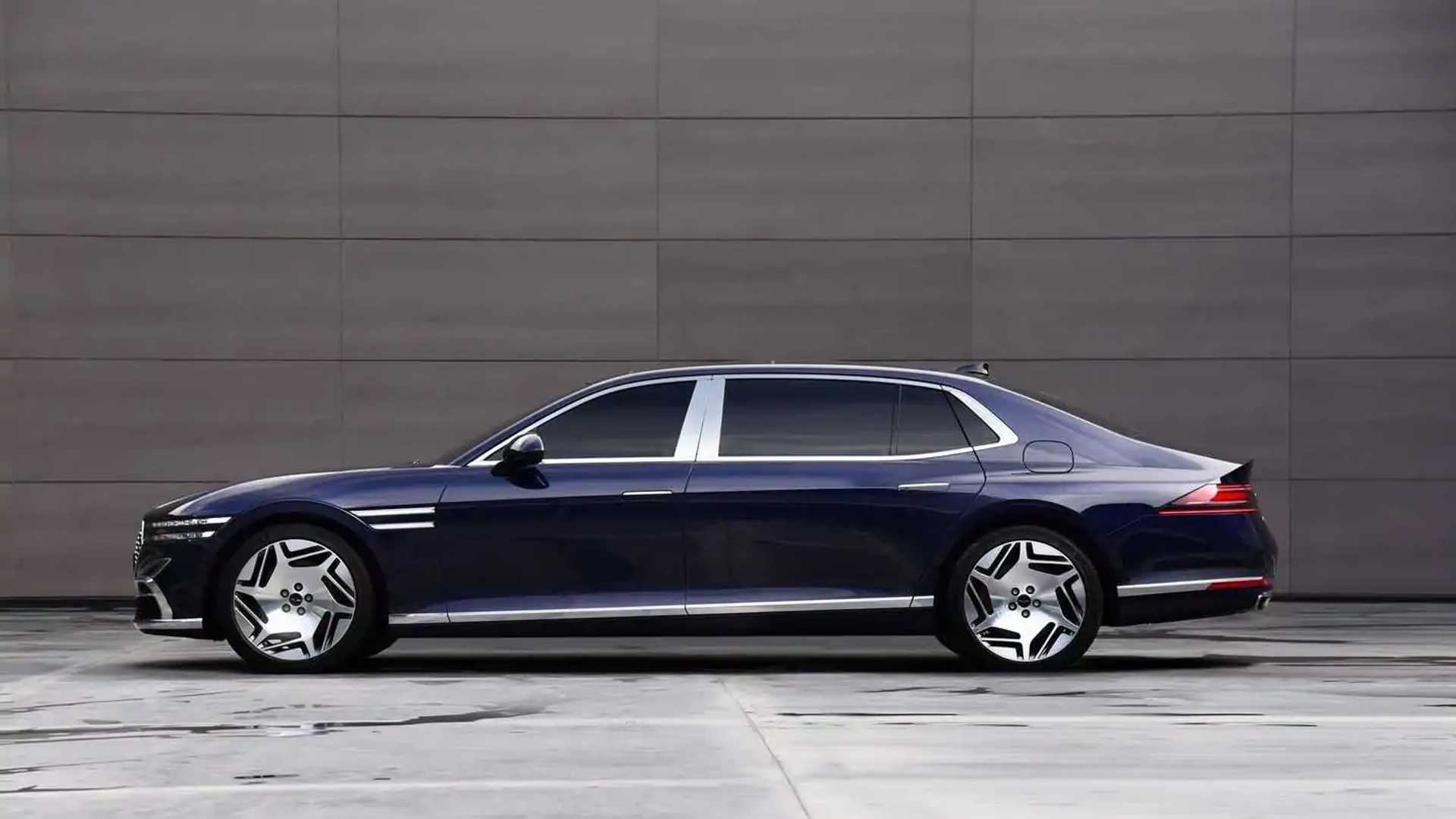 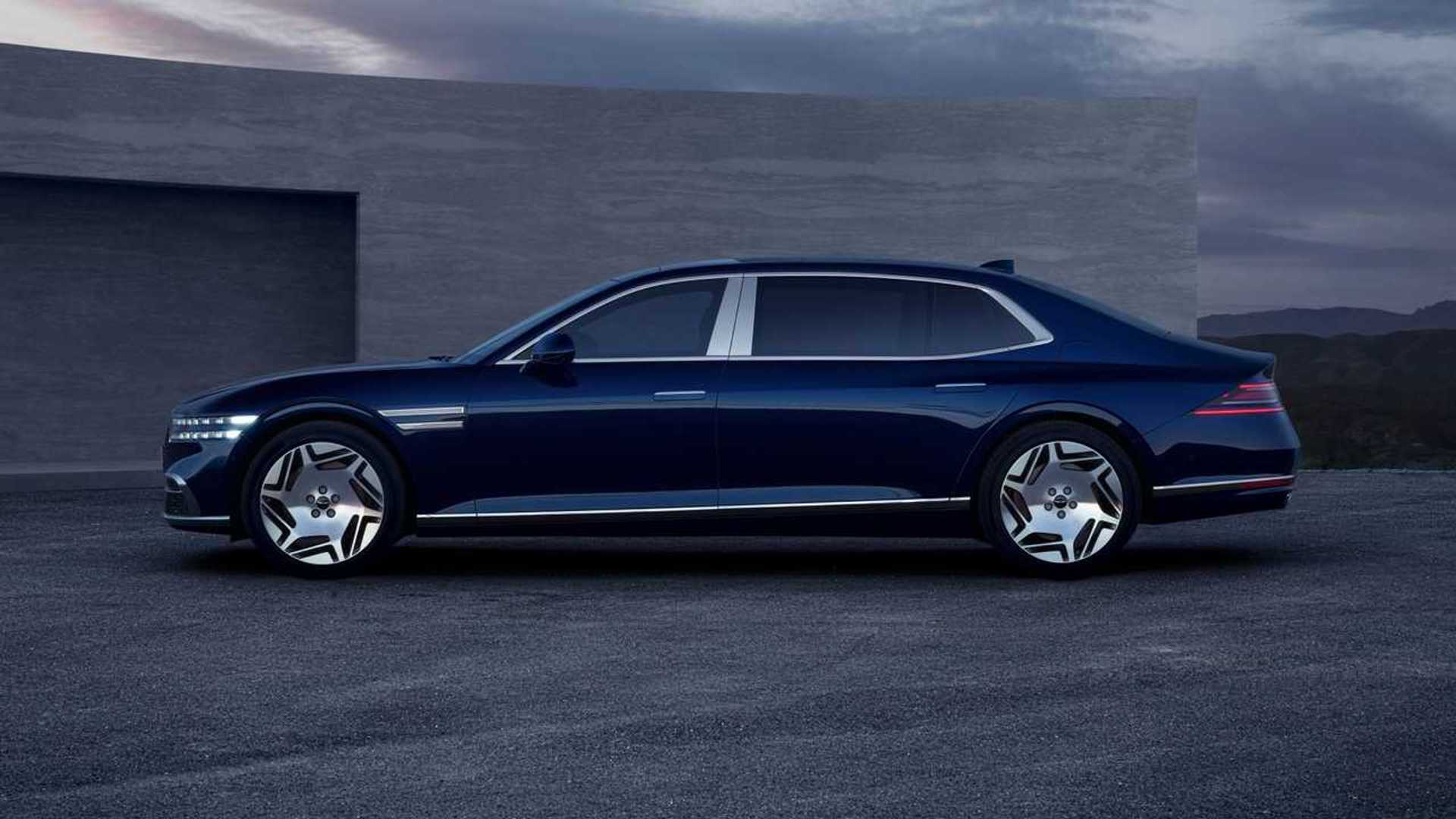 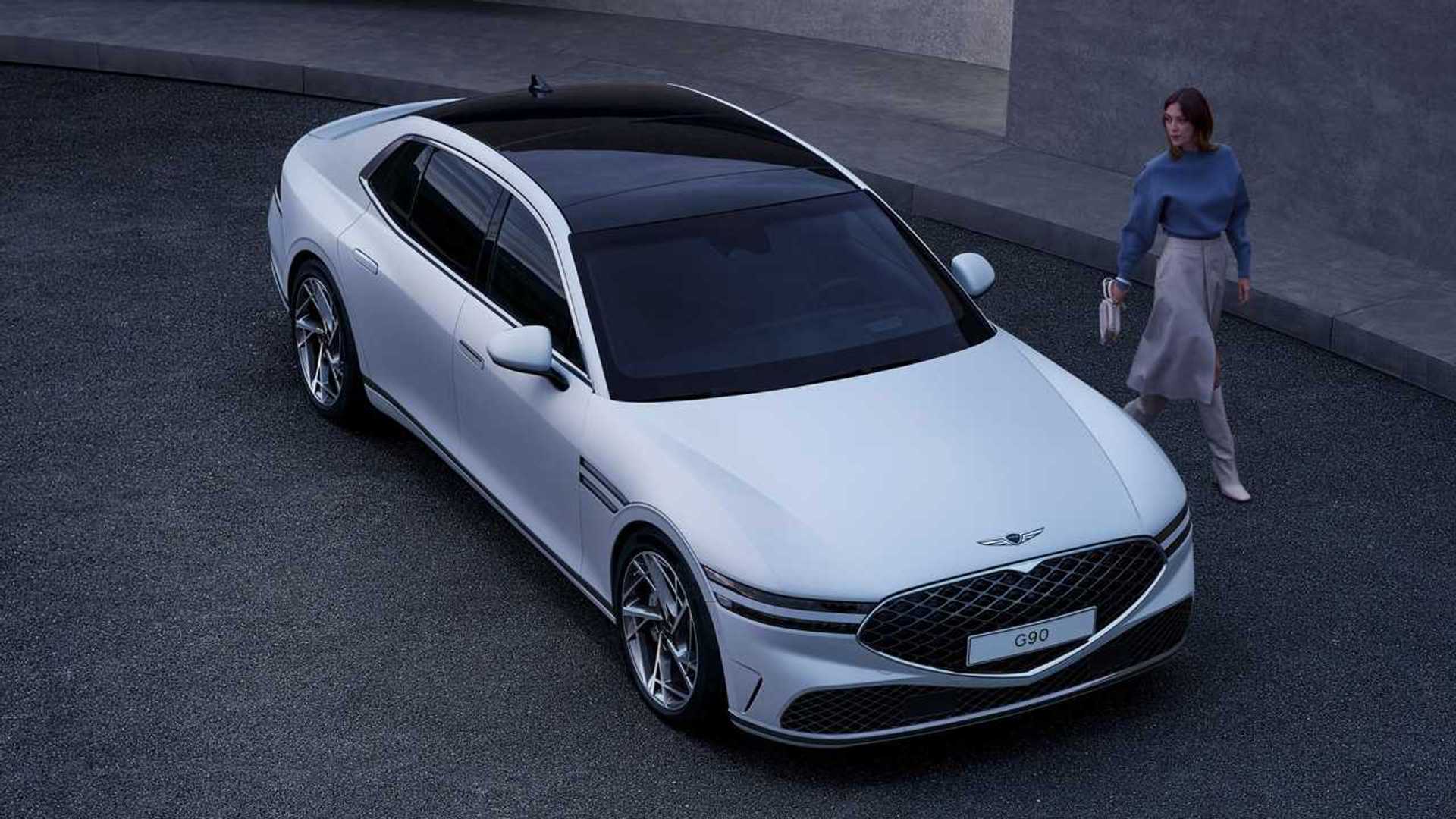 Aside from an air purifier, the revamped G90 is the first Genesis model to come with a built-in fragrance to mirror its German rivals. In case you’re curious, it disperses three scents that have some rather interesting names: The Driver’s Awakening, The Great Outdoors, and My Favorite Place.

Called “ergo-relaxing” seats, these have 10 air cells on the seatback and another two on the cushion, providing four types of body massage and the ability to modify the duration and intensity. Interestingly, the side bolsters automatically inflate at speeds over 81 mph (130 km/h) or when you’re in Sport mode for greater lateral support. They do the exact opposite whenever you enter or exit the cabin.

For a silky-smooth ride, the new G90 boasts predictive air suspension and will jack up the front wheels by 10 millimeters (0.4 inches) while making other tweaks 100 meters (328 feet) before driving over an uneven surface to iron out the road imperfections as much as possible. The front wheels are also elevated when you’re going down a steep slope to prevent damages to the underbody. On rough roads, it will automatically lift the vehicle by 25 mm (nearly one inch) at both axles.

With rear-wheel steering, support for over-the-air updates, digital key (using a smartphone to open the doors and trunk), and fingerprint authentication system, Genesis’ range-topping car is chock-full of tech. It also features a head-up display, noise-canceling, remote parking, and a Hands-On Detection (HOD) system. The latter determines whether the driver is holding the steering wheel when the semi-autonomous driving system is active.

Here are the technical specifications of the 2023 Genesis G90:

As previously reported, the naturally aspirated V8 is gone. However, the silver lining is the 2023 Genesis G90 will use an evolution of the familiar twin-turbo 3.5-liter V6 by featuring an electric supercharger. Known as the e-S/C, it delivers the maximum torque quicker than the regular engine by supercharging compressed air, enabling better acceleration off the line and at medium speeds as well.

It’s only available on the Long Wheelbase model, which comes exclusively in AWD flavor. Genesis has yet to release output figures for this powertrain, indirectly suggesting it will deliver extra oomph compared to the standard V6.

Initially going on sale in South Korea next year, the overhauled G90 will be gradually introduced in other markets, including in the United States where it should arrive for the 2023 model year.