The Chevrolet Montana is a pickup available in the South American market that rides on a unibody chassis, like the Ford Maverick, Hyundai Santa Cruz, and Honda Ridgeline. Motor1.com’s edition in Brazil got ahold of these spy shots of the next-gen version of the truck from the BF///MS Instagram account. Do you think it would be a good fit for Chevy’s lineup in the United States?

The two photos show the truck in camouflage that includes a body wrap with a swirly pattern and fabric covers. However, it’s possible to get a look at the general proportions. A notable design cue is that the C-pillar angles toward the rear of the vehicle, which gives the profile a sleeker appearance. The back window is recessed in a similar style as the Santa Cruz. 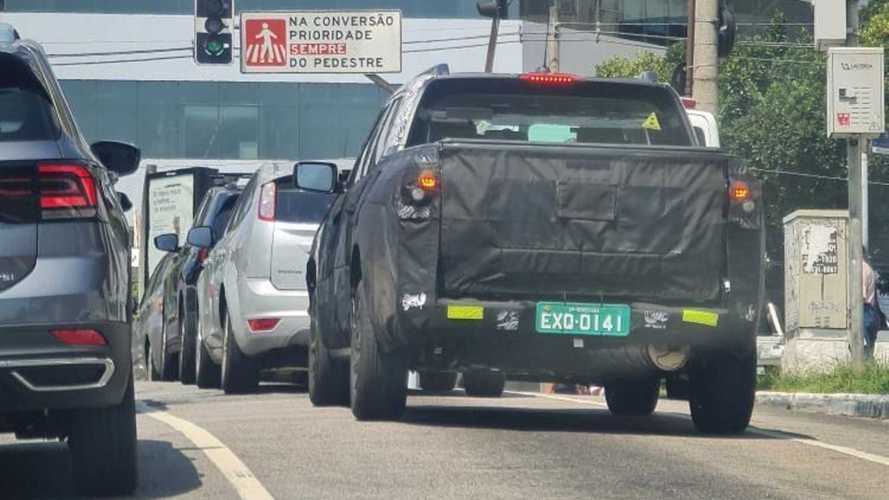 Our Brazilian colleagues note that the new Montana appears to be larger than the current generation. They expect it to measure around 15.4 feet (4.7 meters) long and compete against the Renault Duster Oroch in that market. For comparison, a Santa Cruz is 16.3 feet (4.97 meters) long.

The Brazilian team doesn’t know for certain what engine the new Montana uses. The best guess is that the entry-level powerplant would be a 1.2-liter turbocharged three-cylinder making 133 horsepower (98 kilowatts). This mill is available in the Tracker, with which the Montana shares a platform.

As an upgrade, customers would allegedly be able to get a 1.3-liter turbocharged engine offering 164 hp (122 kW) and 177 pound-feet (239 Newton-meters) of torque. This powerplant is available in the Chinese-market variant of the Tracker.

The Montana reportedly has an 8-inch infotainment screen, and higher trim levels would have wireless Android Auto and Apple CarPlay connectivity. Buyers would also be able to get features like full-LED headlights, blind-spot monitoring, and automatic emergency braking.

The Brazilian team predicts that the new Montana debuts later this year and for pre-sales to begin before 2023.

There’s no indication that Chevy bringing the Montana to the US at this time. However, if the Maverick and Santa Cruz turn out to be popular, then it’s conceivable that the Bowtie would want to have a product to compete against those models.