Just a short time after the G09 BMW XM made its official debut, the standalone BMW M model has been shown on the BMW Malaysia website with a registration-of-interest form for parties interested in the plug-in hybrid performance flagship SUV.

Electric drive is fed by a 25.7 kWh lithium-ion battery mounted underfloor, which powers an electric motor producing 197 PS and 280 Nm of torque, located within the transmission.

Not listed on the Malaysian website, though slated for launch internationally next year is the Label Red variant of the XM, which gets an even more potent internal combustion V8 that packs 577 hp and 750 Nm to go with the same electric drive system, yielding an even more substantial 748 PS and a full 1,000 Nm of torque in combined outputs.

Chassis setup is comprised of double wishbones in front and a five-link setup at the back, joined by adaptive M suspension Professional featuring electronically controlled dampers and active roll stabilisation which employs the 48-volt electrical system to keep the SUV level through turns. 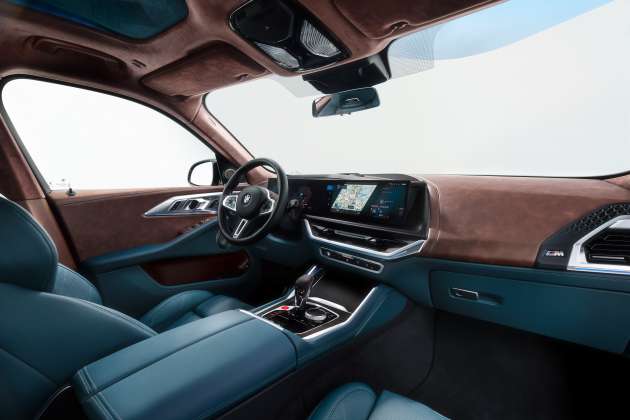 Integral Active Steering provides all-wheel steer, while rolling stock is a set of 21-inch wheels shod in 275/45 front and 315/40 rear tyres, though 22-inch and 23-inch sets are also available for the XM. Brakes are six-piston fixed calipers in front and single-piston floating calipers at the back.

Inside, the XM features the M-specific display that runs BMW Operating System 8, through a curved display combining a 12.3-inch driver’s instrument display and a 14.9-inch touch-capable Control Display. Drawing from the features of current M models, the XM offers individual configuration of parameters, which can be saved into presets that can then be accessed through the M1 and M2 buttons on the steering wheel.

More details for the BMW XM’s Malaysian market entry should be revealed by the company in due course, though in the meantime, what is your preferred flavour of performance flagship SUV?