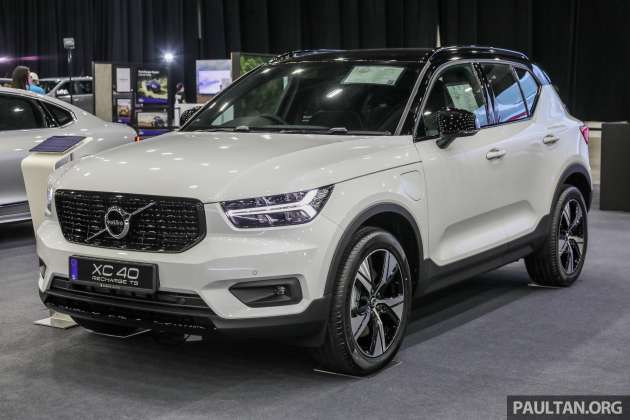 Pricing for the Volvo XC40 has been revised in Malaysia, with the non-EV variants – T5 R-Design and Recharge T5 R-Design – now retailing for more than before.

Starting with the T5 R-Design, the previous price was RM231,651 on-the-road with insurance, inclusive of the ongoing sales and service tax (SST) exemption – this was the revised amount announced together with the launch of the Recharge T5 R-Design last February.

These price changes come with some revisions to the kit list. For starters, both variants no longer come with a private locking function for the glove box and tailgate, a powered tailgate with hands-free operation and a 12-volt power socket in the boot area – a rear seat armrest has been added to both though.

Beyond these changes, the rest of the spec sheet appears to be the same as before. The Recharge T5 powertrain still consists of a a 1.5 litre turbocharged three-cylinder petrol engine that provides 180 PS (178 hp) and 265 Nm of torque.

This is paired with an electric motor rated at 82 PS (81 hp) and 160 Nm that is sandwiched between the engine and a seven-speed wet dual-clutch transmission, resulting in a total system output of 262 PS (258 hp) and 425 Nm. The electric motor draws power from a 10.7-kWh lithium-ion battery that is good for 44 km of pure electric driving.

As for the T5 R-Design, it soldiers on with its 2.0 litre turbocharged four-cylinder petrol engine making 252 PS (249 hp) and 350 Nm, which is mated to an eight-speed automatic and all-wheel drive system. A five-year, unlimited-mileage warranty remains standard, with the PHEV variant also coming with an eight-year, 160,000-km warranty for its battery.