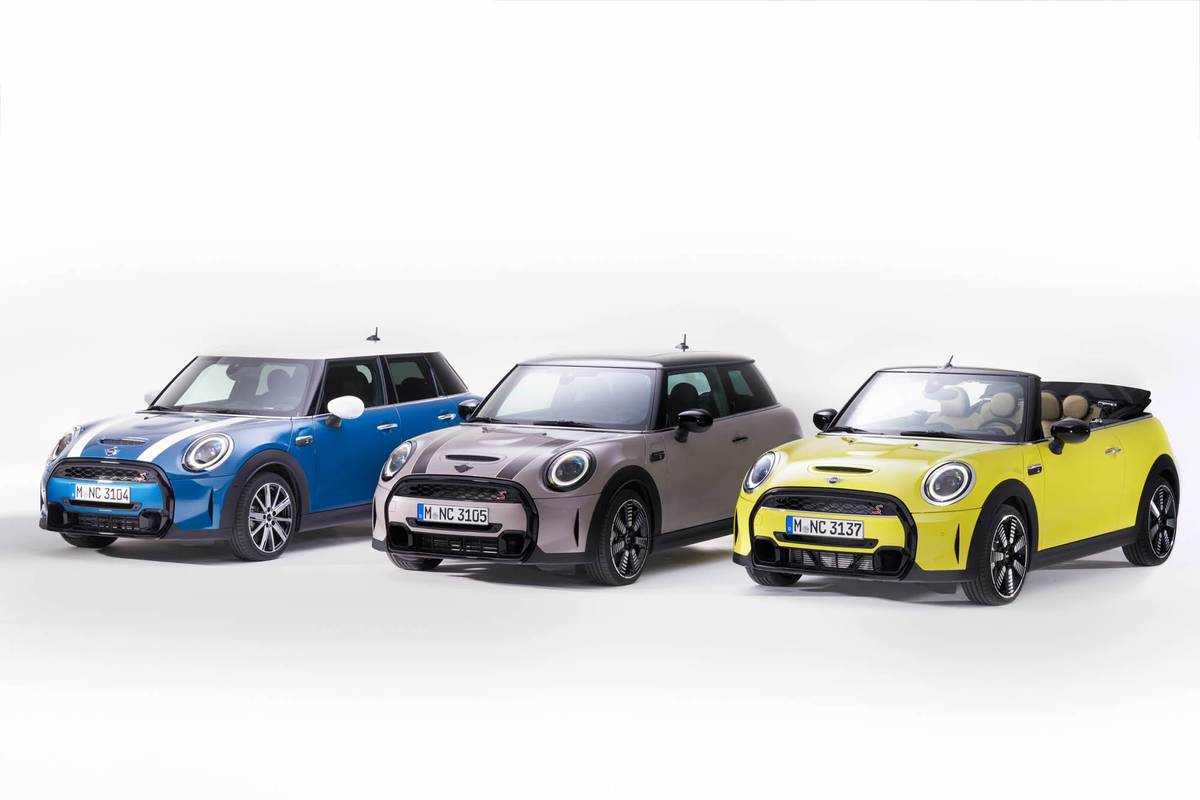 Mini’s Hardtop and Convertible lineup get fresh faces for 2022 along with interior and tech enhancements and more standard safety features. Models affected include the two- and four-door hatchbacks as well as the convertible model in Cooper, Cooper S and John Cooper Works variants.

In front, the updated versions wear a new hexagon grille that extends lower than the previous version and ditches the old foglights for slimmer vertical units. The models’ air intakes also have been integrated into the front bumper for a more cohesive look. LED headlights are standard across the lineup. In back, the brand’s Union Jack LED taillights are also standard, there’s a wider bumper with a hexagonal insert that matches the front, and the twin-tailpipe exhaust system design has been tweaked. John Cooper Works versions get a new rear diffuser.

The cabin also sees some tweaks, such as a new steering wheel design that accommodates a heated function. A previously optional digital gauge cluster is now standard across the lineup, as is the central 8.8-inch multimedia screen.

Model-year 2022 also sees two updates to safety and driver assistance features. The lane departure warning system has been added to Mini’s suite of safety features, which is standard. The models’ adaptive cruise control system also can now brake down to a full stop — but only in models with the automatic and dual-clutch automatic transmissions.

Under the hood, things look very much the same as model-year 2021. The base engine is a 134-horsepower, turbocharged 1.5-liter three-cylinder; a turbocharged 2.0-liter four-cylinder rated at 189 (Cooper S) or 228 hp (John Cooper Works) is available. A six-speed manual transmission is standard, and a seven-speed dual-clutch automatic or eight-speed automatic are optional.

The updated 2022 models go on sale in the spring with minimum price increases. The base 2022 Mini Cooper Hardtop in two-door Classic trim starts at $23,750 (including destination) — $500 more than the outgoing version. Four-door variants add $1,000 across the lineup. Mini says most trims see an increase of around $500 for model-year 2022, though it didn’t say if that would include the 301-hp, twin-turbo four-cylinder John Cooper Works GP performance variant or Oxford Edition value trim at a later date.