Plug-in hybrids don’t get much respect, and frankly, that reputation is partly earned. Too many early plug-in hybrid electric vehicles had electric ranges that barely justified the engineering involved and definitely didn’t overcome the sacrifices they made in other areas, such as cargo or cabin space or drivability. We already ran through the various ways Volvo’s 2021 XC60 Recharge T8 PHEV reverses that trend in my review, but I didn’t include our customary range test to see how far it can drive on electric-only power. Well, here it is.

The Recharge version of the XC60 uses the same engine as the non-hybrids, a 2.0-liter four-cylinder. When just turbocharged, this engine can be tuned to produce 250 horsepower or 258 hp in T5 powertrains, and when simultaneously supercharged and turbocharged, different tuning can produce 316 or 330 hp in T6 powertrains or either 313 or 328 hp in the PHEV Recharge T8 powertrains. Because the T8 system also includes an 87-hp electric motor, the Recharge ends up with the highest output. Though total hybrid system power isn’t usually a simple sum of the gas engine’s and electric motor’s ratings, Volvo assures us that the peaks align directly, and as such the total horsepower ratings are 400 hp for the lower XC60 Recharge T8 trim levels and 415 hp for the Polestar Engineered trim. Torque ratings, Volvo says, are 472 pounds-feet for all T8 versions except the Polestar Engineered, which is 494 pounds-feet.

Greatly benefiting its drivability, the XC60 Recharge uses a conventional eight-speed step-gear transmission, so its responsiveness rivals a conventional powertrain. Now, in our experience the hybrids that sacrifice responsiveness often deliver better efficiency, but at least we determined that the Recharge has better EPA-estimated mpg than all the other XC60s — even if you never plug it in. But plugging it in is the point, so I did, to see how far I could go on a charge.

The EPA rates the XC60 Recharge’s electric range at 18 miles. As my review explained, I think any range below 20 miles is too short for a PHEV — not in practice, but because Americans tend to shop based on feeling, and 18 miles doesn’t feel long enough for them to buy an XC60 Recharge in the first place (fortunately Volvo prices it appropriately, at least). Whatever the case, this test is to see if the car hits its rating — or the range estimated on its instrument panel, which can vary based on factors like outside temperature and driving history. With a full charge, the Volvo predicted it had 21 miles of range, which might reflect favorable temperatures in the 50s. 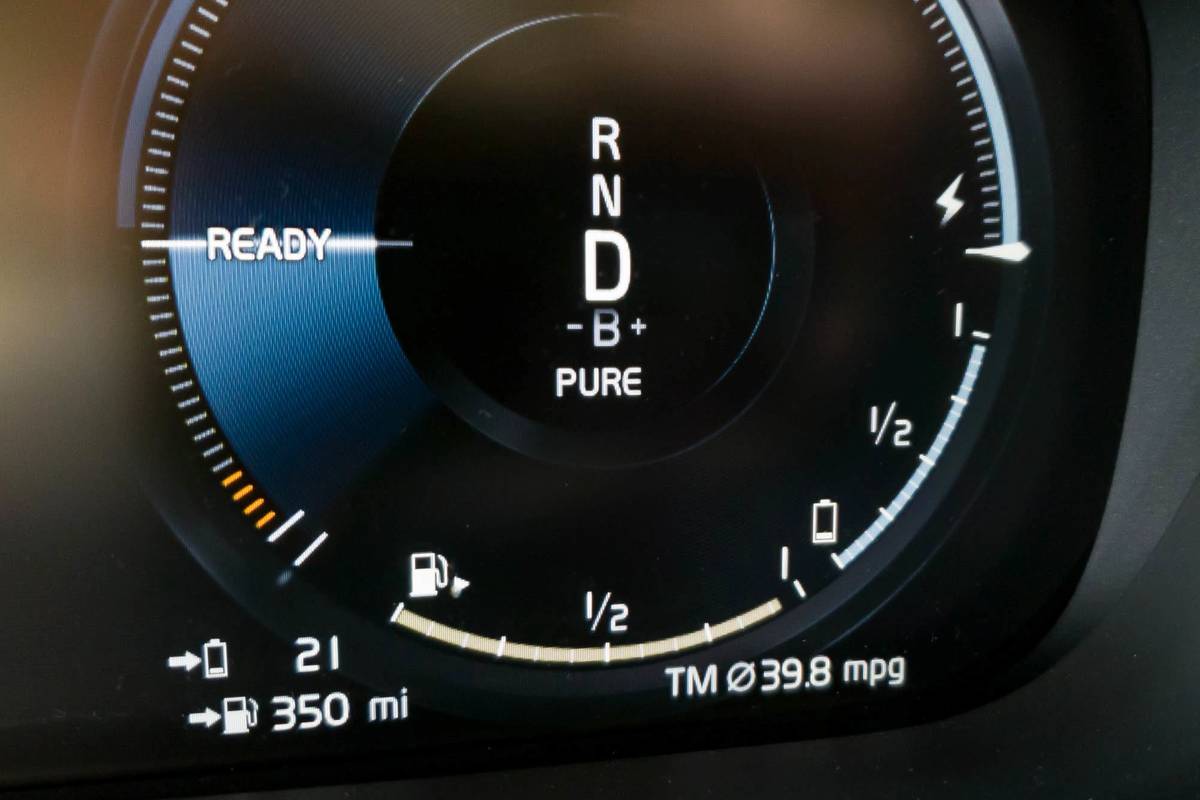 I had to activate Pure mode, which keeps the gas engine from turning on even if you press the accelerator pedal all the way to the floor — unless you press a little harder and click a switch. This mode provides decent acceleration all the way up to highway speeds, whereas the default Hybrid mode would have turned the gas on more readily — and less predictably — to provide full acceleration. (Experimentation proved that once the engine starts, it doesn’t want to turn back off again until it’s warmed up, which would ruin the range test.)

As I described in the review, my region plays to the XC60 Recharge’s advantage because inclines are so gradual you don’t even realize they exist. My driving style for these tests is essentially the same as my driving style any other time, minus acceleration testing or anything like that. I wasn’t attempting to squeeze extra miles, which one can do through various techniques. Still, as I neared 20 miles in electric mode, I wondered if I’d had enough highway miles in my route. Electric vehicles almost always have higher city than highway mpg ratings. Ultimately I traveled 21 miles before the gas engine turned on — exactly as the XC60 had projected, and 3 miles longer than the EPA estimate.

I felt like I should do it again. So a few days later, with another full charge, I intentionally embarked on a route with far more highway driving at speeds around 70 mph. Again the XC60 predicted it had 21 miles of range and, unfortunately, it was in the 60s, so I wasn’t able to test the inevitable range decrease that comes from cold batteries and the use of electric cabin heat.

This time, with about 70% of my trip (by distance) on an interstate, I drove 19 miles before the battery was depleted — 2 miles short of the instrument panel’s prediction but still 1 mile above the EPA rating. I looked up the miles per gallon-equivalent rating for the XC60 Recharge’s electric operation and found it to be 56/57/57 mpg-e city/highway/combined, so it appears there’s no downside to highway driving as defined by EPA, possibly due to the transmission. But bear in mind that “highway driving” means the EPA’s highway test cycle, which doesn’t mean too much of a good thing won’t come back to bite you. I suspect adding considerably more 70 mph driving is what knocked my range down by adding higher-speed driving than the EPA’s test does, even though that cycle includes short segments at 80 mph.

Why to Shop PHEVs With Your Head, Not Heart

To understand why plug-in hybrids can save dollars and make sense, I’ll share the cost of my two electric runs, plus a return trip in Hybrid mode.

I calculate cost based on an actual measurement of power used to charge the empty battery pack after the trip, which accounts for any losses involved with the conversion from AC to DC and even the inevitable few watts a charging system draws when idle after the pack is full (a reality of home charging). The power amounted to 10.7 kilowatt-hours the first time and 10.5 kwh the second. Volvo lists the pack’s capacity as 11.6 kwh, of which 9.1 kwh is “usable,” so this sounds reasonable.

My electricity costs 12 cents per kwh, so the first test worked out to 6.1 cents per mile and the second test to 6.6 cents per mile. In electric land, this is decent. I calculated 5 cents per mile for the 2021 Ford Mustang Mach-E. But the more relevant comparison is to the gas cost.

For comparison, each mile I drove home in Hybrid mode (15 miles from where the battery depleted) cost 14 cents based on the required premium gas. (At the time prices were inflated by Texas refinery shutdowns to $3.69 per gallon, but it would have been 12 cents per mile a month earlier.) So even if I go 19 miles electric and, say 3, with gas, I’m paying half as much for most of the trip on electric power, with no tailpipe emissions.

Your costs will vary based on your gas and electric prices. For a rough estimate, the Department of Energy’s eGallon calculator can juxtapose the cost to drive an average EV versus an average gas vehicle in your state, but it’s based on averages of both vehicle types, and based only on regular gas. If you’re one to dig deeper, find your average price per kilowatt-hour and compare it with the local cost of premium gasoline.

The XC60 Recharge’s battery is small enough that you can get by with the provided 120-volt charging cord and charge overnight. Because this cord supplies up to 12 amperes of current (sometimes these supplied devices are limited to 10 amps), that means a full recharge takes eight to nine hours. 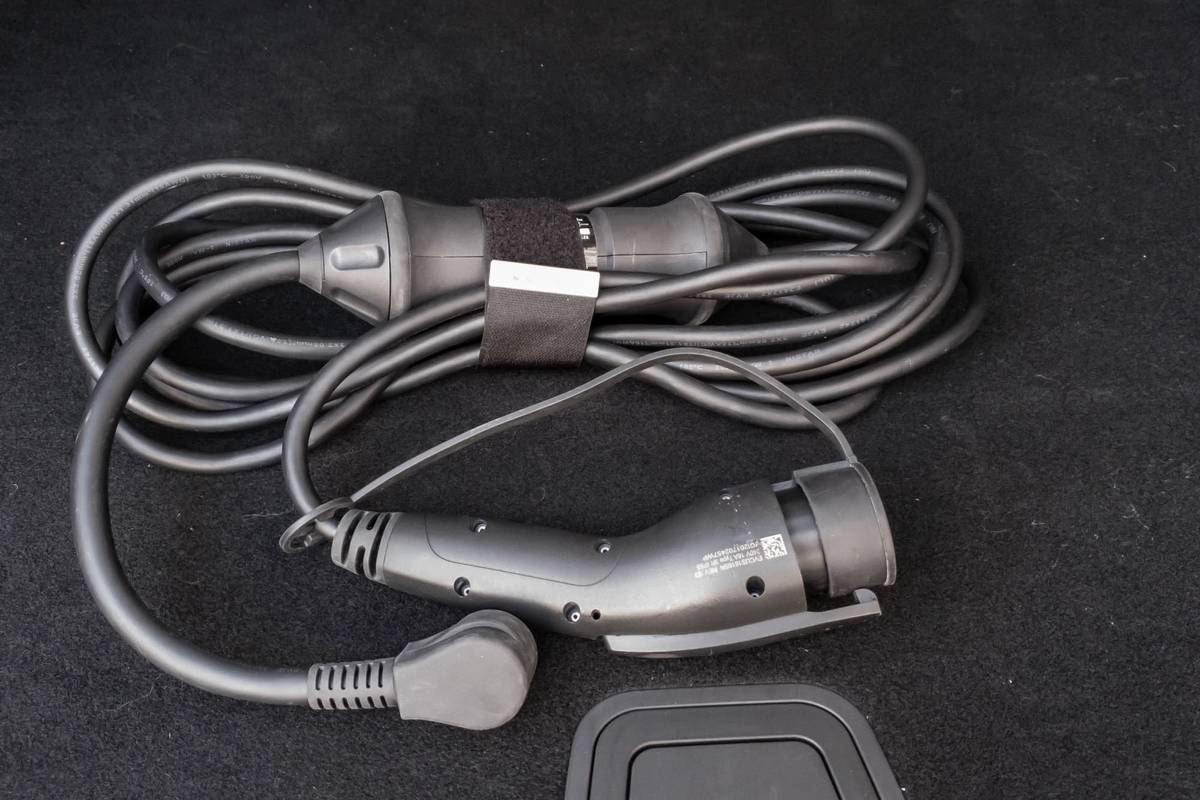 However, I recommend a 240-volt (Level 2) charging system if you can make it happen. Yes, it can knock your charging time in half or better, but the main reason is that pre-heating or -cooling the cabin is a crucial habit with plug-ins that preserves your battery for driving range. In my experience, all plug-in vehicles require more grid power than they get from a 120-volt cord for heating purposes, and it’s often true for air conditioning as well, especially if the vehicle is sitting in the sun when you need pre-cooling most.

There’s no need to go overboard — unless you plan to add a thirstier EV in the future — because the XC60 accepts only 3.6 kilowatts. This means you could get a modest Level 2 system rated at 16 amps to deliver more than twice the power of the supplied cord.