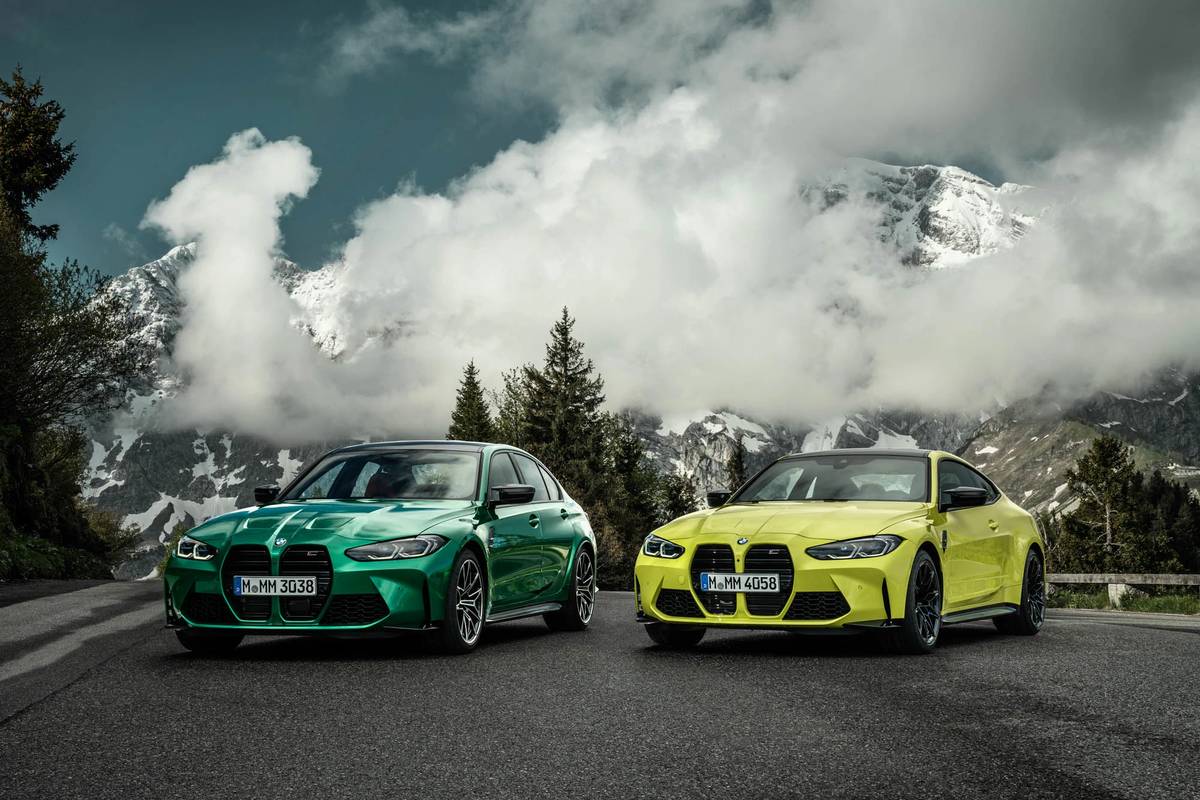 Powertrain: Twin-turbocharged 3.0-liter inline-six-cylinder; 473 horsepower and 406 pounds-feet of torque in base models, 503 hp and 479 pounds-feet in Competition models; six-speed manual (base only) or eight-speed automatic transmission; rear- (base, Competition) or all-wheel (Competition) drive

BMW announced the redesigned 2021 4 Series coupe in June 2020, while its 3 Series sedan sibling’s updates were announced earlier — much earlier, in fact, when it debuted at the 2018 Paris Motor Show as a 2019 model. But we’ve had to wait until now to see the full-bore M3 and M4 performance versions, which aren’t to be confused with the M340 and M440 models (high-performance, if not highest performance, cars).

Of note for manual-transmission enthusiasts, the M3 and M4 will be the only variants of the redesigned 3 Series and 4 Series in the U.S. that offer manual transmissions, BMW confirmed to Cars.com. That should come as welcome, if expensive, news to stick-shift enthusiasts who bemoaned the automatic-only approach when the German automaker announced both cars’ redesigns.

The 4 Series’ debut included a lot of talk about its front styling, particularly the massive grille openings in BMW’s signature kidney shape. Until now, the 3 Series had avoided such controversial styling …

… but that’s no longer the case, as the M3 also has a gaping maw. According to BMW, it’s “designed to feed the massive amounts of air needed for fulfilling the cooling requirements under the most rigorous conditions.” Large intakes on either side of the grille provide air to both cars’ coolant radiators and brakes. Slim vertical intakes at the edges of the front bumper, meanwhile, are part of BMW’s Air Curtain system, which is designed to reduce drag and improve fuel consumption.

Both the M3 and M4 are 4.6 inches longer than their predecessors, with 1.8-inch longer wheelbases than the previous M cars. Width and height grow a smidge on each car, up less than an inch all around. Flared fenders help accommodate wide tires and the wider front track, which is up 1.5 inches on both cars. Up front, the tires are about 10.8 inches wide, while the rears are 11.2 inches. Wheel size is staggered, with 18-inchers up front and 19s in back as standard equipment; Competition models have 19s and 20s, respectively.

Front- and rear-bumper aerodynamic bits join with aggressive side sills to create a ring of gloss-black aero around each car, a nod to the first-generation E30 M3. Slim LED headlights are standard, and both adaptive LED lights with BMW’s Laserlight and dark-accented Shadowline headlights are optional.

Standard on the new M3 and M4 is a roof made of carbon-fiber-reinforced plastic, or CFRP, though a moonroof (and a steel roof surrounding it) is a no-cost option. More carbon fiber is available as part of the M Carbon Package, which gets new front intake inlays, rear diffuser, mirror caps and a rear spoiler — the final item in CFRP. The Shadowline Package adds darkened exterior accents and is optional on the base M3 and M4; it’s standard on Competition versions, but BMW says it can change them back to body-color elements for shoppers who don’t want the look.

New M sport seats in Merino leather feature M-specific perforations and model badging. For the first time in the M3 and M4, seats also can be had with ventilation. Those in search of a racier look can opt for the M Carbon front bucket seats, which still offer power adjustment but shave 21 pounds. The buckets can also be set to a lower seating position than the sport seats; they feature additional bolstering and can accommodate a racing harness instead of the standard shoulder belt.

More carbon fiber is available inside as an option, replacing the standard aluminum trim. It also adds carbon-fiber inlays to the steering wheel and, on Competition models, adds carbon-fiber shift paddles. The steering wheel and gear selector are each wrapped in leather, and the engine stop-start button and steering-wheel-mounted M mode selector buttons have red accents.

The instrument panel is a 12.3-inch fully digital display, and to its right is a 10.25-inch touchscreen that operates the latest version of BMW’s iDrive infotainment system. Wireless Apple CarPlay and Android Auto are standard.

Base models of both cars get BMW’s S58 twin-turbocharged 3.0-liter inline-six-cylinder that debuted in the X3 M and X4 M SUVs. It’s good here for 473 horsepower, 48 hp more than the last M3 and M4, and 406 pounds-feet of torque. Shoppers can pair that to either a six-speed manual or eight-speed automatic transmission. Base models are rear-wheel drive only, and the manual is the only three-pedal setup in any 3 Series or 4 Series for the U.S. market. (That’s not the case globally, as you can still get a manual 3 Series overseas).

Upgrade to the M3 or M4 Competition, and the six-cylinder pumps out 503 hp (59 hp more than the last Competition) and 479 pounds-feet (73 pounds-feet more), but it only pairs with the eight-speed automatic. At launch, the Competition will only be available as a rear-drive model, but an AWD version — a first for the M3 and M4 — will follow. That AWD system offers three driving modes: 4WD (which is to say, AWD) for regular driving, 4WD Sport for more enthusiastic occasions, and a 2WD mode that offers true RWD driving but also turns off the stability control. Competition models also get an additional transmission oil cooler to improve the car’s ability to cool down during hard driving.

Top speed in both base and Competition cars is limited to 155 mph but can increase to 180 mph if buyers opt for the optional M Driver’s Package, which unlocks the extra 25 mph and provides you with BMW driver training.

The M3 and M4 have BMW’s traditional selectable drive modes — and an electrically controlled exhaust that changes tune depending on mode — plus M modes. The M modes include Road for basic driving; Sport, which dials back electronic interventions; and, if buyers add the M Drive Professional option, Track. Track has a complicated activation process, so drivers are less likely to turn it by accident on the road because, as its name implies, it’s for track driving. All driver assistance systems are turned off when Track is activated.

The M3 and M4 come standard with an adaptive suspension and, with the M Drive Professional system, add M Traction Control, which gives the cars’ electronic stability system 10 stages of adjustment.

M Drive Professional also adds what BMW calls the M Drift Analyzer which, as you might have guessed, analyzes your drifting. BMW says it “records the duration, distance covered, line and angle of a drift with a rating shown on the Control Display.” A lap timing function is available, too, and you can further analyze recorded data via an iPhone app.

A 360-degree camera system and self-parking are available as part of the optional Parking Assistance Package.

Rear-drive base and Competition cars will be available in March 2021, according to BMW, with the AWD version to follow sometime in the summer. There Are 19,872 IndyCar Championship Outcomes Between Scott Dixon and Josef Newgarden