Acura keeps sending forget-me-nots. First came the second-generation Acura NSX, a 573-hp mid-engine sign that the brand had been working on itself, made some big changes, and wanted to have a heart-to-heart talk about performance. Now, the 2021 TLX Type S sports sedan has arrived at our doorstep, and its 355-hp V-6 and torque-vectoring all-wheel-drive system are the kind of wooing that totally works on us.

Not to be confused with the relatively mild-mannered 272-hp TLX introduced last year, the Type S brings back Acura’s high-performance line. Set up for use on the street and not necessarily with track driving in mind—that’s where the brand’s Type R moniker comes in—the TLX Type S is intended to compete with the Audi S4s, BMW M340is, and Cadillac CT5-Vs of the world, not more extreme RS models, M cars, or Blackwings. 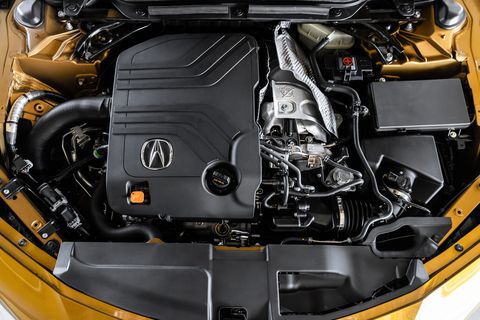 Strong acceleration and only a hint of low-rpm turbo lag is our first impression of the TLX’s V-6. Engineers assure us that this DOHC V-6 is a new design, sharing only its bore spacing with older Honda/Acura engines. A single twin-scroll turbo feeds the cylinders with 15.1 psi of boost. To reduce the height of the engine, the cam cover now incorporates the upper camshaft bearing. It saves space, reduces the number of parts, and makes us wonder why this hasn’t been done in the nearly 120 years of overhead-cam engines.

Acura’s all-wheel-drive system puts the power down with zero fuss, and the conventional 10-speed automatic transmission flutters through its gears imperceptibly. A rush of turbocharged torque at low engine speeds helps keep the gearbox from having to hunt for lower gears on hilly freeways. Power builds aggressively, and the surge is eye-opening, but the V-6 is working against a claimed 4200-pound curb weight. We’ll fit our test equipment to a Type S soon, but our calibrated Levi’s say 60 mph should fall somewhere in the mid-4-second range.

A few turns of the TLX’s thick-rimmed steering wheel, and it’s obvious that the Type S is more than about going straight, thanks in part to Acura’s return to a control-arm front suspension in place of the previous struts. There’s a sweetness and liveliness to this car’s steering and turn-in that makes it seem lighter than its curb weight. Grip levels from the optional 255/35R-20 Pirelli P Zeros are high. Opting for those $800 summer tires also scores you NSX-inspired 20-inch wheels that save a little more than five pounds per corner compared to the standard alloys. 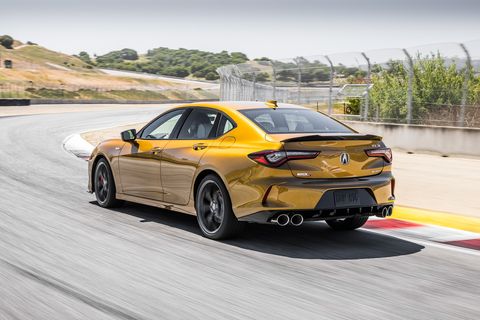 Slightly wider and longer than the German competition that it’s priced against, the TLX is about the length and width of an Audi A6 or BMW 5-series. While the added width means that the TLX doesn’t seem as nimble as its smaller rivals, the body control is excellent. Compared to the regular TLX, Acura fits 40-percent-stiffer front springs and larger anti-roll bars front and rear. Acura’s all-wheel-drive system overdrives the rear end to give the Type S a rear-drive attitude when you’re hard on the throttle. Punch the gas out of corners and the system resists power understeer by shifting torque rearward, which then is split side to side by its torque-vectoring rear differential to create a rear-steer effect. Basically, just stomp the accelerator and the TLX does all the hard math to turn your foot’s request into speed.

Hitting the brake pedal erases speed quickly and confidently. An electrically assisted brake booster is tuned to provide a very firm pedal with good bite. While the minimal brake-pedal travel takes some getting used to, after a few miles we’re adjusted and appreciative. The front rotors measure 14.3 inches (1.3 inches larger than the regular TLX) and are grabbed by four-piston calipers. Acura had us play at WeatherTech Raceway Laguna Seca for a few laps to fully experience the all-wheel-drive system in a safe environment, but in the interest of surviving journalistic abuse on a road course, those on-track TLXs were fitted with track-oriented pads that Acura promises to recommend to interested customers. Back on the street and fitted with the stock pads, the brakes didn’t show any signs of fade on brief canyon-road blasts. 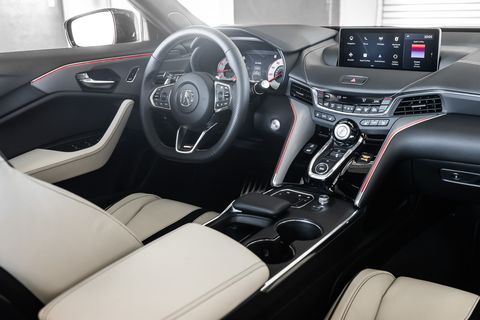 Set the Type S’s Dynamic Control knob to Sport+ mode and its adaptive dampers tighten up and react more quickly to inputs from accelerometers at each corner. Sport+ also makes the car more apt to rotate around corners by upping the rear-steer effect of the torque-vectoring rear end. The 10-speed also responds better in Sport+, but you’ll also want to separately select the transmission’s Sport mode, which seemingly channels racer Alexander Rossi’s brain as it calls up the right gears under braking and fires off quick upshifts at the engine’s redline. Paddle shifters on the back of the steering wheel are included, but the gearbox does such a fine job of picking through its 10 ratios that we didn’t see a pressing need to override it.

Dial back to Normal mode, and a mellower Type S emerges. The active exhaust remains less prone to shouting, and the steering effort decreases while maintaining its tactility. But even in its softest setting, the ride remains on the firm side and the occasional bump will ripple through the suspension and structure. Acura stiffened the Type S’s body over the standard car with gussets, cross bars to tie the front shock towers together, floor stiffeners, and an A-brace behind the rear seatback. The structure is certainly stiff. But when driven back to back with a showroom-fresh Audi S4 that Acura brought out for a Pepsi challenge, the Audi’s suspension isolation and structure felt just a little more buttoned up. Although we did find the TLX had livelier and more talkative steering, stronger and more satisfying brakes, and similar acceleration. 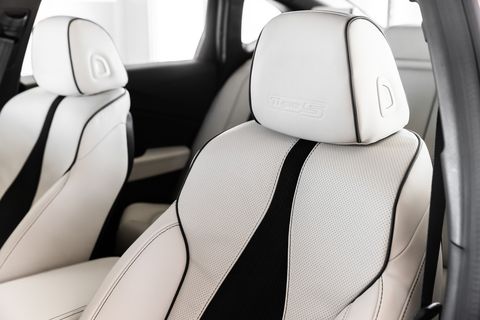 The TLX’s size is obvious inside, where a wide center console houses Acura’s difficult-to-use touchpad infotainment controller. That interface is not getting easier to operate with practice, and it never seems to respond to your finger the same way twice. A spacious and comfortable front seat with an easily tailored seating position is the perfect place to appreciate high Gs, whether it’s g-forces or music. Start turning the volume knob, conveniently positioned next to the touchpad, to hear the fabulous Panasonic ELS audio system. It has the punch and clarity to turn you into a stereo snob, and it probably won’t take long before you find yourself searching for Free Lossless Audio Codecs (FLAC) files to play through the system’s 17 speakers.

Simple and elegant analog gauges might buck the glass-cockpit sports-sedan norm, but leather and Ultrasuede seats, metal pedals and trim, and a stitched instrument panel are right in line with competitors. Rear-seat riders get a supportive bench, but the legroom and space in back isn’t what we’d call generous, despite the car’s 113.0-inch wheelbase. At highway speeds, the Type S’s cabin remains hushed, although working the engine or switching to Sport or Sport+ will increase the amount of V-6 sound pumped into the cabin. 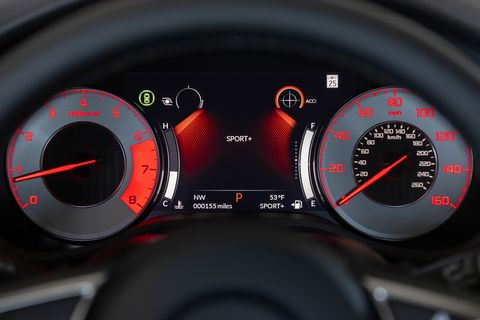 Acura’s desire to be considered and remembered by sports-sedan buyers is obvious in the Type S’s price. The entry point is $53,325, and the only extra-cost bits are $800 wheels and tires. Comparably equipped, the German competition is more expensive, although a bare-bones S4 can be had for less than the TLX Type S. A Cadillac CT5-V can undercut the TLX’s price, but again, with all-wheel drive and similar trimmings, the Cadillac rises beyond the Acura and into the mid-$50Ks. A fully loaded Genesis G70 3.3T costs less than the TLX, but it’s closer in size to a smaller BMW 3-series.

After a brief exposure to the TLX Type S, we’re eager to spend more time with it and to subject it to our battery of instrumented tests and a comparison test. Fun to drive, quick, and athletic, Acura’s new sports sedan is another sign that the brand is getting serious about going after performance-car buyers.