The current generation Nissan Sentra is one very good-looking sedan that was completely redesigned for the 2020 model year. For the current model year, there’s a Midnight Edition Package that’s available for the SR trim, complementing the already wide Sentra portfolio. But back in 1992, the model was just a humble three-box vehicle, which was also offered in a two-door configuration – something you won’t see at Nissan’s showrooms today.

This is probably one of the main reasons why this absolutely mint 1992 Sentra SE-R sold for good money just a few days ago. The listing on Bring a Trailer ended earlier this week and the car’s new owner will have to pay $33,500 for the black two-door sedan. Or, to put that number into perspective, that’s more than what a fully loaded 2022 Sentra costs today. 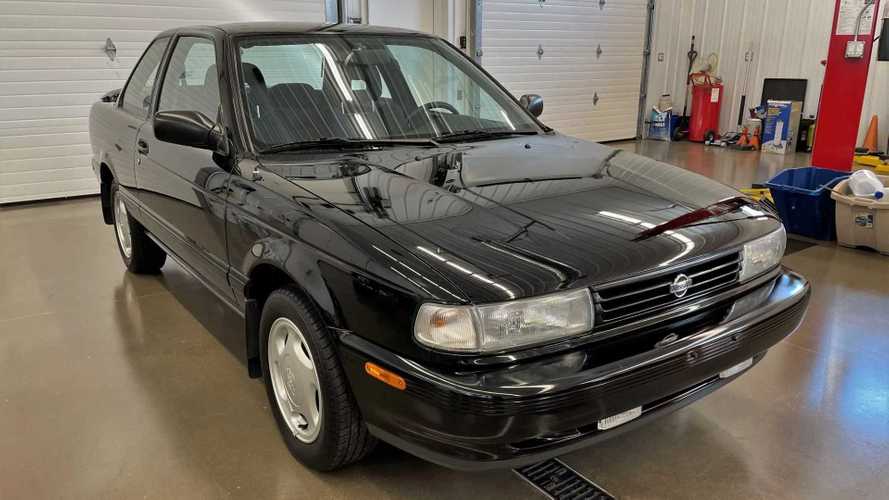 But you can easily say this 1992 Sentra is also brand new. With just 445 miles shown on the odometer, it’s a 1990s time capsule in fully original condition. There’s not a single spot of rust, the paint is immaculate, and the interior looks as nice as the day the car left the factory. The exterior is spotless, too, and that’s probably due to the fact that a paintless dent removal was performed in 2001.

By today’s standards, the 14-inch wheels sound laughable. But the original 14s on this Sentra, wrapped in 185/60 Dunlop Sp Sport D87 tires showing 1991 date codes, are a perfect match for the humble overall appearance of the two-door sedan. An independent suspension is seen on all four wheels and four disc brakes provide the stopping power.

Under the hood, there’s a 2.0-liter naturally aspirated inline-four engine. It uses twin-cam technology and multi-point fuel injection and is good for 140 horsepower (104 kilowatts) and 132 pound-feet (179 Newton-meters) of torque. It is surely not going to impress anyone but here’s our take – it’s definitely more exciting to drive than a new downsized three-cylinder unit.