Repsol Honda racer Marc Marquez secured yet another win of the season in the 2019 MotoGP German Grand Prix. The reigning world champion took his tenth consecutive win at Sachsenring, beating Yamaha’s Maverick Vinales to the top spot, while podium contender Alex Rins of Suzuki crashed in the final stages. Coming in third on the podium was Cal Crutchlow of LCR Honda in a highly impressive finish, considering the rider is struggling to walk with a fractured right knee. With dominant win in the German GP, Marquez gains a 58 point advantage in the overall rider standings for the season. 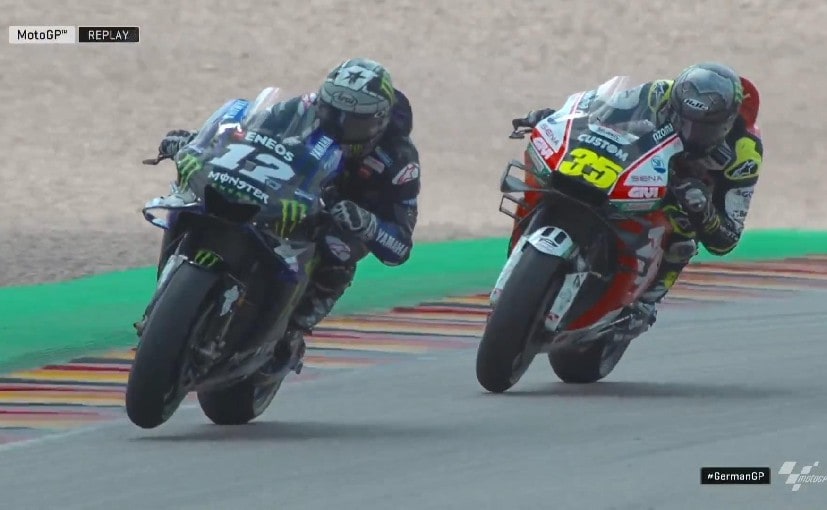 The German GP started with Marquez on pole but the rider had a slow start allowing Petronas Yamaha’s Fabio Quartararo to take the lead. But Marquez outbraked Quartararo on Turn 1 on the outside to regain the top spot. Quartararo had a difficult time recovering from that and dropped a couple of spots to sixth as factory riders Rins and Vinales passed him soon, followed by a number of Ducatis. The rider crashed soon after while trying pass Danilo Petrucci of Ducati on Lap 2.

Meanwhile, Marquez was being pressured by Vinales in the initial laps, but the factory Yamaha rider could not match the former’s pace. Vinales soon distanced himself from Marquez allowing Alex Rins to take P2. But Rins wasn’t able to match the Honda’s pace either  and unfortunately had a crash at Turn 11 as the race was in its advanced stages. This was also Rins’ second consecutive DNF after Assen, in what has been a promising season for the rider so far. 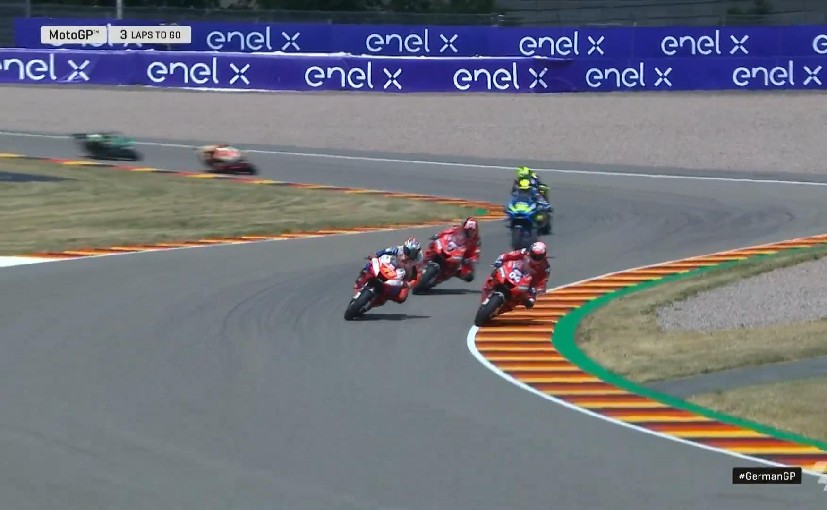 It was a three-way battle for Ducati riders Dovizioso, Petrucci and Miller as they battled for fourth place

Marquez was now leading the race five seconds clear of Vinales who was promoted to second after the Suzuki’s crash. The Honda champion went on to secure his fifth win of the year by a gap of 4.587s. Cal Crutchlow showed remarkable poise in the race to finish on the podium, his second since the season opener at Qatar.

The fourth position remained a point of contention in a three-way battle between the Ducatis of Andrea Dovizioso, Danilo Petrucci and Jack Miller. Fresh from being confirmed at Ducati, Petrucci held on to the fourth position for most of the race but Dovizioso passed his teammate with three laps to go and was passed by Miller as well dropping to sixth. However, the Dovi couldn’t hold on the spot for long with Petrucci passing the Ducati riders once again in the final stages to finish 0.062s clear off his Dovizioso. Miller finished sixth eventually, not too far from the factory Ducatis, and ahead of Joan Mir of Suzuki.