Repsol Honda’s Marc Marquez has sealed the 2019 MotoGP championship title, after beating Petronas Yamaha rider Fabio Quartararo in a last lap battle in the Thailand Grand Prix. The Honda star needed to score at least two points more than Ducati’s Andrea Dovizioso in the Thailand GP to secure the world title, his sixth premier-class title and eighth MotoGP title, with four races left in the season. Marquez is now just one premier class title away that of Valentino Rossi and two from Giacomo Agostini. The 26-year-old continued to show his zeal for victory in the Thailand GP, more so, after a major crash during FP1 on Friday left him with injuries. 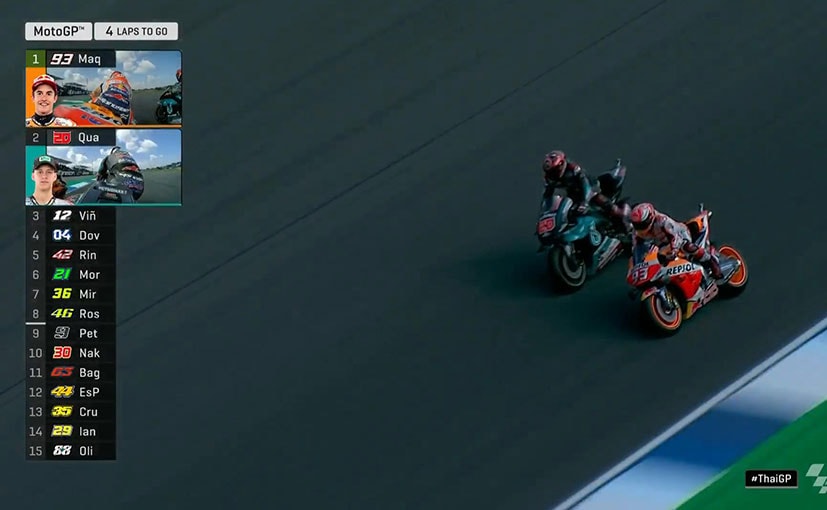 A braking mistake soon after saw the Petronas rider regain the lead.

The Thailand GP started with Quartararo on pole position, his fourth this season, while Marquez qualified third on the grid, with Yamaha’s Maverick Vinales in second place. Quartararo was quick off the line and maintained his lead while Marquez was quick to jump to second passing Vinales, but not before facing competition from the factory Yamaha rider on the opening lap. The rider though managed to retain his position on Turn 3 and then slip-streamed past Quartararo to take P1. However, a braking mistake soon after saw the Petronas rider regain the lead, while the Honda rider only managed to save himself from Vinales. 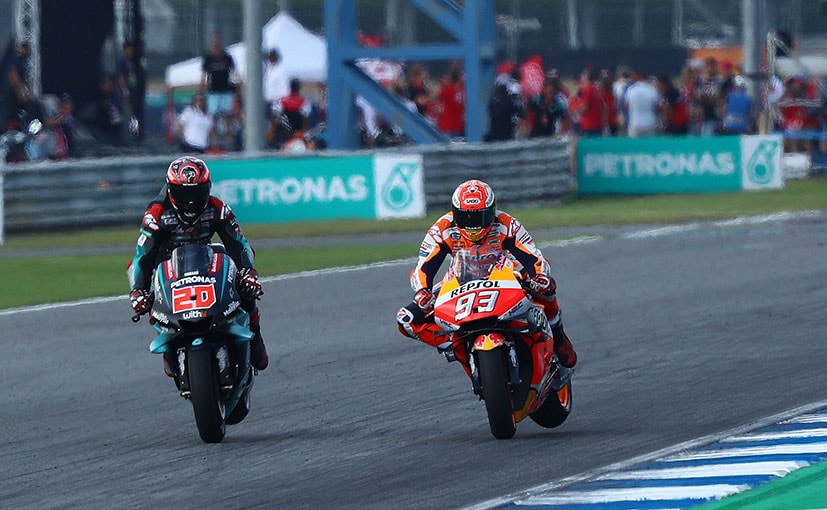 It was a close battle between the riders as the Honda man built pressure on the satellite rider as the laps progressed.

The top three riders ran close as the laps progressed and Marquez was hot on Quartararo’s tail. The top riders though soon started to detach from the rest of the pack and Vinales was now three seconds off by the lead pair as the race entered Lap 11. Quartararo had built up pace by then and wasn’t having Marquez have this one easy. The young rookie was over seven tenths in the following laps, only for Marquez to catch up as the race crossed Lap 13. It was a close battle between the riders as the Honda man built pressure on the satellite rider as the laps progressed over the next 10 laps. 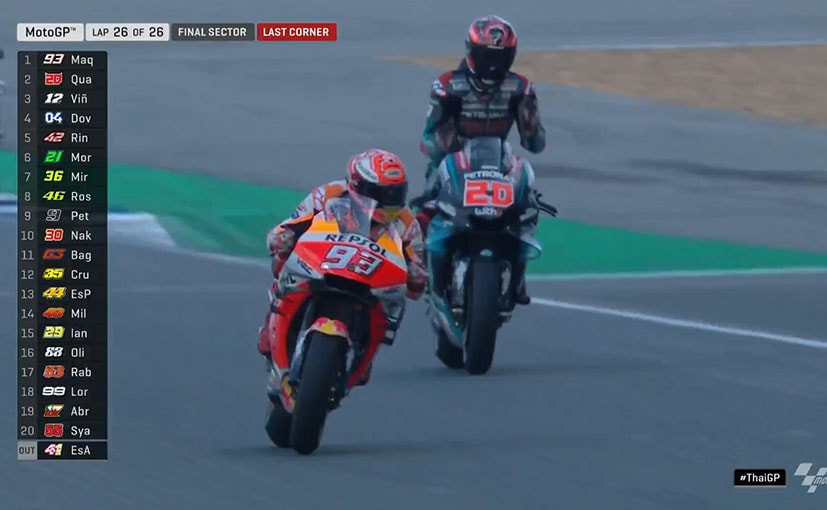 Marquez made a final attempt to pass Quartararo using the slipstream.

Marquez finally found a formidable chance to get past Quartararo on Lap 23 when he tried to overtake on the outside of Turn 3, but could not succeed. Another attempt followed on the following lap on the same corner but it still wasn’t enough to disturb Quartararo’s lead, as he looked confident of claiming his maiden win. However, as the race moved into the final lap, Marquez made a final attempt to pass Quartararo using the slipstream once again on Turn 3, braking late into the corner and stopping just in time to exit the corner ahead.

Quartararo was by no means off pace and stayed close to the Honda rider as the two battled till the last corner of the lap. The Petronas rider’s best was not enough though as Marquez crossed the chequered flag with a lead of 0.171s over Quartararo, while Vinales secured P3 with a gap of 1.380s over the leader. Meanwhile, the second placed Dovizioso in the rider standings finished fourth, allowing Marquez to extend his points lead further and claim the world title for 2019. 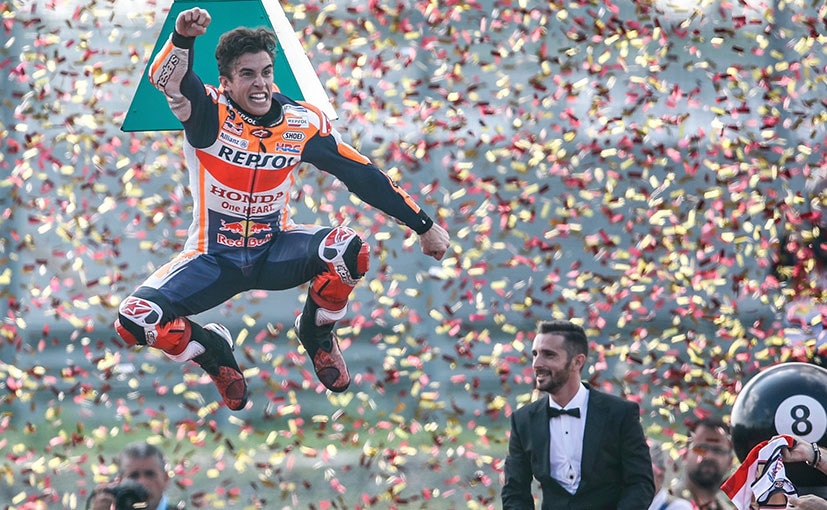 Marquez took the world title for 2019.

Coming in fifth was Alex Runs of Suzuki after battling it out with Dovizioso, while Petronas rider Franco Morbidelli showed impressive pace finishing sixth as defeated Suzuki’s Joan Mir and Yamaha’s Rossi for the position. The latter finished at P8 behind Mir, while Danilo Petrucci finished ninth on the second factory Ducati with LCR Honda’s Takasaki Nakagami coming in tenth. Pramac ducati rider Francesco Bagnaia of Pramac Ducati finished 11th, while teammate Jack Miller was forced to start the race in the pitlane and recovered to 14th. LCR Honda’s Cal Crutchlow took P12, followed by Pol Espargaro of KTM at P13, followed by Pramac Ducati’s Jack Miller at P24. Aprilia rider Andrea Iannone finished 15th taking the final point in the Thailand GP.

KTM’s Miguel Oliveira finished in 16th place followed by Avintia Ducati’s Tito Rabat. Honda’s Jorge Lorenzo was placed 18th with Avintia’s Karel Abraham in 19th place ahead of Tech3’s Hafizh Syahrin. The Thailand GP had two retirements including Aleix Espargaro on the Aprilia and Mika Kallio on the KTM. Emission test has been made more ‘rigorous’ which could cause price rises, says expert Why Vettel’s Ferrari mission isn’t over yet Watch the Real Ken Miles Race a Shelby Cobra in Vintage Footage from the Petersen
We and our partners use cookies on this site to improve our service, perform analytics, personalize advertising, measure advertising performance, and remember website preferences.Ok