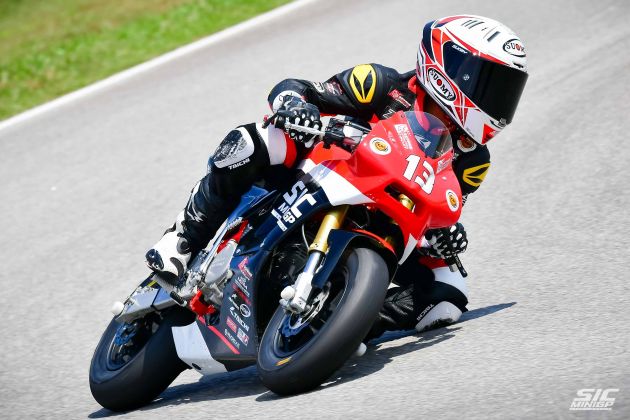 Budding Malaysian racer 14-year old Hakim Danish, riding under the SIC Racing Team umbrella, took back-to-back wins in the Coppa Italia Junior MiniGP championship in Pomposa, Italy. Setting the fastest lap during qualifying along the way, Hakim won both races one and two over the weekend September 4 and 5, the final round of the championship.

Racing in the OhVale 190 GP-2 Junior category, Hakim’s entry into GP2 Expert Pro class was based on his current campaign in the Honda European Talent Cup (ETC) in the 2021 FIM CEV Championship. The MiniGP racing category is a budget friendly racing category to allow young racers aged 10 to 14 to get a feel of racing in the Grand Prix style, but using sub-200 cc race machines at lower speeds on smaller tracks.

In the weekend’s race, Hakim went up against six other racers, all from Europe, on the 1.552 km circuit. In his debut racing year in Europe with Liqui Moly Intact SIC Racing Team, Hakim has been identified as a racer with potential by Dirk Reissman, team manager for Intact, who praised the Terengganu boy’s ability to fight through the field, going from 30th place on the grid to finish 12th in a race this season.