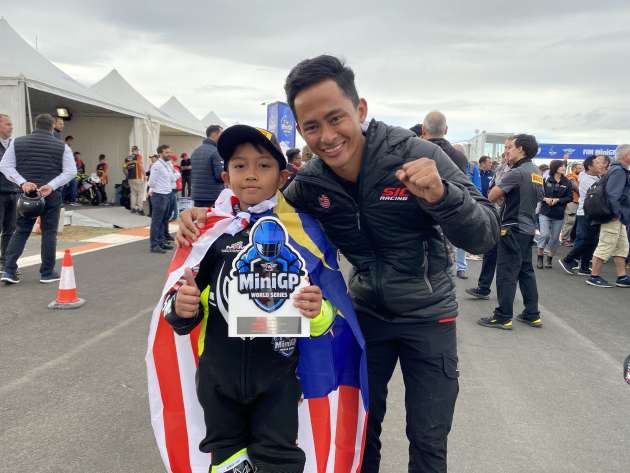 At the conclusion of the 2022 FIM MiniGP World Champiomship in Valencia, Spain, yesterday, Malaysia’s Qabil Irfan stands fourth overall in the riders’ championship standings. Icing on the cake was his third place finish in the Super Final, third race of the day, after his fifth place finishes in races one and two.

At the conclusion of the 2022 FIM MiniGP championship, Gabriel Fabio Vuono of Italy emerged overall champion, followed by Fynn Kratochwil of Germany in second and Seiryu Ikagami of Japan in third. “Today is a good day for Malaysian motorsports, we are at a good level,” said team manager Zulfahmi Khairuddin of SIC Racing.

Expressing thanks to his parents and supporters, Terengganu boy Irfan is grateful for the opportunity given to him and for his win and good results at MiniGP. 10-year old Qabil was crowned SIC MiniGP Junior Championship winner in 2021.